Built around 960 A.D. during the reign of the Chandela king Dhanga and originally dedicated to Adinatha, Parshvanatha Temple is one of the finest monuments of Khajuraho. 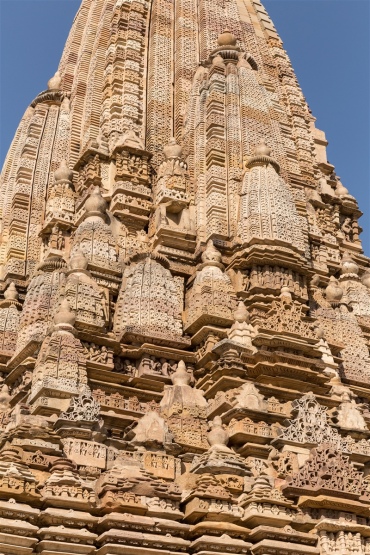 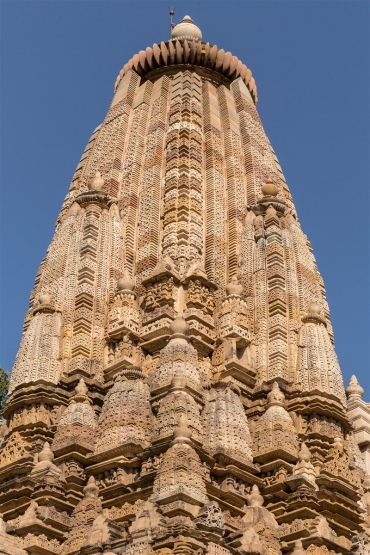 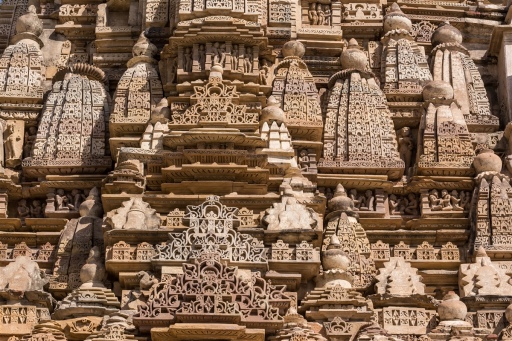 The temple is rectangular in plan, with two projections at opposite ends. The east projection serves as the entrance porch, the west projection comprises of a shrine that is attached to the rear of the sanctum. 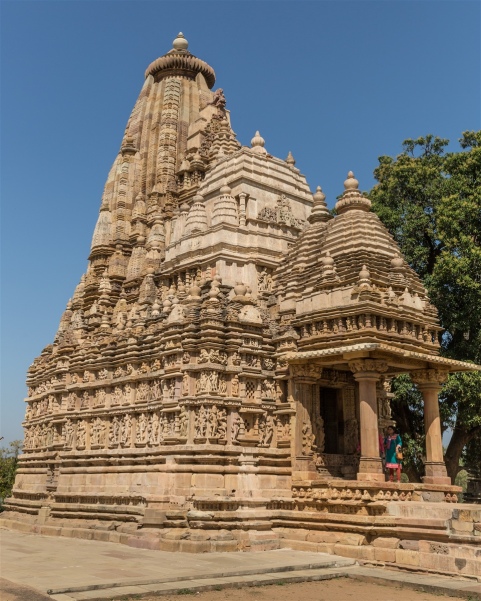 The Parshvanatha temple is known as sandhara temple, primarily as it has an inner ambulatory. However, unlike many other temples at Khajuraho, this temple has no transepts with balconied windows.  As a result, the outer wall of the temple is more solid, and the sculptors made maximum use of this blank canvas to apply their expertise.

The exterior of the temple has some beautiful sculptures, in particular of apsaras caught in the act of activities such as applying eye make-up and writing a letter. 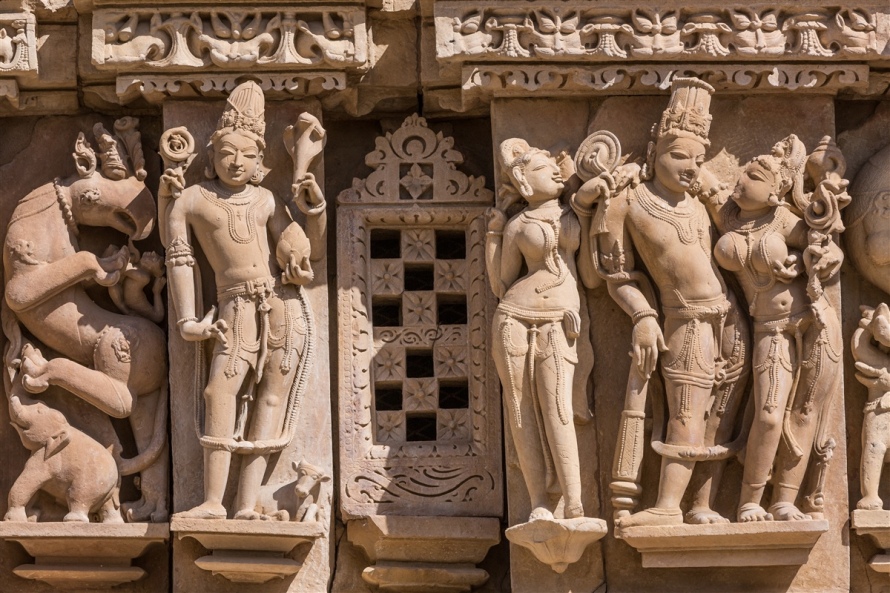 There’s also a vast array of vyalas with different heads, some of parrots, elephants, lions, and other creatures. The upper row of carvings is a little more animated, with flying figures, musicians, the scenes on this band are wide and varied. 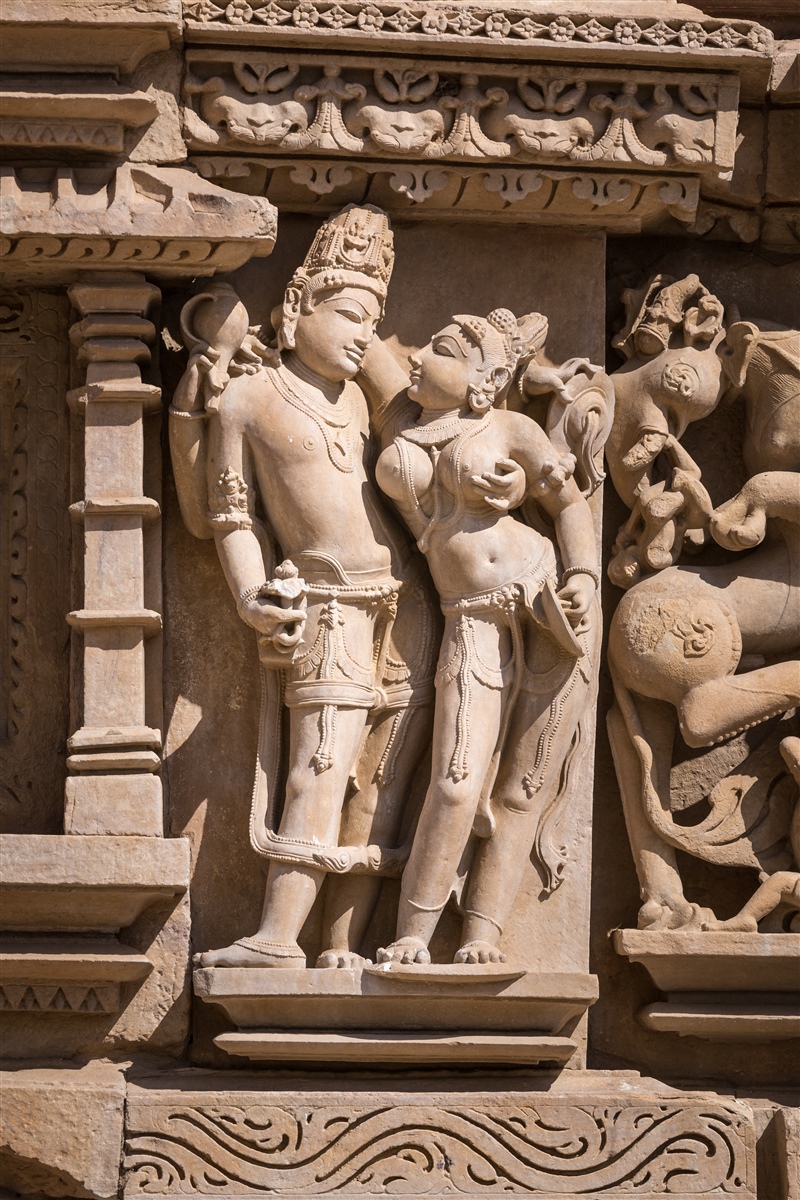 Nobody is quite sure why this Jain temple contains so many images of Hindu deities on the outside wall, it’s a theme also mirrored by the slightly later Adinatha Temple right next door.

The interior consists of a sanctum enclosed by ambulatory, a vestibule and a maha-mandapa with the entrance. The ceiling is wonderfully decorated. 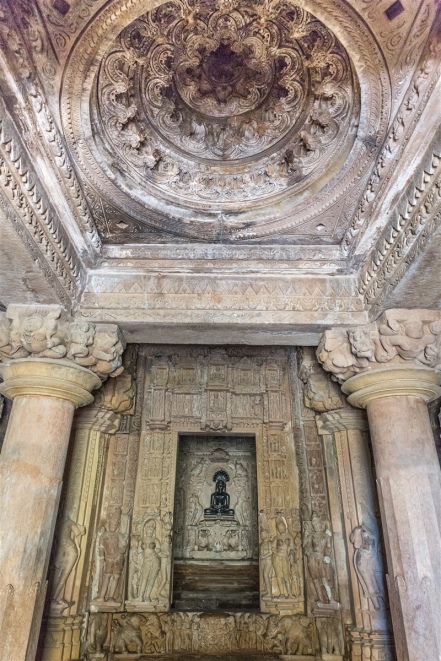 It is believed the earliest idol to be enshrined in the temple was that of Adinatha. When Major Alexander Cunningham visited the temple in 1852 he found the main sanctum empty, and described it as merely “Jainatha Temple”. He also noted that the temple was repaired by a Jain banker in 1847. 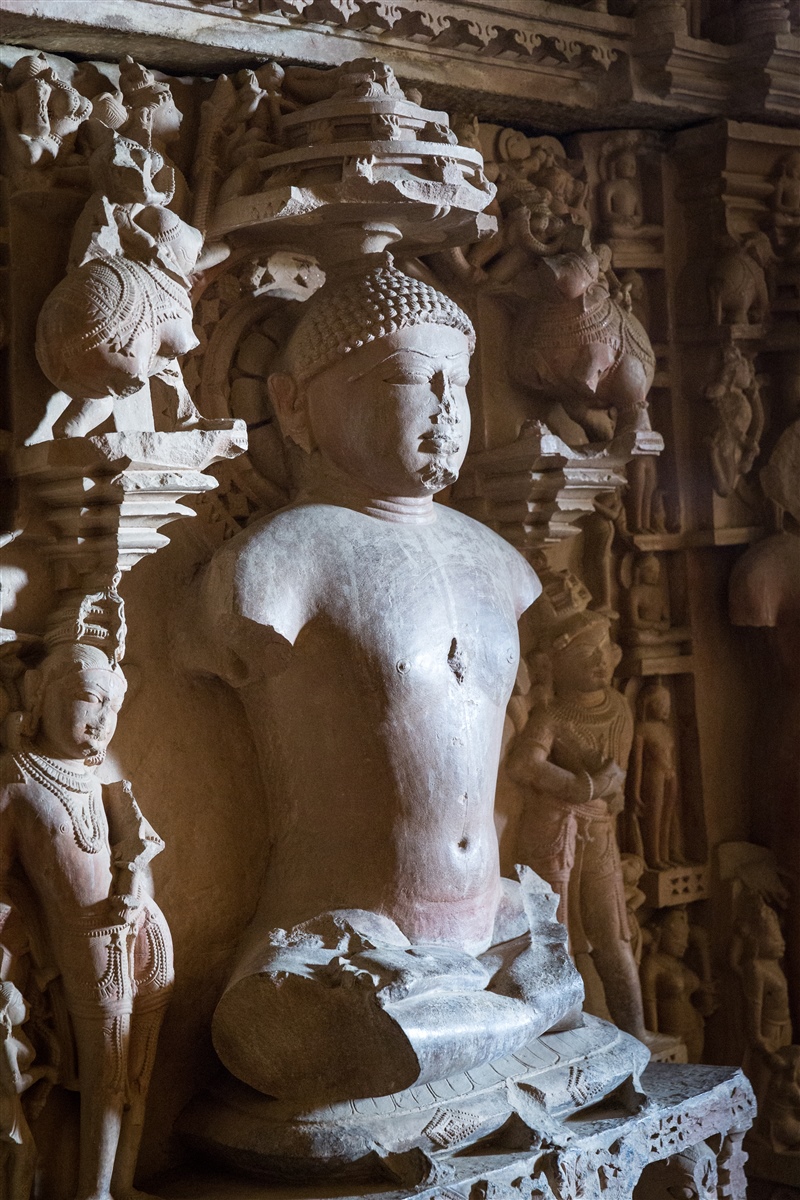 Thirteen years after these renovations, in 1860, a Parshvanatha idol was installed in the main sanctum. 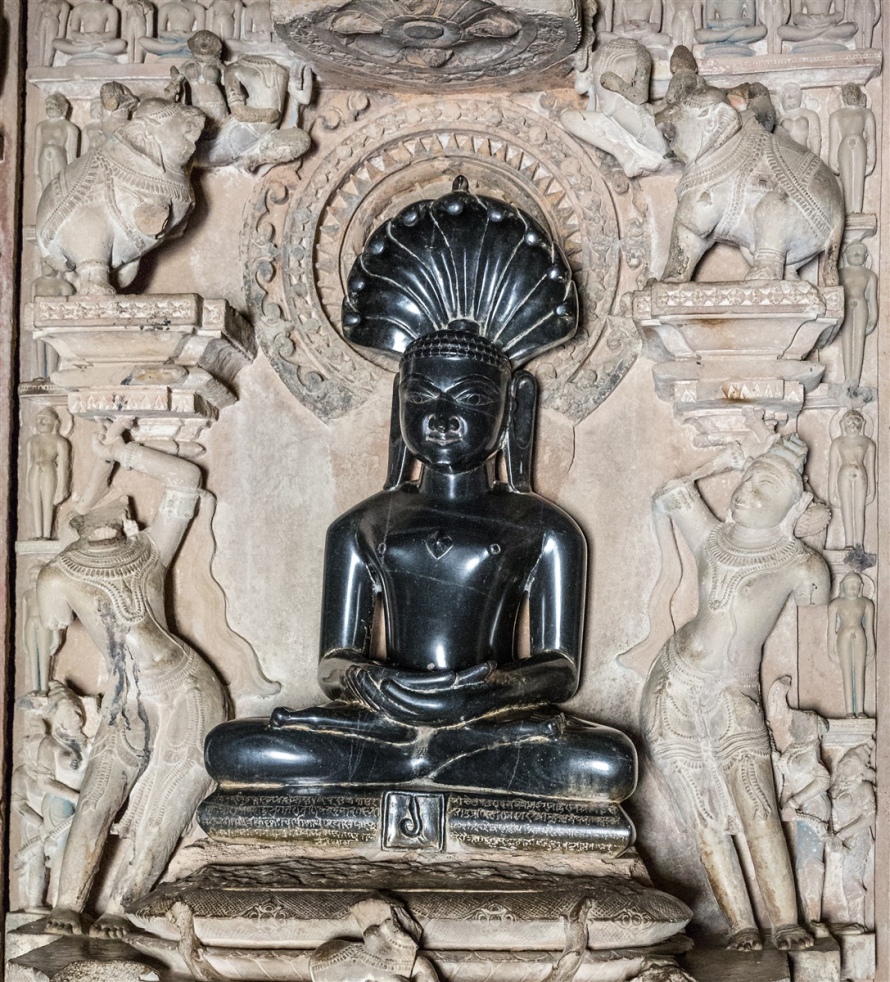 An inscription on the left door jamb of the temple records gifts and endowments of gardens by someone called Pahila. The gardens were named after their respective donors;   Pahila-vatika, Chandra-vatika, Laghuchandra-vatika, Shankara-vatika, Panchaitala-vatika, Amra-vatika and Dhanga-vadi. The inscription, dated to 954 A.D, further describes Pahila as a devotee of Jainism, and states that he was held in great esteem by king Dhanga. 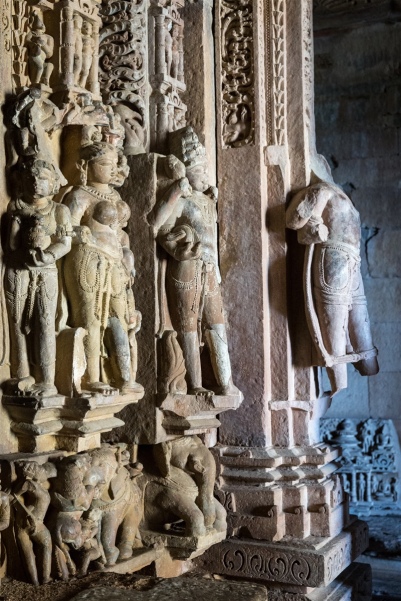 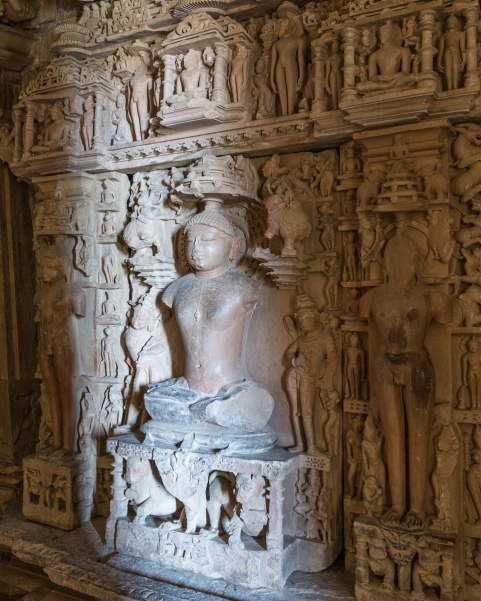 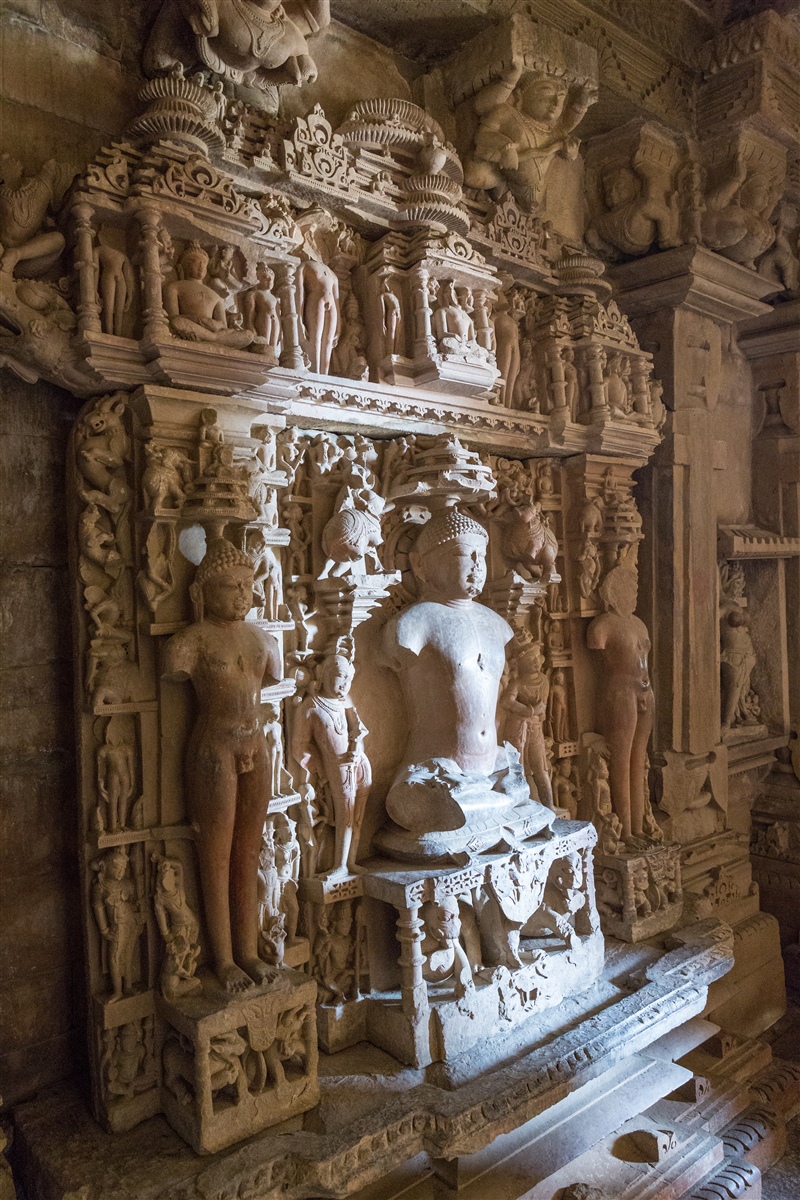 Back outside the temple, don’t forget to take a look at the shrine attached to the back of the sanctum. The image installed here is of Adinatha, who the temple was originally dedicated to. I presume this a later installation as Major Alexander Cunningham made no reference to it in 1852. 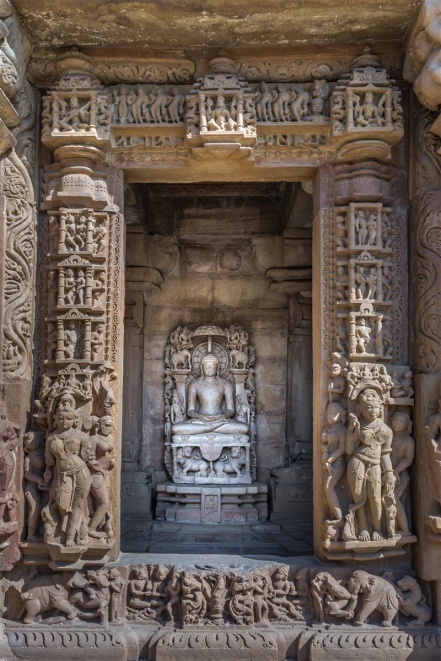 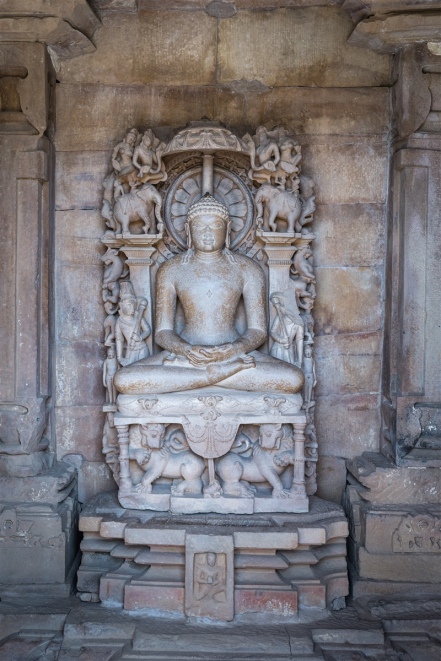