Situated away from but still classified as part of the western group of temples at Khajuraho, Chausath Yogini offers the visitor something a little bit different. This temple is a unique open-air sanctuary, considered to be one of the earliest shrines in Khajuraho, dating to around 885 A.D.

To reach the Chausath Yogini temple, turn right having exited the western group compound and at the far side of Shivsagar Tank turn right again. This lane follows the southern side of Shivsagar Tank, and when it forks take the right again with the tank remaining on your right hand side. After about 200m you will reach the temple platform on your left.

Dedicated to the Chausath (sixty four) Yoginis, essentially manifestations of the Great Goddess, unlike most other temples at Khajuraho that are made from Sandstone, this temple is constructed from coarse granite. The differences don’t stop there either, this is the only shrine at Khajuraho that is not aligned east-west, but is instead oriented north-east.

The Sanctuary stands on a lofty platform 5.4m high. It consists of sixty seven cells, of which only thirty five now survive, all of equal size except for one single larger cell. Each tiny cell is entered by a small doorway and roofed by a basic curvilinear shikhara. The single larger cell housed an image of Durga Mahishasuramardini inscribed with the label ‘Hinghalaja’, a goddess that is revered in many parts of northern and western India. 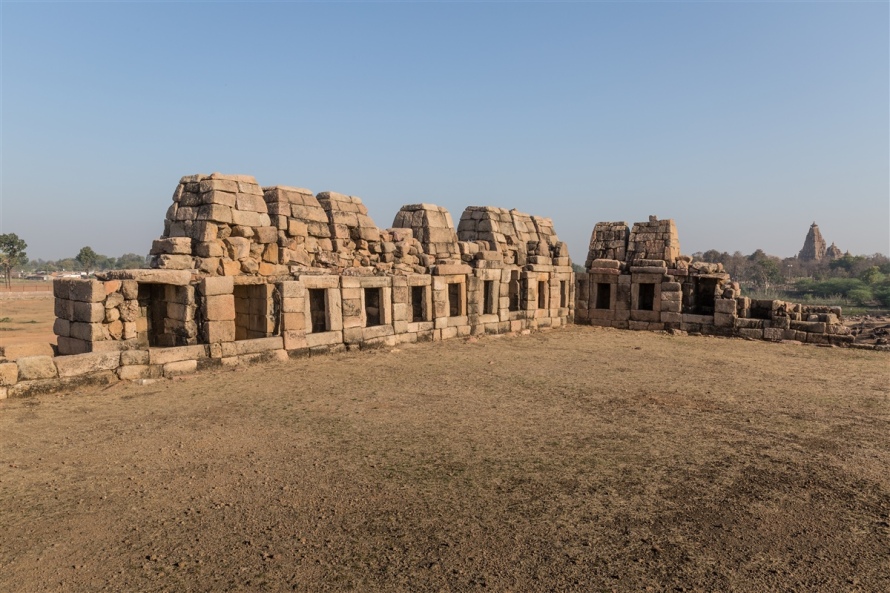 When Major Alexander Cunningham visited the sanctuary in 1865 only three images remained in their cells; the goddess Hinghalaja, with Brahmani and Maheshwari in cells either side. All these images are now safely in the site museum, along with an image of a dancing Ganesha that used to face the Chausath Yogini sanctuary. 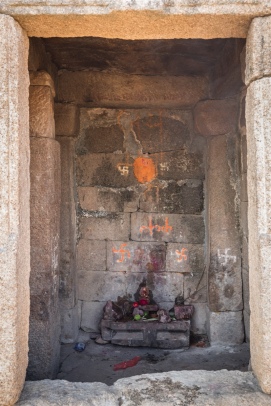 Although today the Chausath Yogini sanctuary at Khajuraho is bereft of images, during the Navratri festival associated with the great Goddess Durga, village women bring earthen pots with sprouted millet and place these around the central cell.