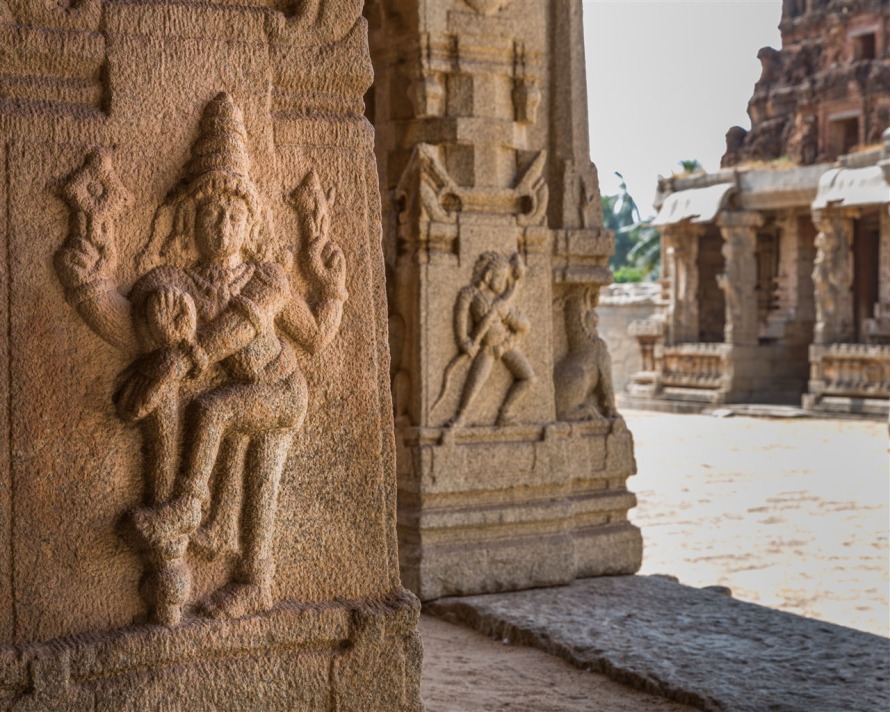 My approach to the Achyutaraya (also known as Tiruvengalanatha) Temple was from Vitthala Temple via a wonderful riverside walk.

The whole area is a mass of rocks and boulders, which provided the Hampi sculptors ample opportunity to demonstrate their skills. The entire route between the two temples is littered with small shrines, rock shelters, and the occasional relief carving on the bare rock.

It’s a great place to explore and take your time, but with little opportunity for shade be sure to be well covered and have plenty of water with you. 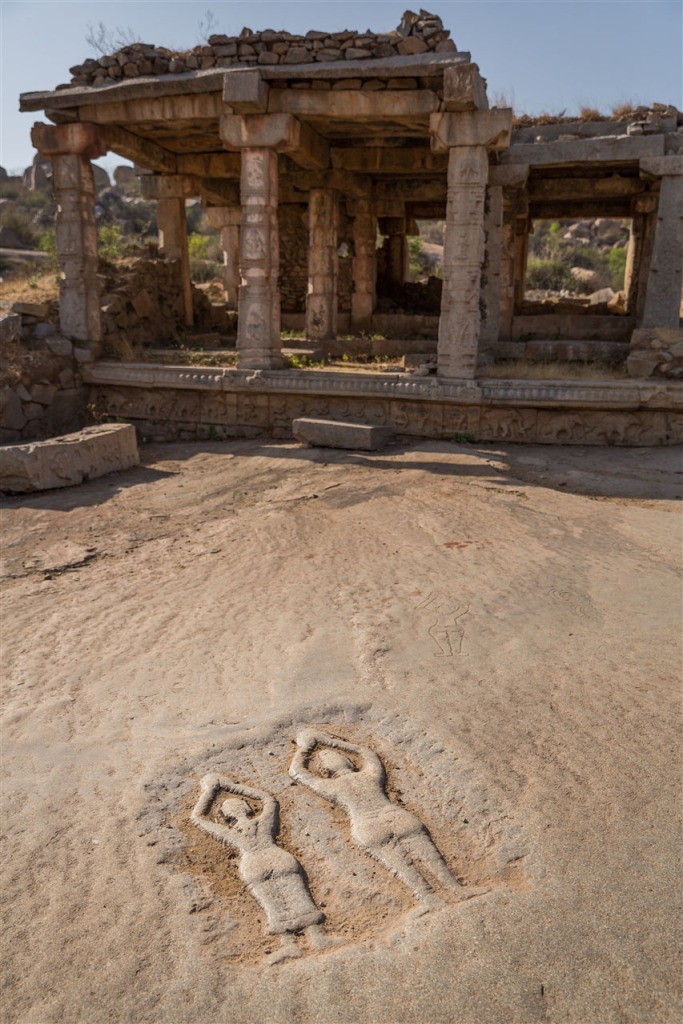 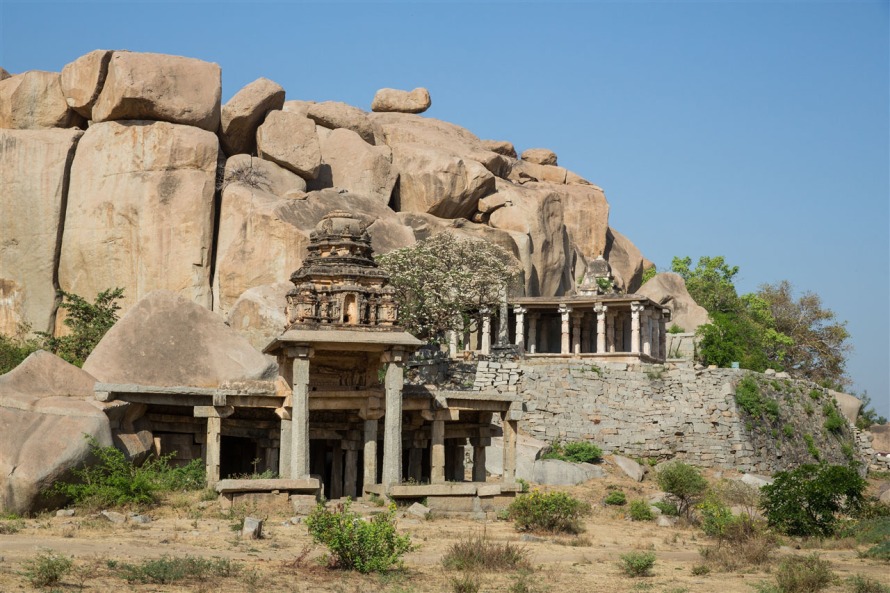 All along the river the twin gates of the Virupaksha Temple are in view far off in the distance, sign-posting the way and a reassurance that you’re not getting lost ! 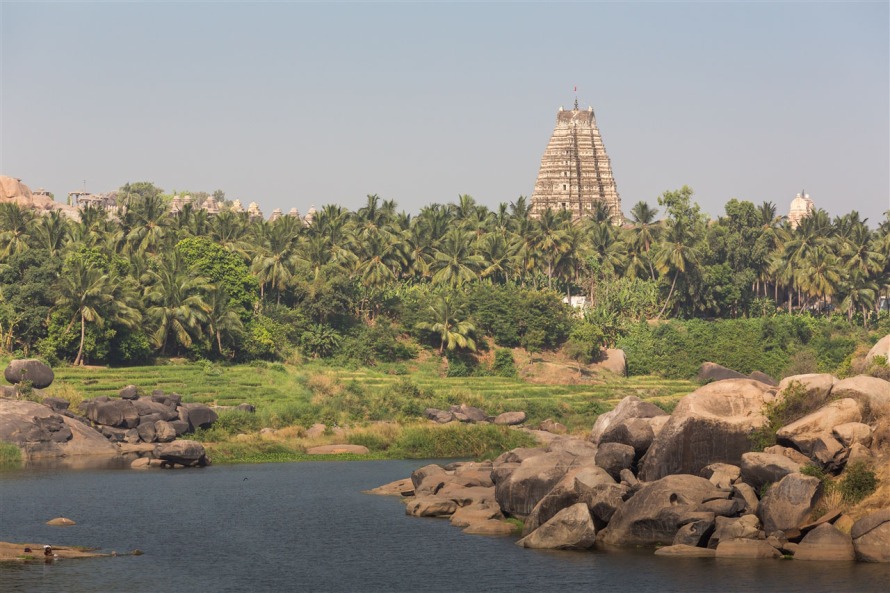 The final approach to the Achyutaraya Temple is via a 380m long colonnaded street, oriented north-south unlike the other three temple streets in Hampi that run wast-west. There’s the obligatory tank to explore and some interesting carvings on the pillars close to the temple entrance. 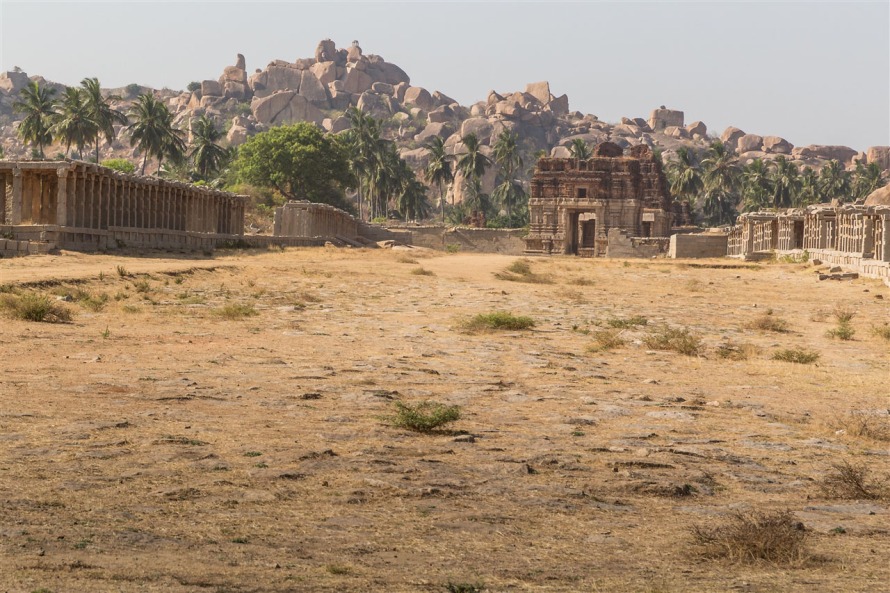 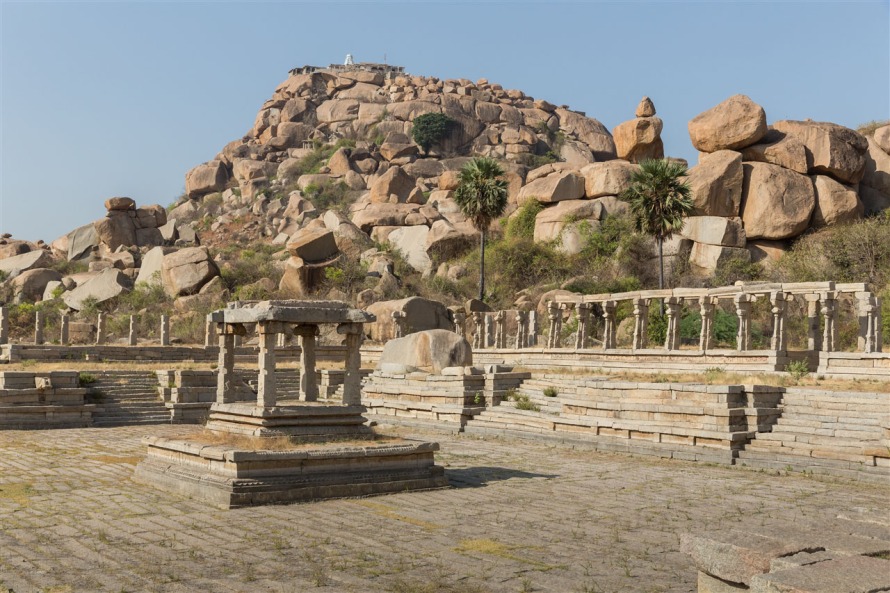 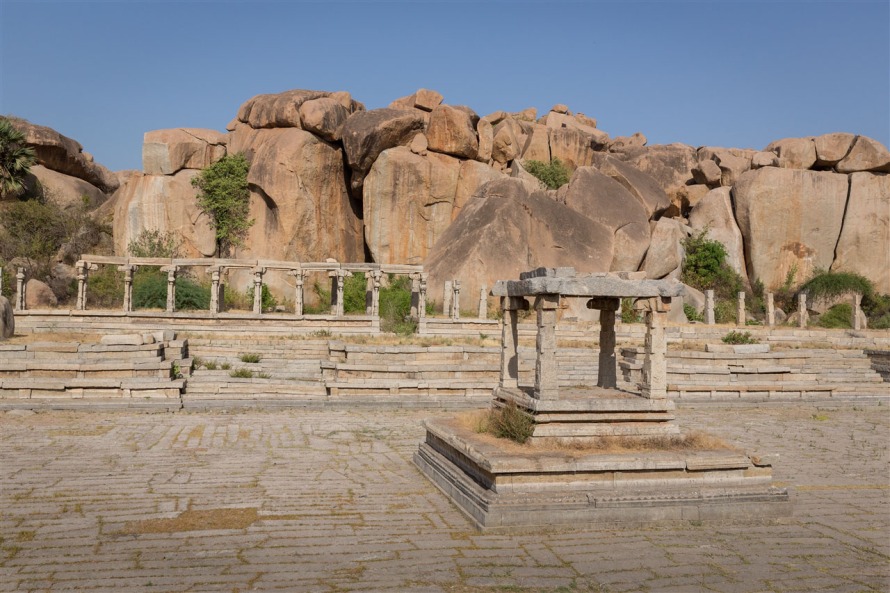 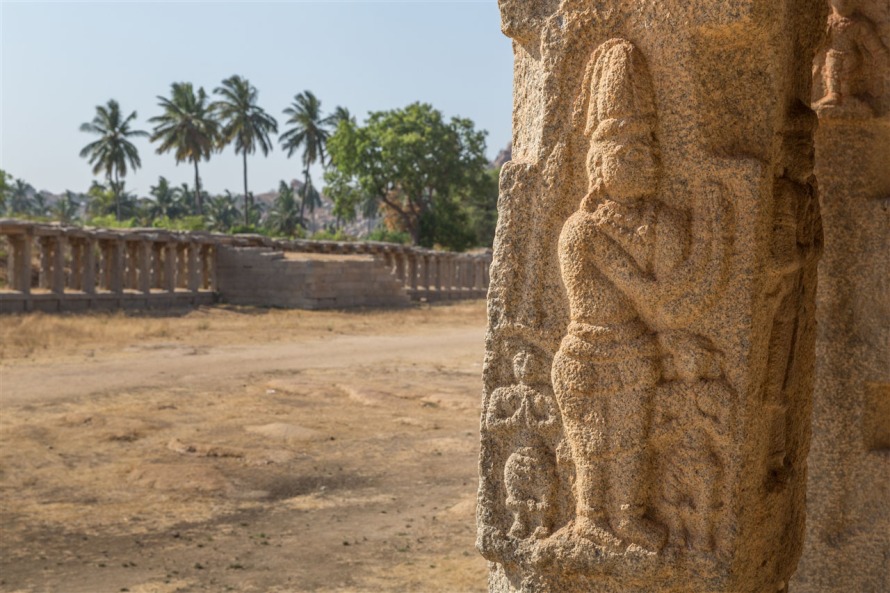 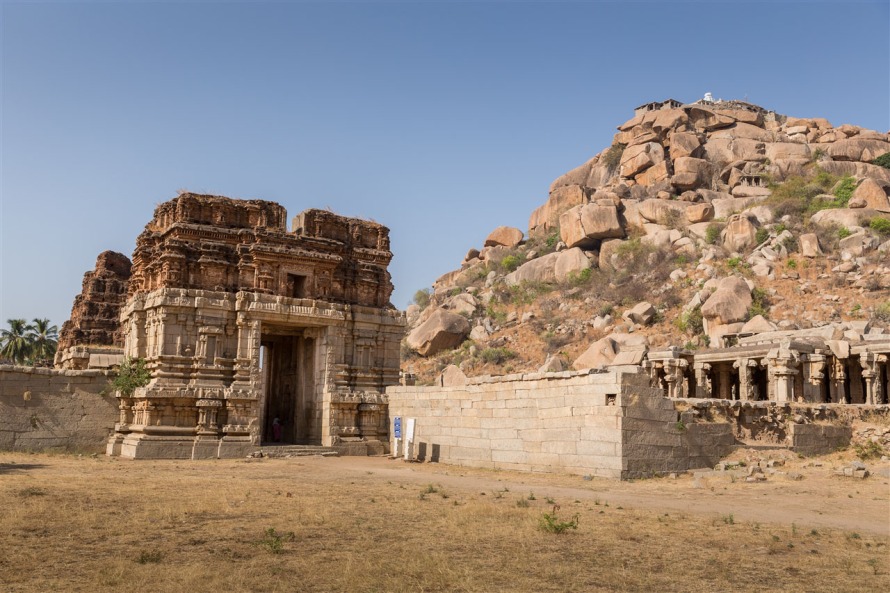 The Achyutaraya Temple was built in 1534, and is named after the king during whose reign it was built, although it is known from an inscribed epigraph that the king’s brother-in-law and chief minister, Hiriya Tirumala, was the patron. 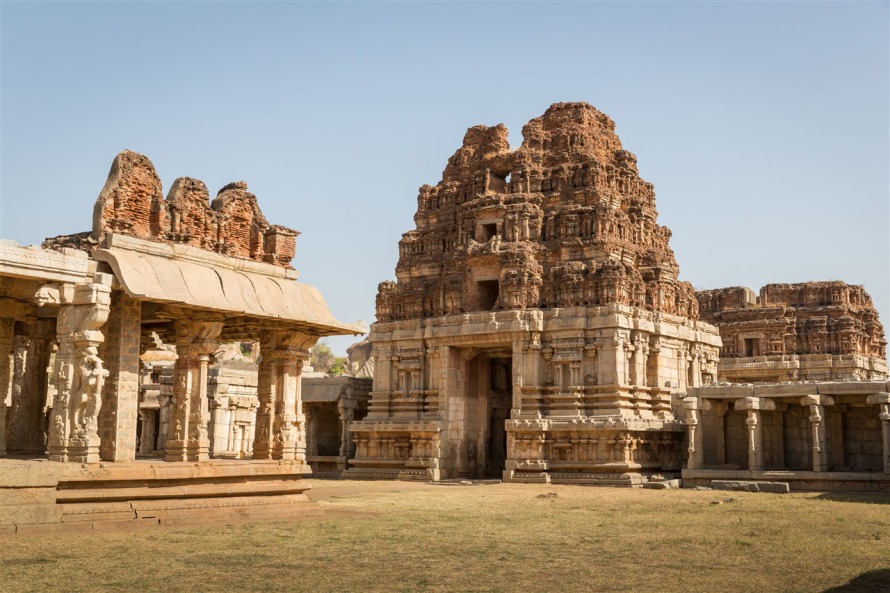 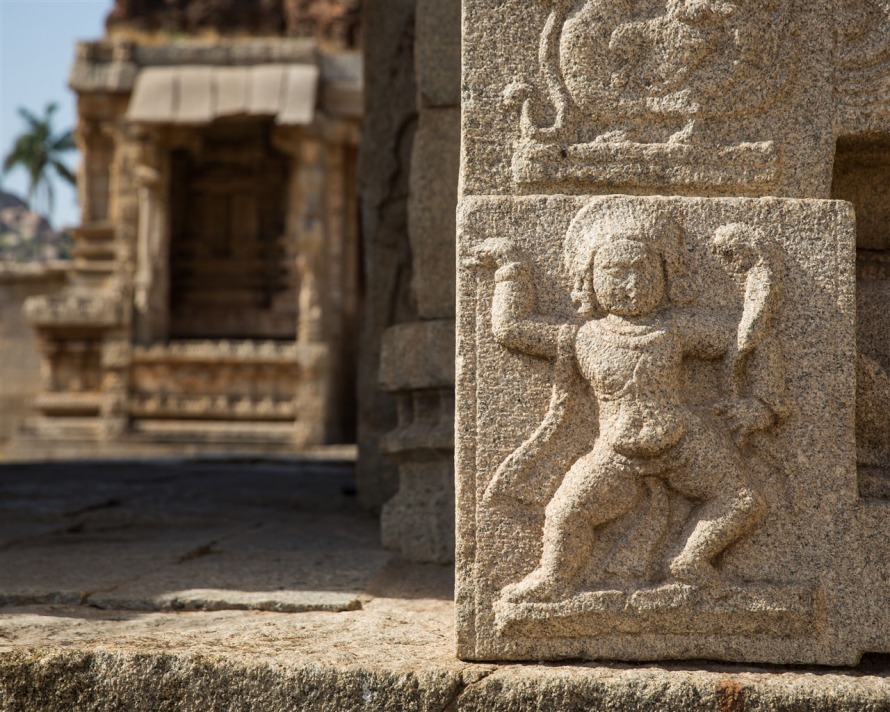 The Temple complex is one of the largest in the city, with a hundred-pillared hall containing some exceptional relief carvings. After experiencing so much of this earlier at Vitthala you might be thinking my camera would be less active, but you should know me better than that by now :).

The conditions for photography were pretty poor, probably as bad as it gets with the harsh piercing sunlight, but it takes a little more than that to deter me from at least making an attempt to capture what I saw. My addiction to temple art will never cease I suspect… 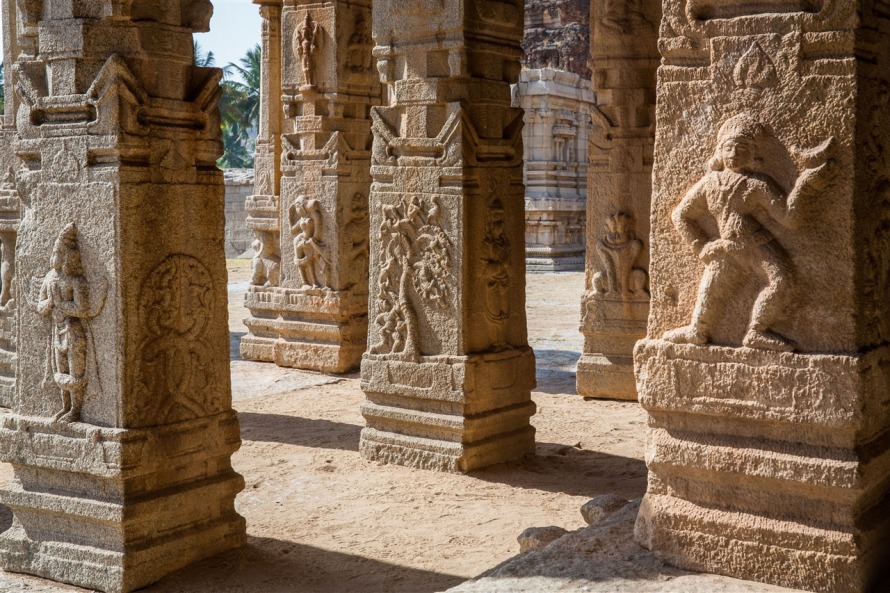 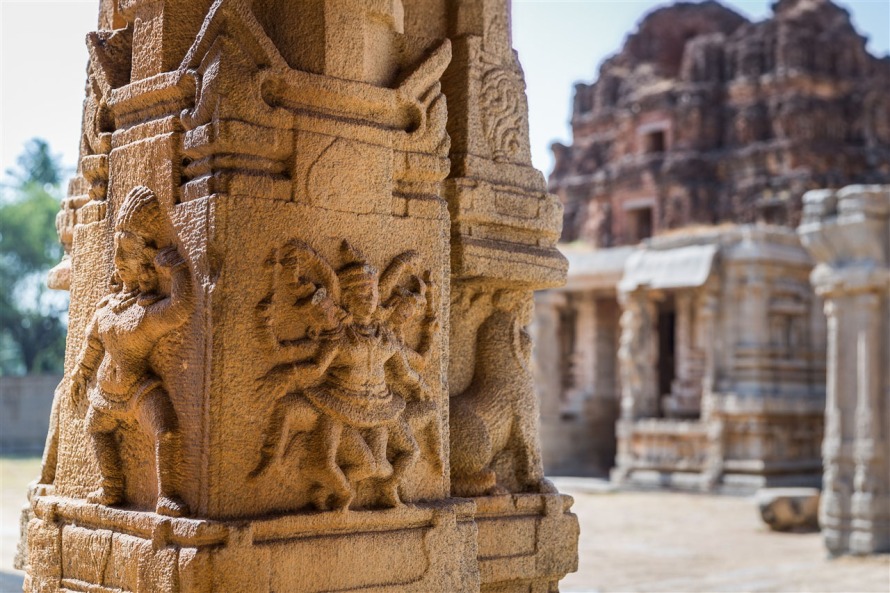 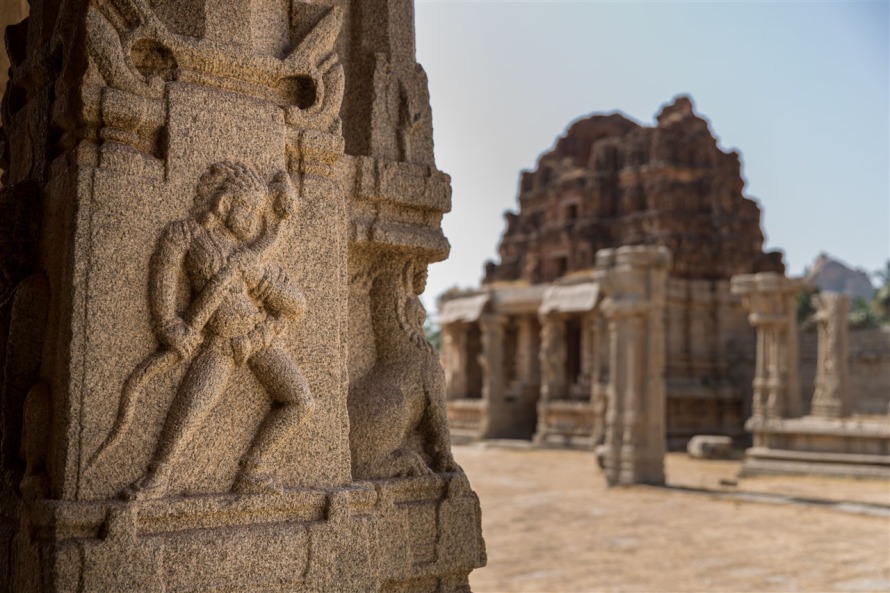 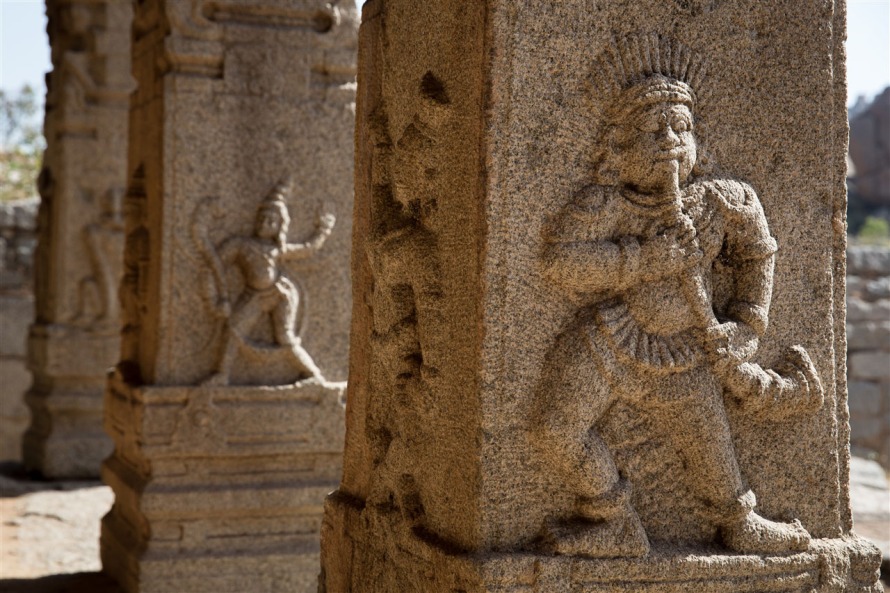 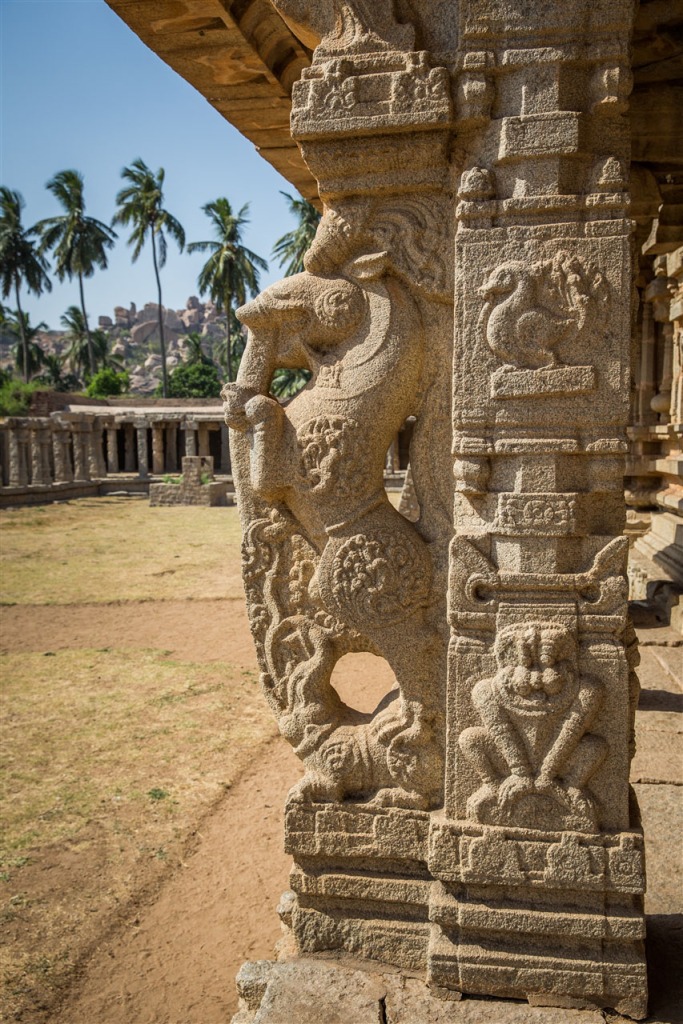 The south doorway leads to a path that winds around the south base of Matanga Hill into an irrigated valley, but there is also a path heading west that skirts the north side of hill. As well as offering a great view looking back at the Achyutaraya Temple, the path eventually takes you to where I consider to be the best location for photographing Hampi at sunset. More of that in my next blog… 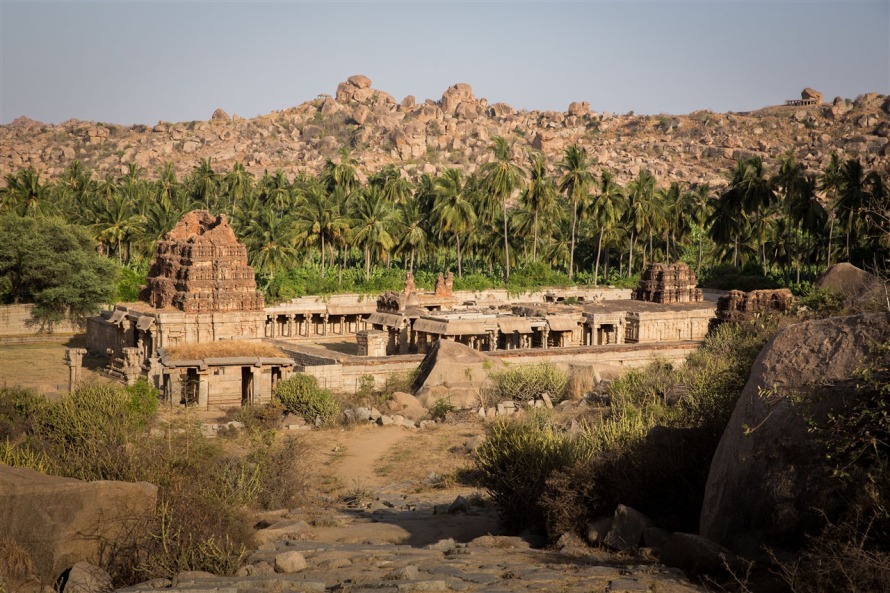 Retracing my steps back through the colonnaded street, I headed for the river side and a meandering path that eventually leads to the far end of Hampi Bazaar, the opposite end to Virupaksha Temple.

The path offers a magnificent vista of river, rocks and hills. It’s around here that according to local legend Vishnu propitiated Shiva by his penances and received from him the magical chakra (discus). It is also believed that this is where Lakshmana, Rama’s brother, crowned the monkey king Sugriva.

Once again more shrines and rock carvings can be explored, against the wonderful backdrop of the river and coracles, an ancient form of river transport that is still in use today. 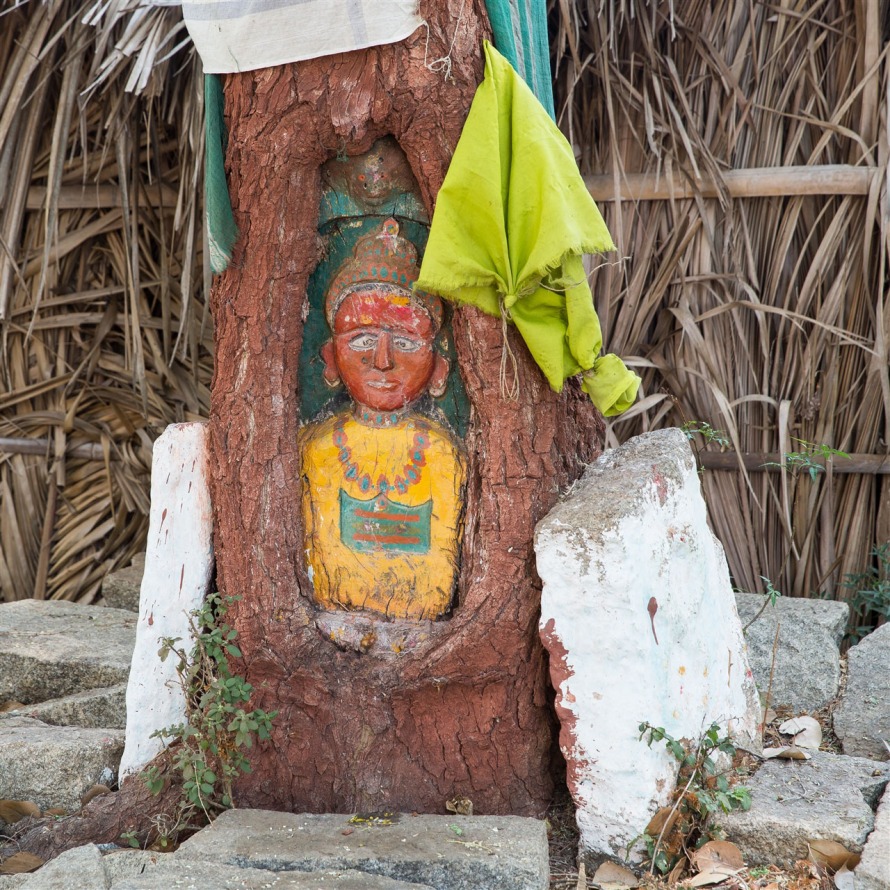 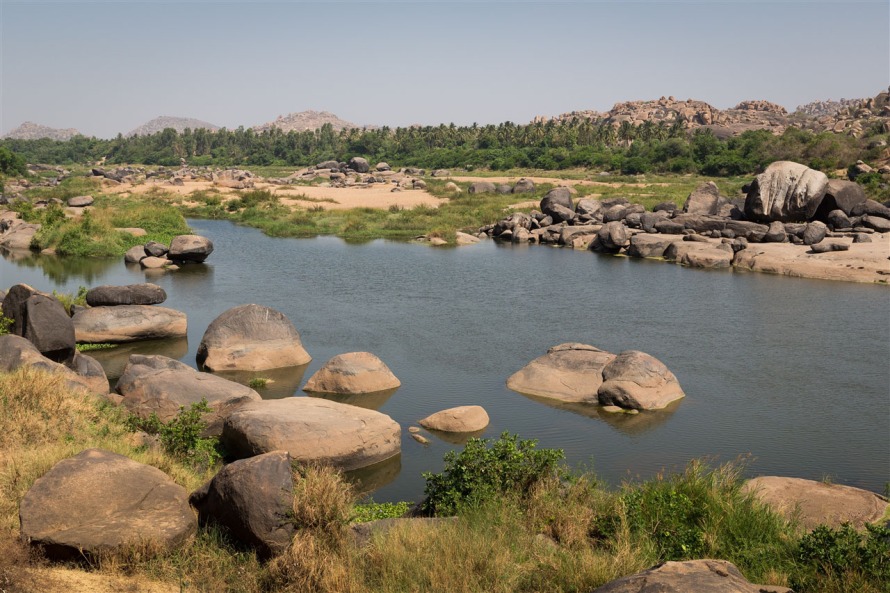 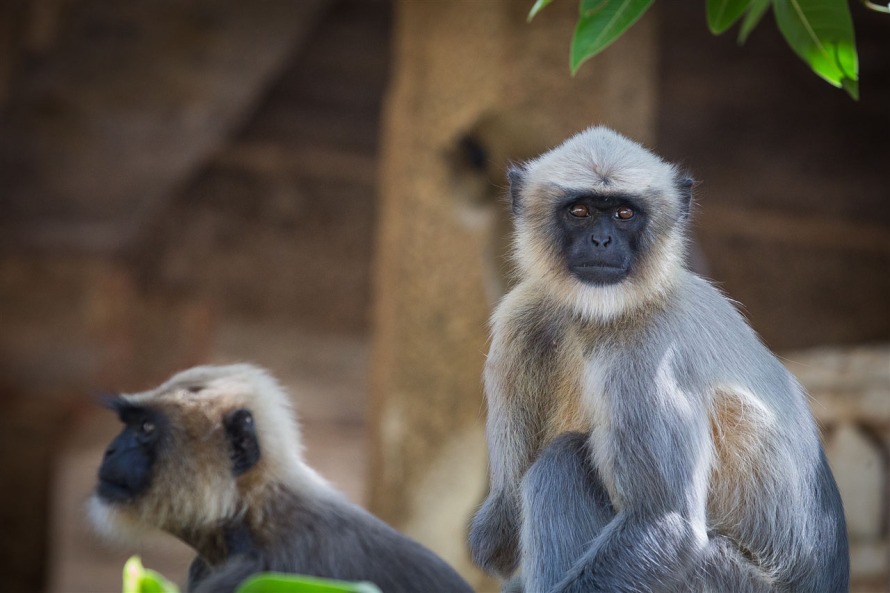 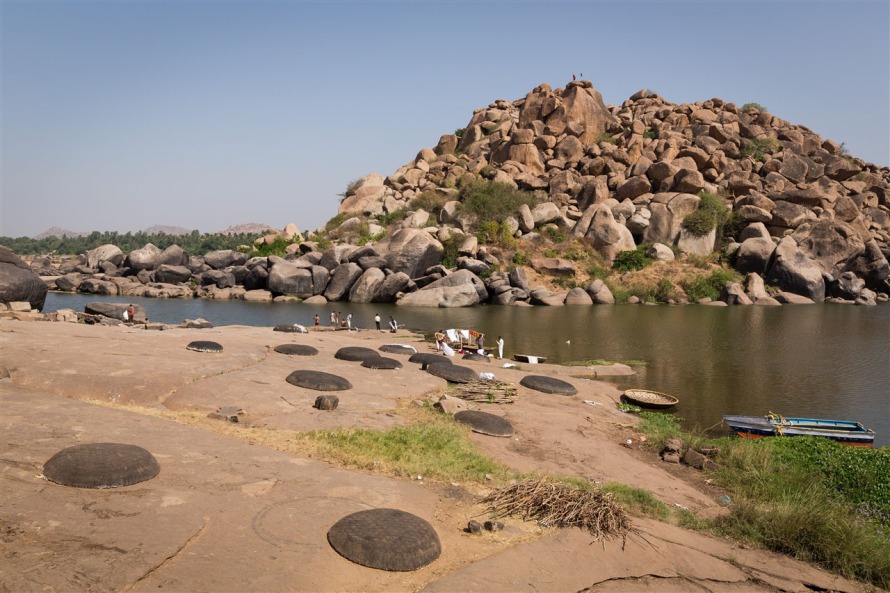 “…People cross to this place by boats which are round like baskets.Inside they are made of cane, and outside are covered with leather; they are able to carry fifteen or twenty persons, and even horses and oxen can cross in them if necessary, but for the most part these animals swim across. Men row them with a sort of paddle, and the boats are always turning round, as they cannot go straight like others; in all the kingdom where there are streams there are no other boats but these…”

Having started so early at Vitthala Temple and being on my feet all day in the sun, I decided to retreat back to the location I had scouted earlier to have a rest and watch sunset over Hampi.

I’d had an amazing day already, but the location for watching sunset exceeded all my hopes, it was the perfect way to end my exploration of Hampi’s sacred centre. More on that in my next post…