The Shore Temple is one of four primary locations worthy of exploration in and around Mahabalipuram, which include:

The Shore Temple was built between 700–728 A.D, and is so named because it overlooks the shore of the Bay of Bengal. It is a structural temple, built with blocks of granite, and is one of the oldest structural (versus rock-cut) stone temples of South India.

Approached from the west through ruined courts with Nando sculptures placed on the walls, the temple comprises a complex of three shrines. The original sanctuary is a small chamber that shelters an image of sleeping Vishnu, carved on top of a low granite boulder. 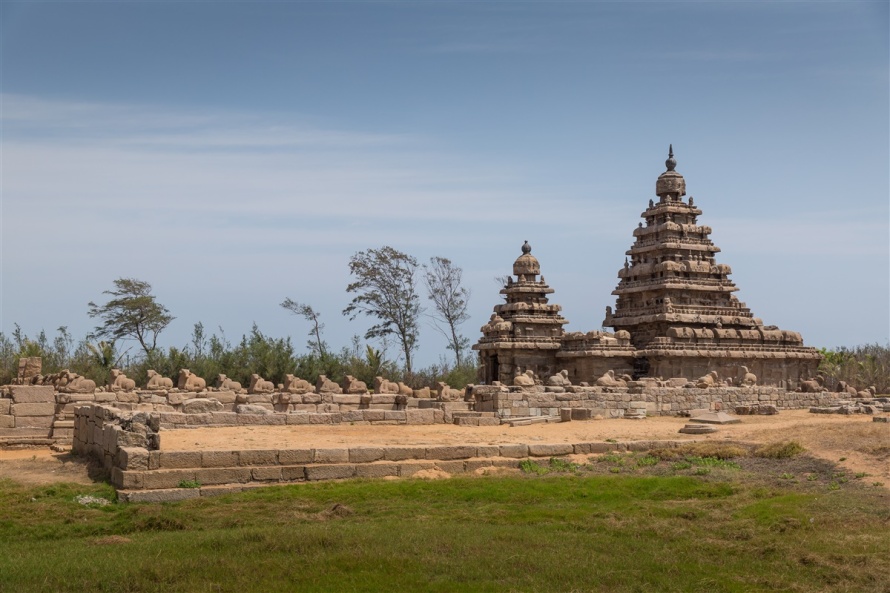 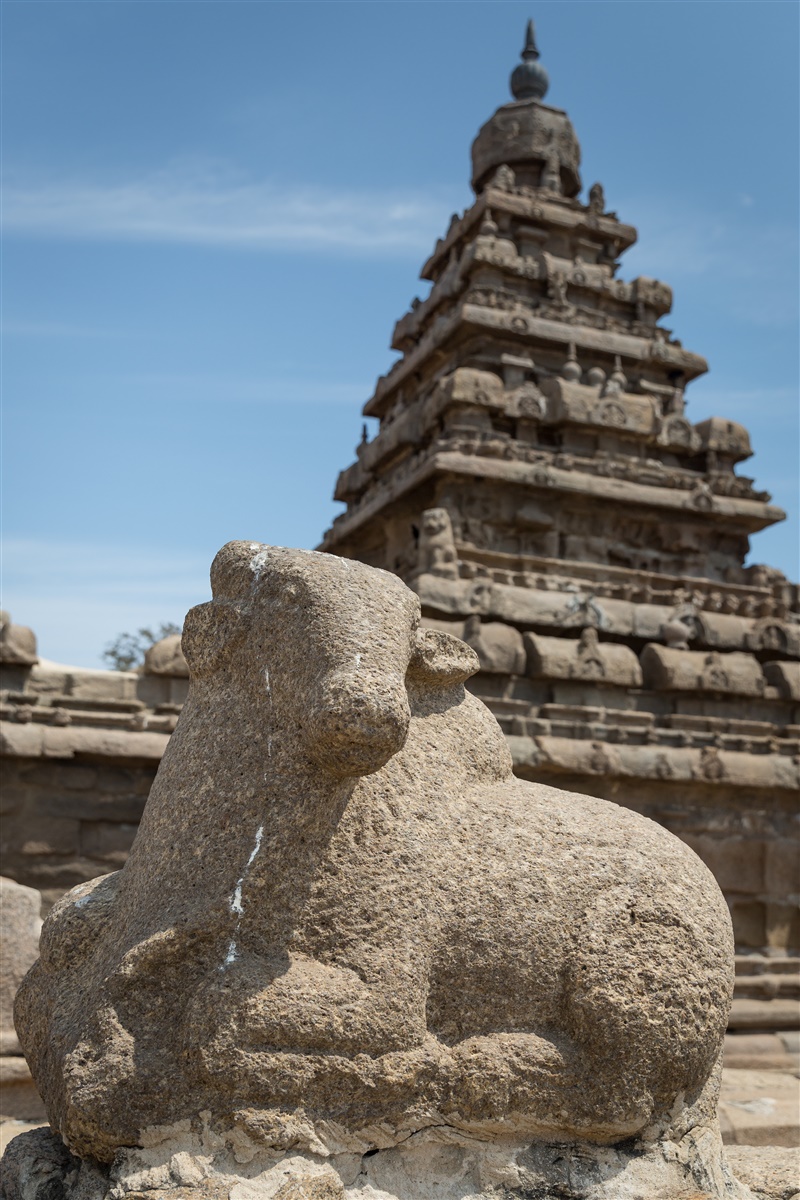 This structural temple complex is the culmination of the architectural creations that were initiated by the King Narasimhavarman I (popularly called as Mammalla after whom the Mamallapuram town is named), in mid 7th century starting with the Cave temples and the monolithic Rathas.

The main credit for the architectural elegance of the Shore Temple complex goes to King Rajasimha (700–28 AD), also known as Narasimhavarman II, of the Pallava Dynasty.

It is now inferred that this temple complex was the last of a series of temples that seemed to exist in the submerged coastline; this is supported by the appearance of an outline of its sister temples off the coast during the tsunami of 2004 which struck the coastline. The architecture of the Shore Temple was continued by the Cholas who ruled Tamil Nadu after defeating the Pallavas. 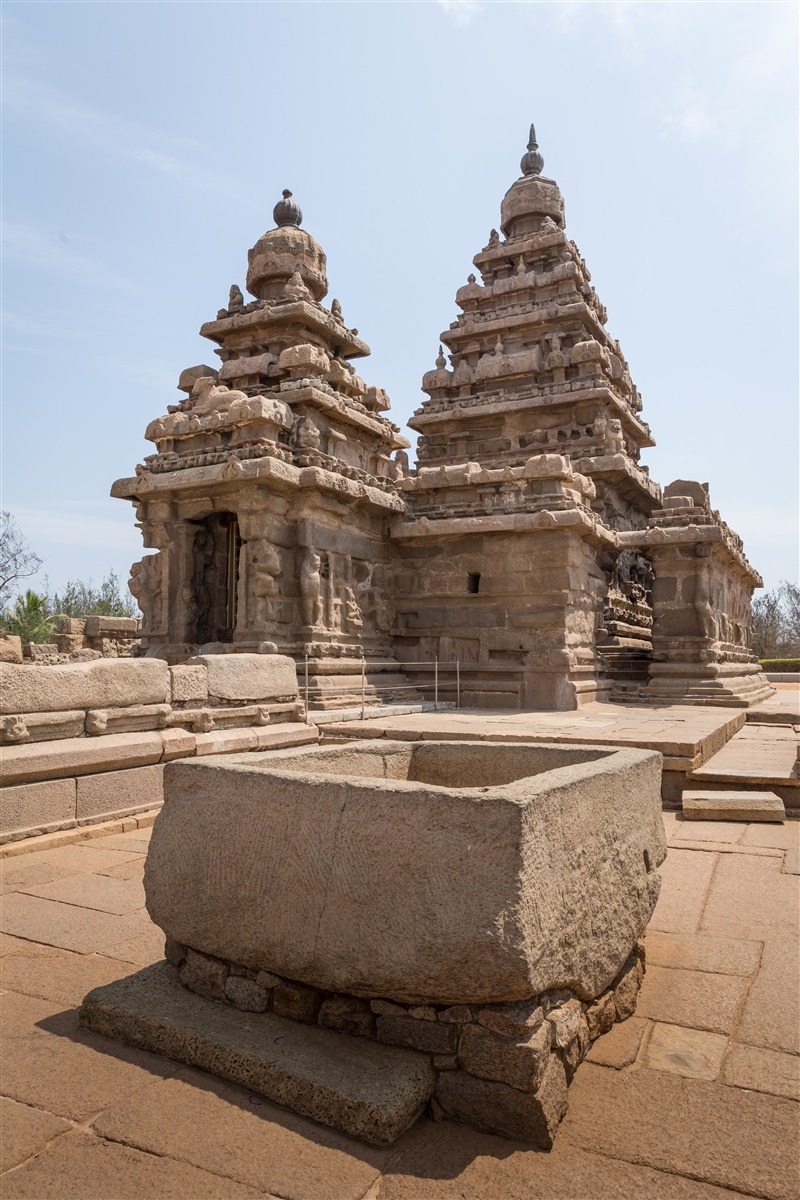 Although the tsunami of 26 December 2004 that occurred in the Indian Ocean struck the temple and the surrounding garden, the Shore Temple was not badly damaged, as the water level returned to its normal level within a few minutes. 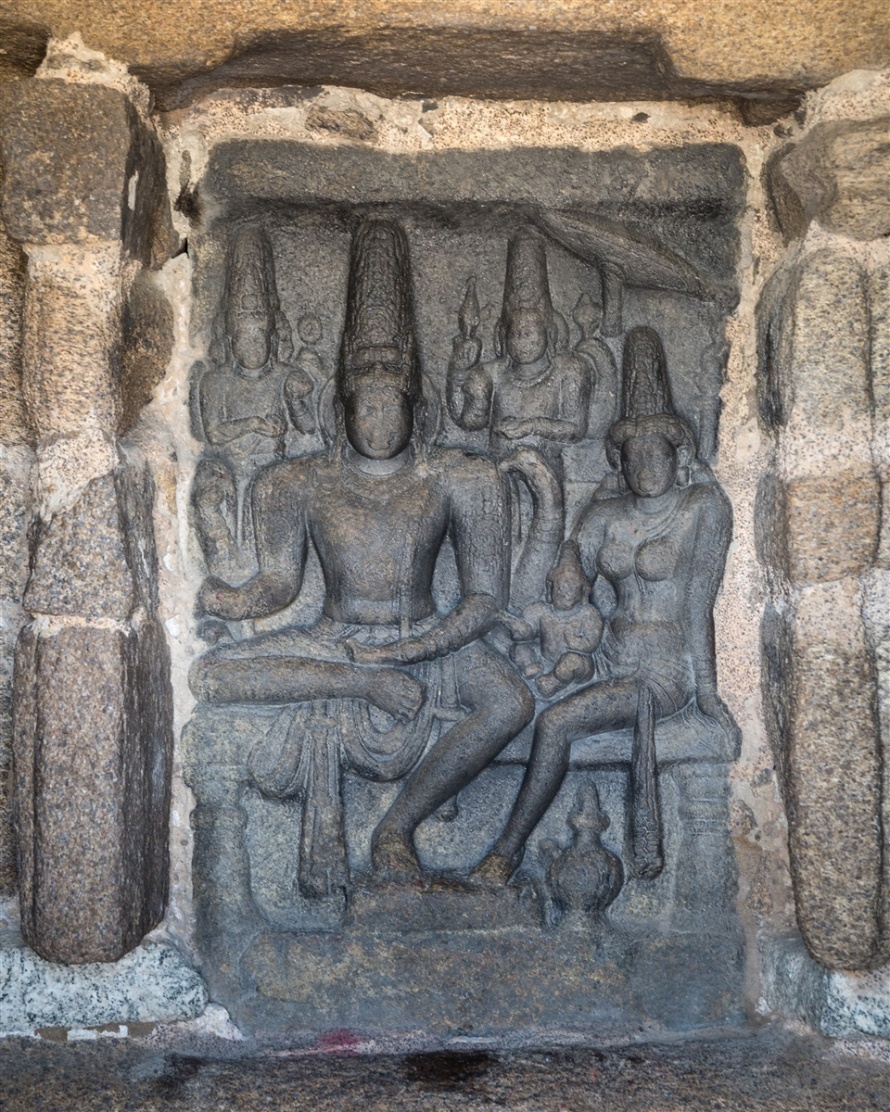 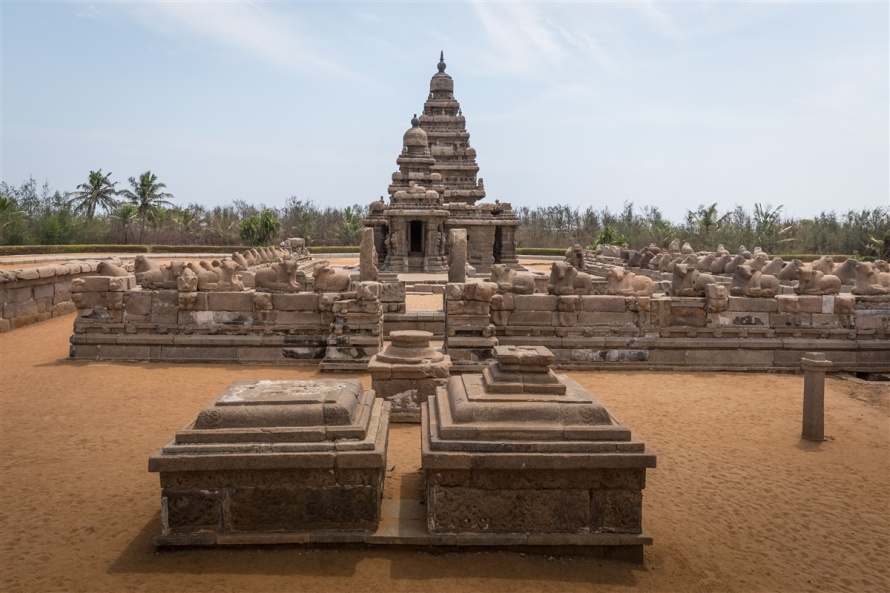 A monolith sculpture of a partly carved and partly sculpted lion with a hole in its torso is erected within the compound wall of the temple complex. A miniature image of Durga is sculpted on the back of the image, which is a depiction of Durga as Mahishasurmardini.

The open mouth of the lion is inferred as a representation of its role as the favourite mount of Durga. A female guardian with a bow is also carved on the leg of the lion.

In 1990, the Archaeological Survey of India (ASI) discovered a miniature shrine with a Bhuvaraha image in a well type enclosure. This is dated to the Pallava King Narasimhavarman Mamalla’s (638–660 A.D.) reign. It was enclosed with an elliptical well built during Rajasimha’s (700–728 A.D.) period. These are carved on the bedrock that also has the reclining Vishnu in the Shore Temple complex.

More discoveries seem to be on the horizon at Mahabalipuram. In March 2016 further research has been conducted along the shoreline, with the discovery of sunken temples and remains of an ancient port town.

“According to a legend, there were six other temples on the shoreline, along with the famous Shore Temple in Mahabalipuram. Together, they were called the Seven Pagodas of Mahabalipuram. They were built in the 8th century under Narasimhavarman II. The temples, along with its adjacent town and port, was submerged in 952 AD by a tsunami, some historians suggest.”