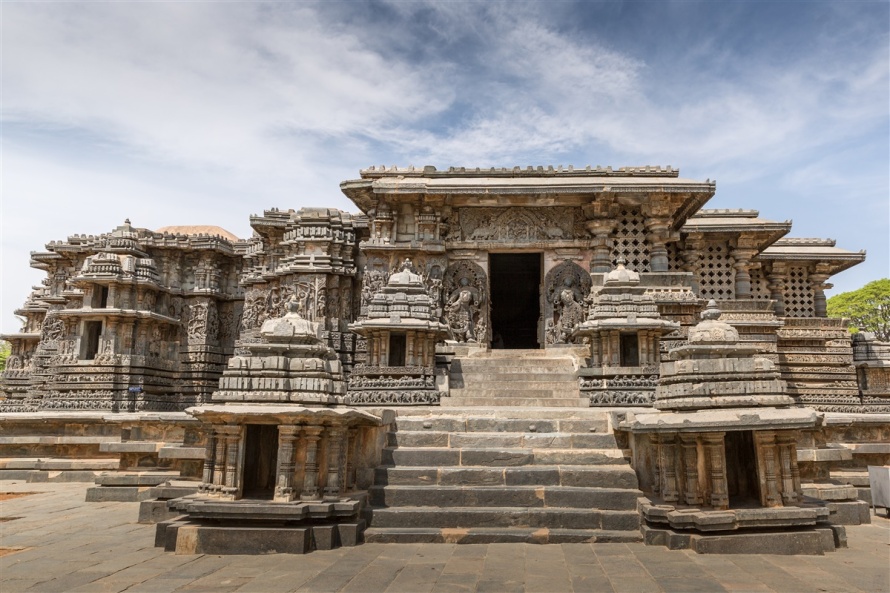 Halebidu, 14km east of Belur and 42km north of Hassan, is identified as Dorasamudra, the great Hoysala capital.

Vishnuvardhana (1108-1141 A.D.) was the first great ruler of Dorasamudra, and was responsible for expanding much of the Hoysala kingdom. Along with later rulers (Ballala II and Narasimha), military triumphs established the Hoysalas as the most powerful dynasty in Southern India. The territories under their control encompassed most of Karnataka and substantial parts of the Tamil lands. The dynasty declined at the beginning of the 14th century A.D. as they succumbed to Delhi invaders from the north.

The ramparts of the Hoysala capital, now overgrown and crumbling, enclose the city at almost 4km across. The granite walls interspersed with gateways and square bastions. The ramparts at the eastern extent overlook Dorasamudra, a vast tank after which the capital was named. Several monuments reside inside the walled enclosure, including remains of a palace, yet to be excavated.

The highlight of any visit to Halebidu is the double-shrined Hoysaleshvara Temple. 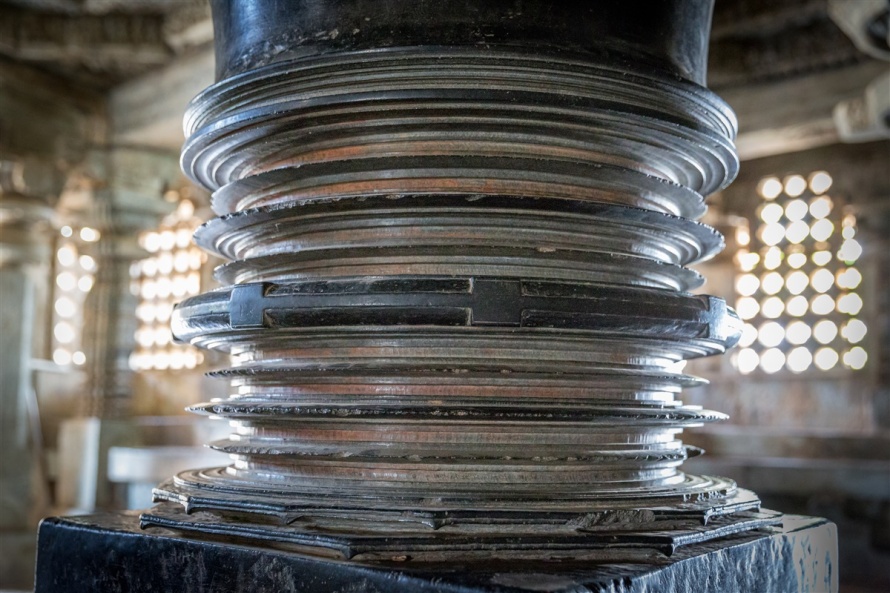 Begun in 1121 but not completed until the middle of the 12th century A.D, this temple represents the climax of Hoysala achievement and architecture. 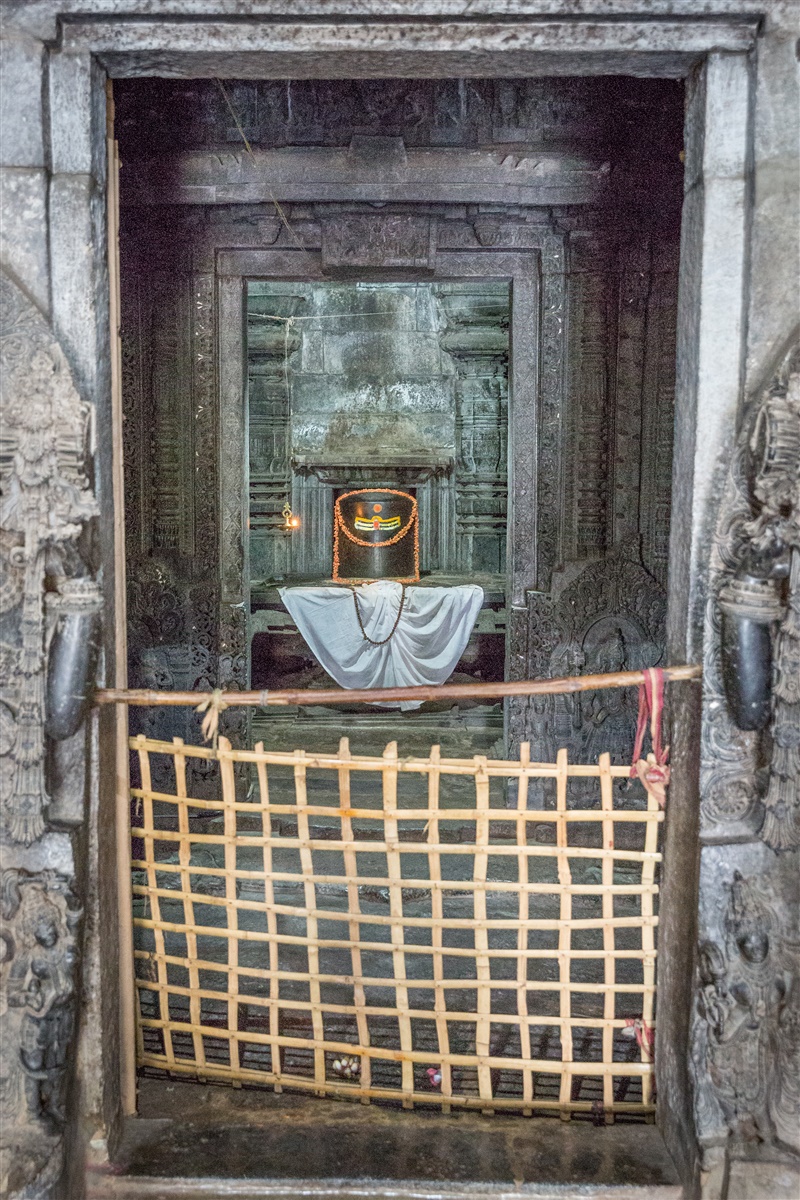 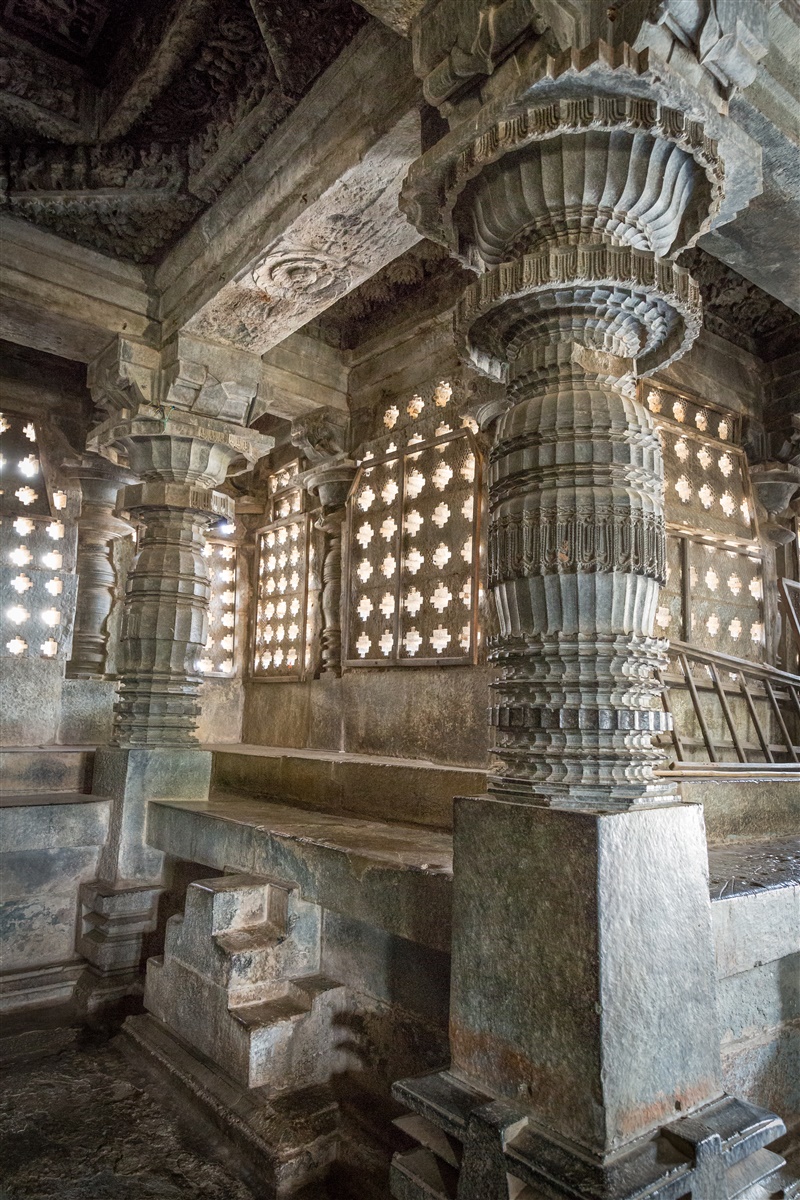 As at Belur, the temple is built entirely in grey-green schist. Each shrine consists of a central sanctuary with three side chambers opening off of a columned hall. The halls are partly open, which provides a spacious interior, with porches and balcony seating at the sides.

Throughout the interior are friezes depicting elephants, horses, lions, geese, along with scenes from the Ramayana and Mahabharata. The precision of the carving is simply amazing. 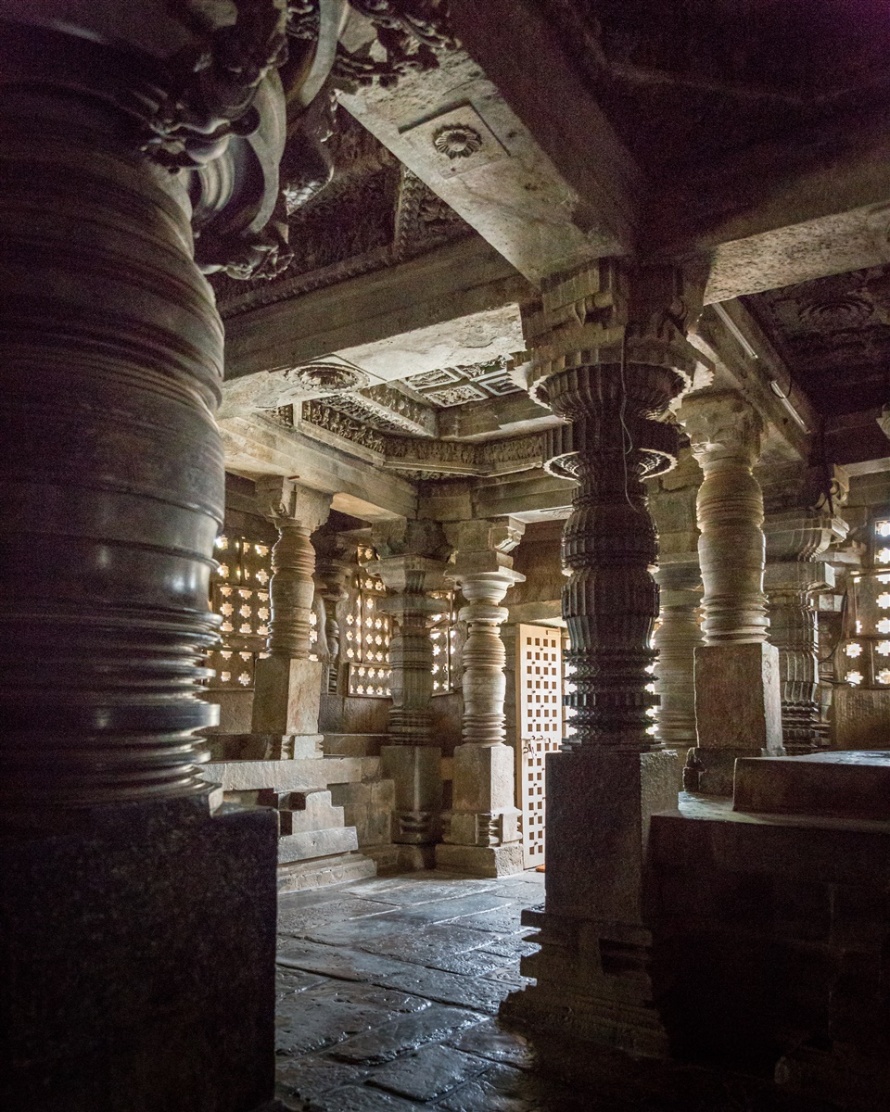 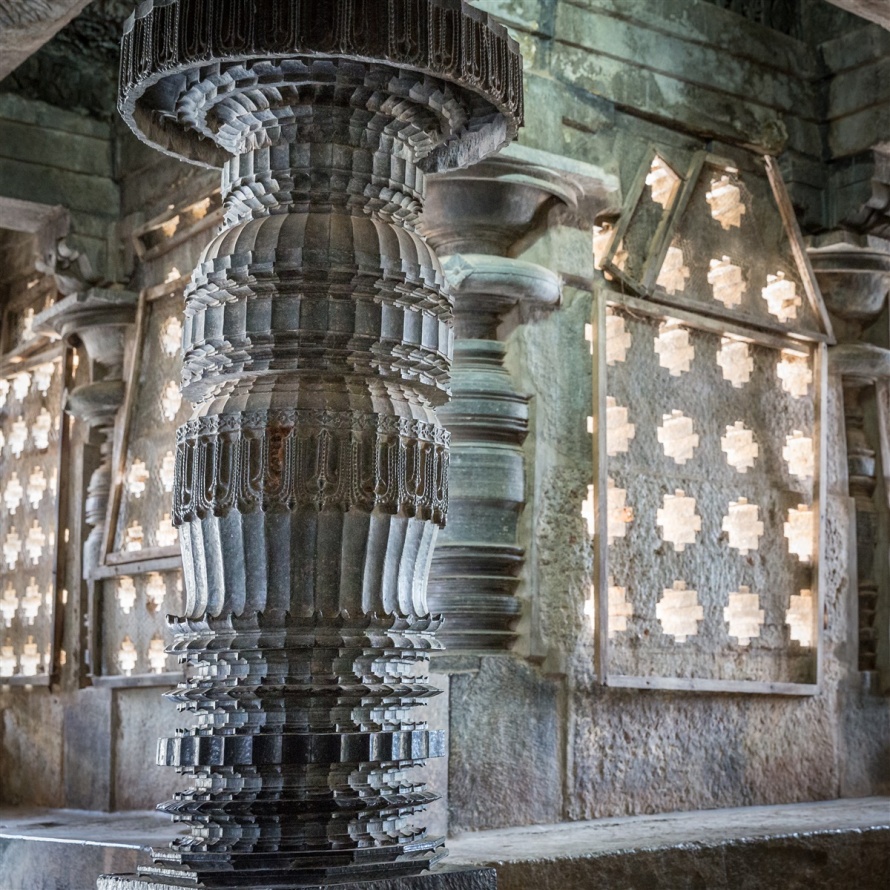 The quality and abundance of carvings only increases as you start to navigate around the exterior of the temple. Divinities in animated poses cover the outer walls, wearing richly decorated costumes and headdresses. 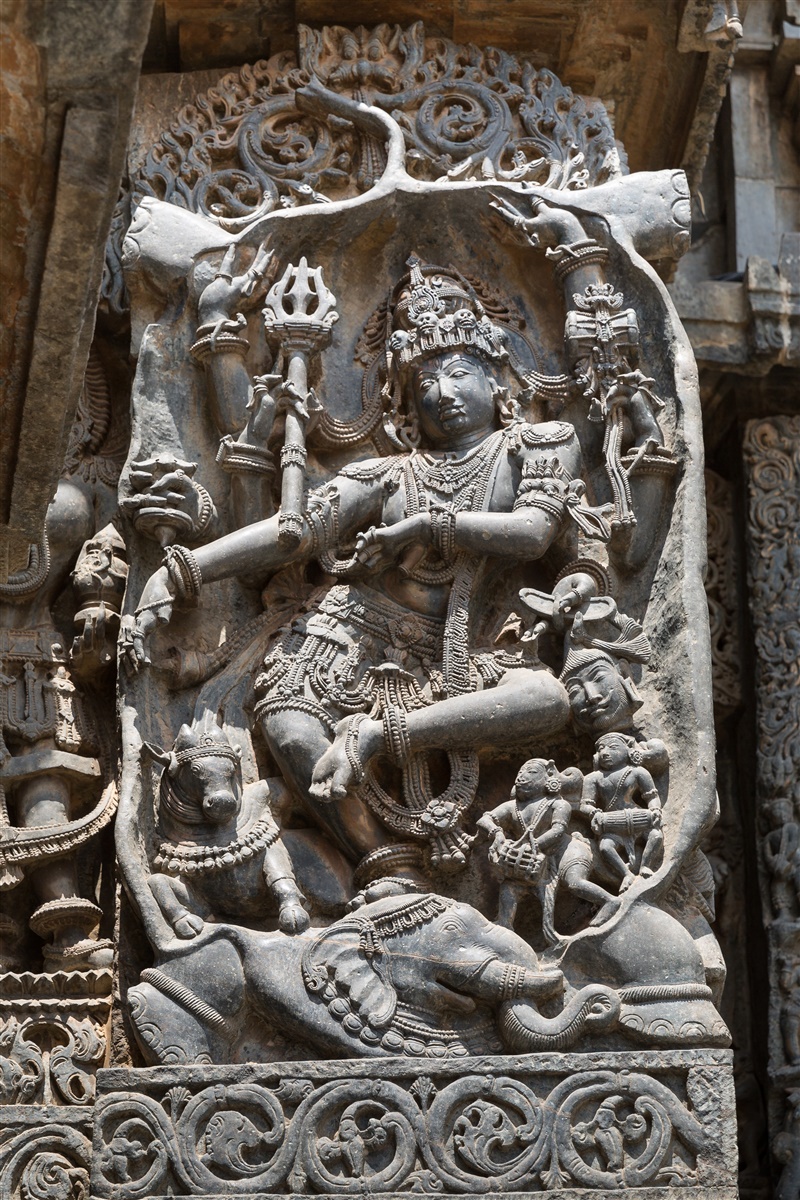 The scenes depicted is almost overwhelming. You may find yourself touring around the outside of the temple multiple times, as every circuit seems to reveal detail and scenes that passed you by on previously.

Below the sculptures runs a frieze that continues all around the temple to the base of the structure.

Going from the bottom where the temple wall meets the platform, the lowest frieze depicts charging elephants which symbolize strength and stability, above which, in order, are friezes with lions which symbolize courage, floral scrolls as decoration, horses symbolizing speed, another band of floral scrolls, depictions from the Hindu epics, mythical beasts called “makara” and finally a frieze with hansas (swans). It is said no two animals are alike, and in a total frieze has a span of over 200 metres (660 ft). 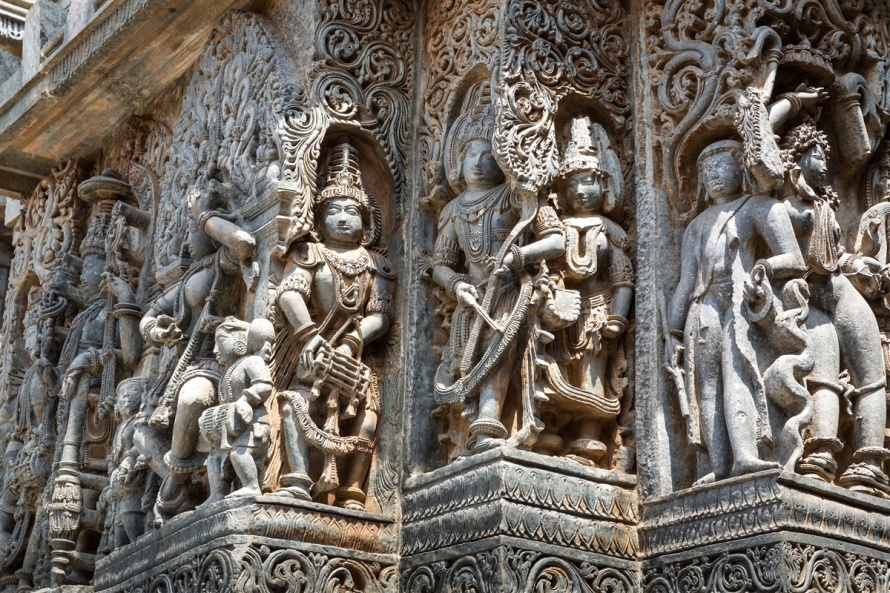 Among the finest sculpture panels are Shiva dancing inside the flayed skin of the elephant demon, Krishna holding up Govardhana to protect the herds, Krishna again playing the flute, Shiva dancing on a dwarf, and Ravana shaking the mountain. Unfortunately, not all of these I successfully captured :(. 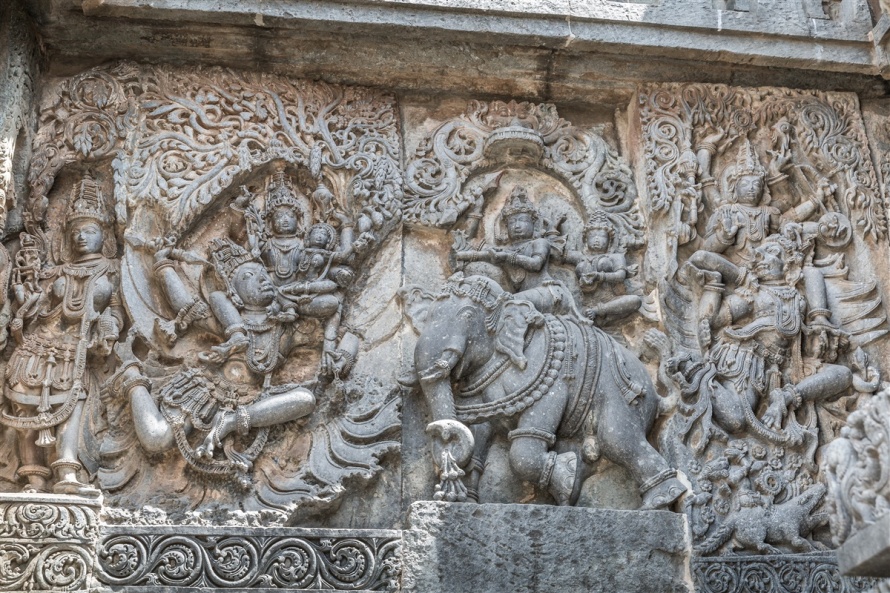 The hall doorways are approached by flights of stairs flanked by miniature shrines with pyramidal towers. Swaying guardians with jewels and tassels are positioned either side of the doorways. 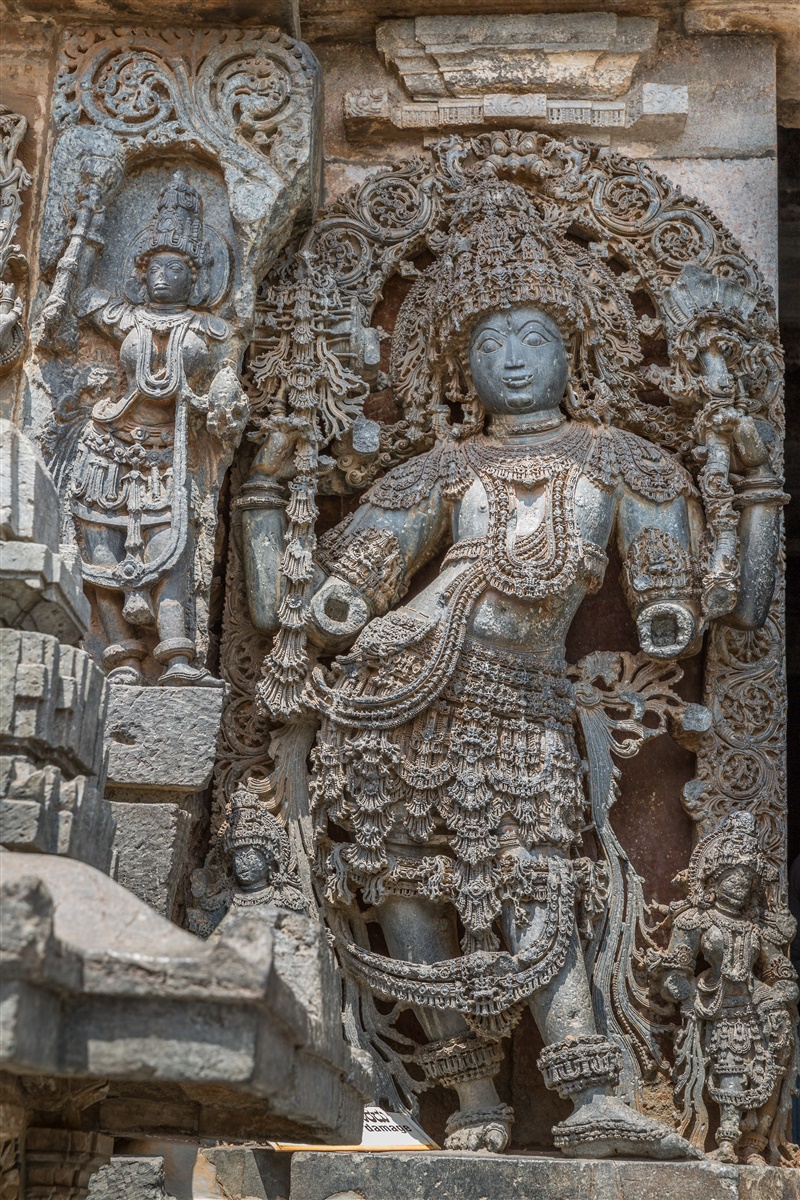 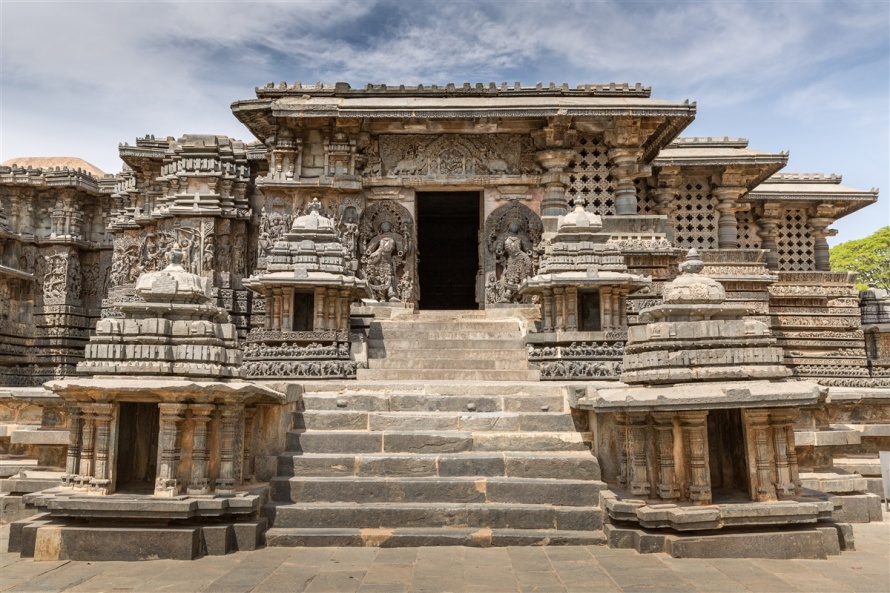 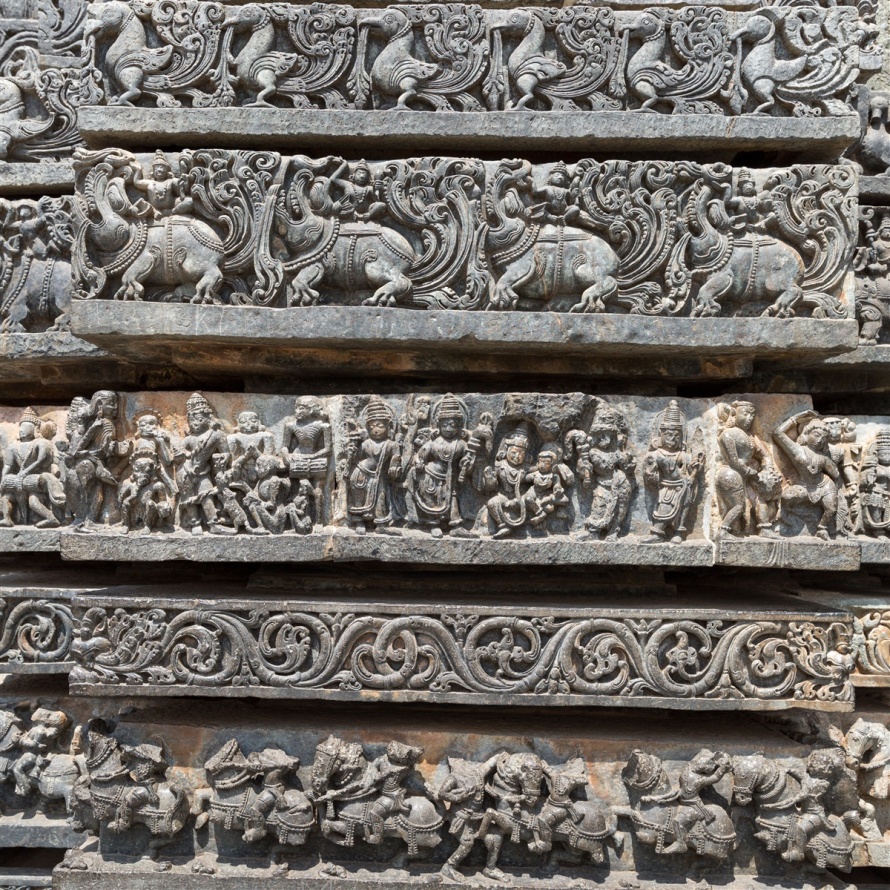 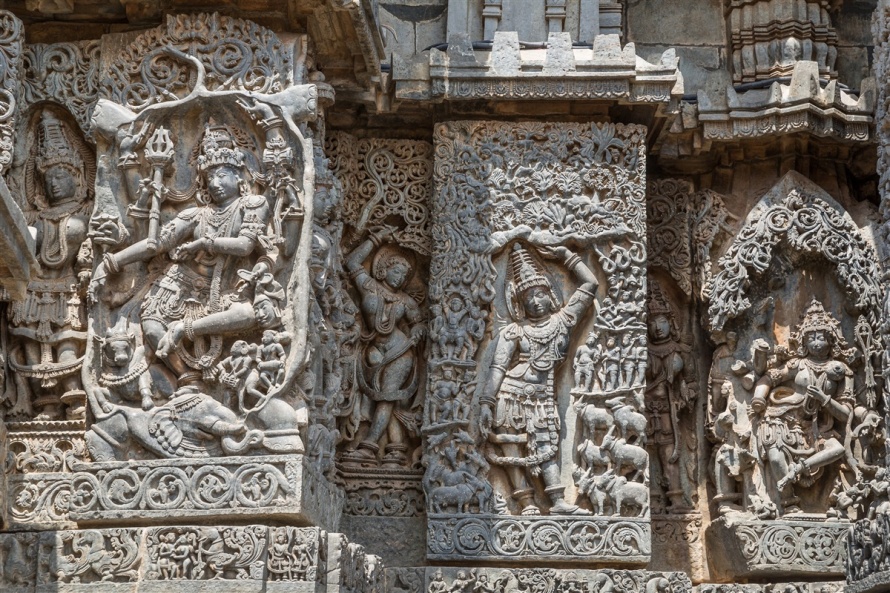 The Hoysaleshvara Temple in Halebid is simply a feast for the eyes. Set aside plenty of time to take it all in, as you will surely spend longer here than you originally anticipated.

In total there are 240 intricate sculptures, along with peripheral carvings that themselves are wonderful. According to the art critic Gerard Foekema, perhaps no other Hoysala temple is as articulate in sculpture as this is and these sculptures are “second to none in all of India”. It’s hard to disagree with that statement…