Lodhi Gardens are a 20th century creation, when a village that surrounded the tombs of the Lodhi and Sayyid dynasties was cleared by the British and its inhabitants relocated. It must be one of the prettiest places in Delhi to walk or have a picnic, with four monuments within the park that can be easily visited in an hour.

The park was first known as Lady Willingdon Gardens, after the wife of the then viceroy, it was renamed Lodhi Gardens in the 1960s.

Most visitors enter Lodhi Gardens from the south via Lodhi Road, a very short walk from Safdarjung’s Tomb. The order of the monuments are described from this entrance, heading north. 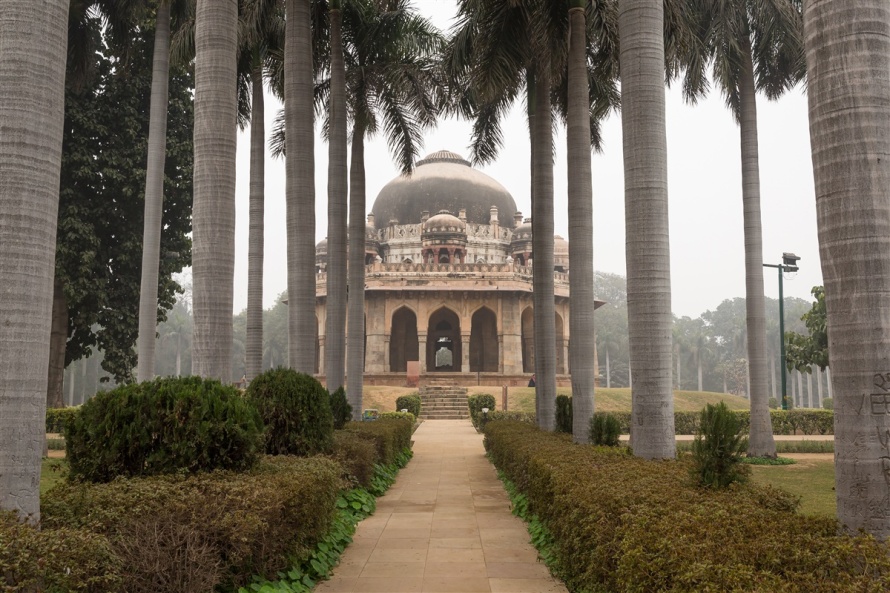 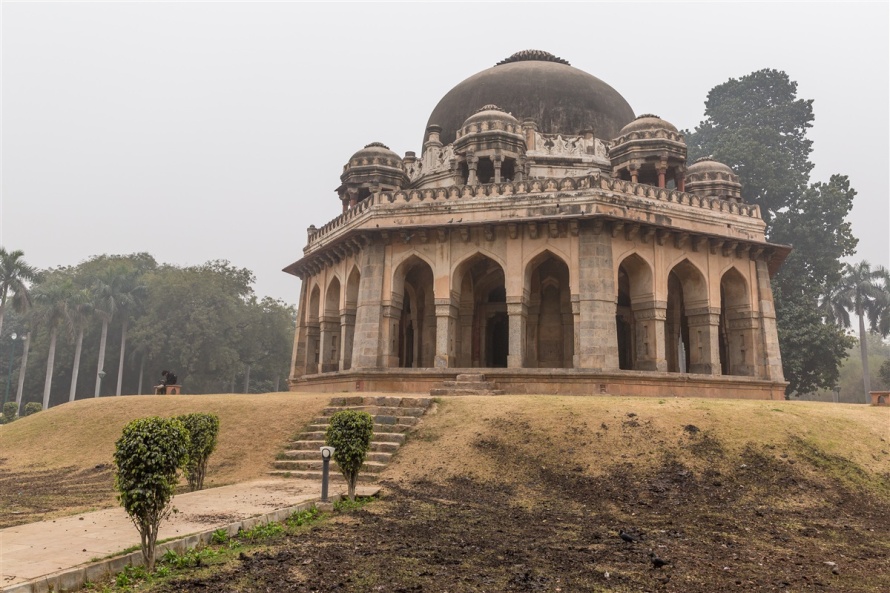 The structure dates back to the mid 15th century, with its array of upper story chattris and turrets making the tomb appear almost circular, and also showing Hindi influences in the architecture. 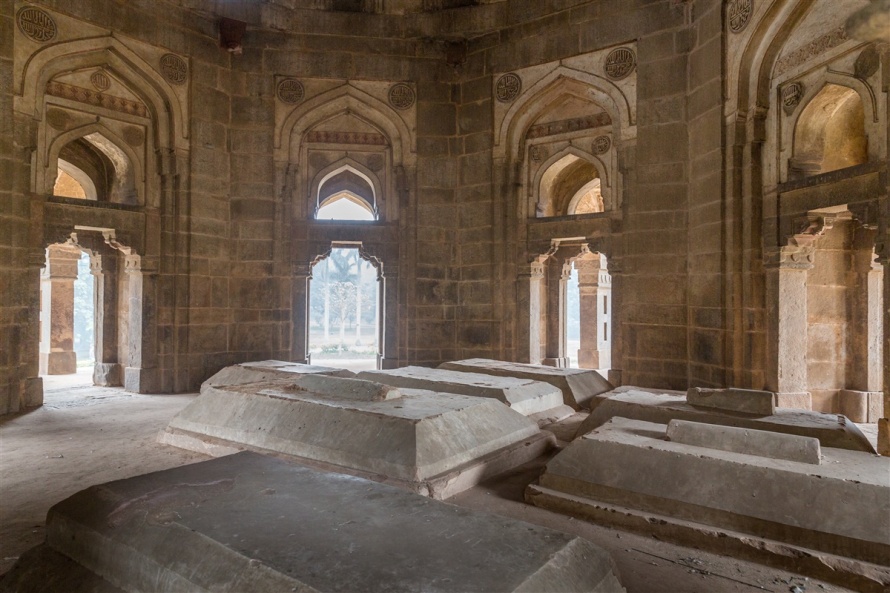 The ceiling is decorated with carved stucco using circular designs with arabesques and calligraphic motifs. 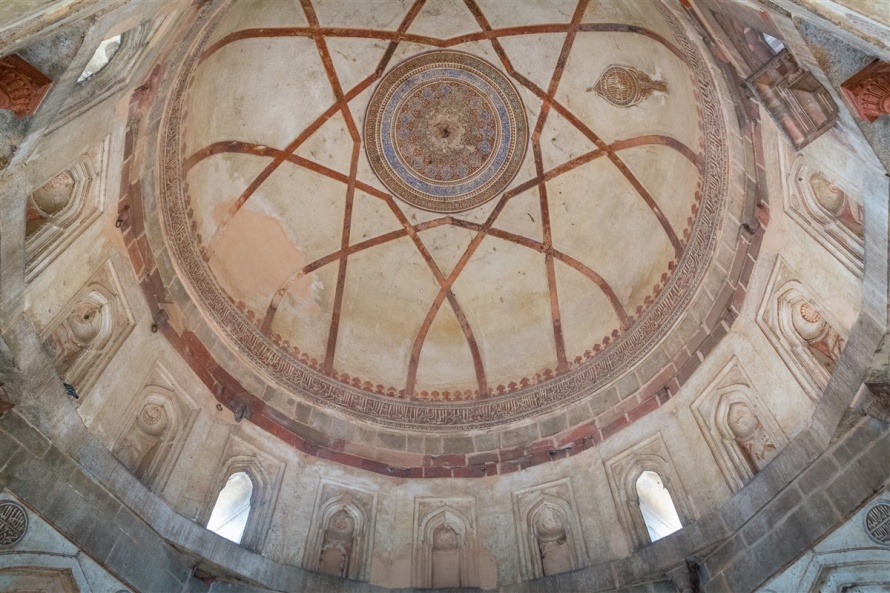 Continue heading north, away from Lodhi Road, and soon you will reach a pretty group of buildings in the center of the gardens; Bara Gumbad and Sheesh Gumbad. Both these monuments are situated in an area formally known as Khairpur village. 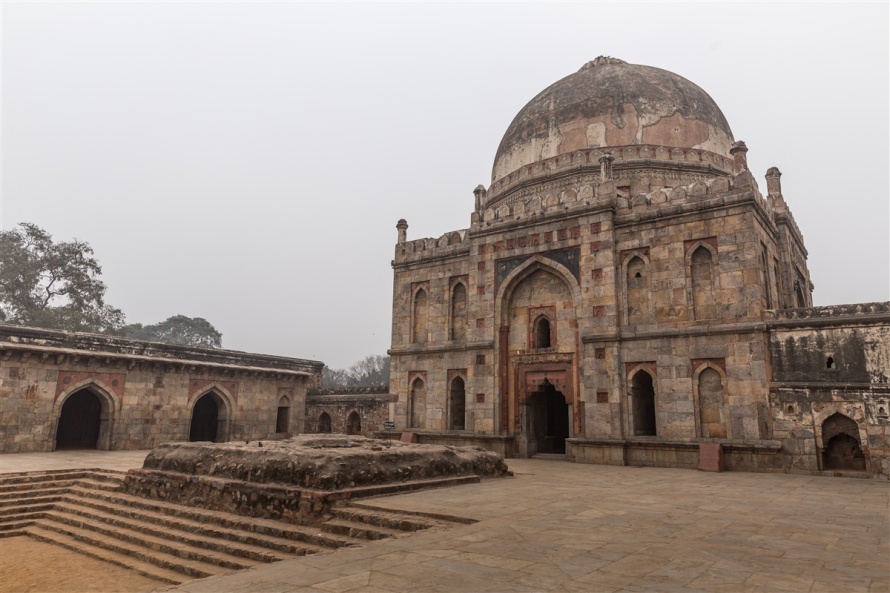 Bara Gumbad (literally “big dome”) was constructed in 1490 A.D, and is believed to have the earliest constructed full dome of any building in Delhi. 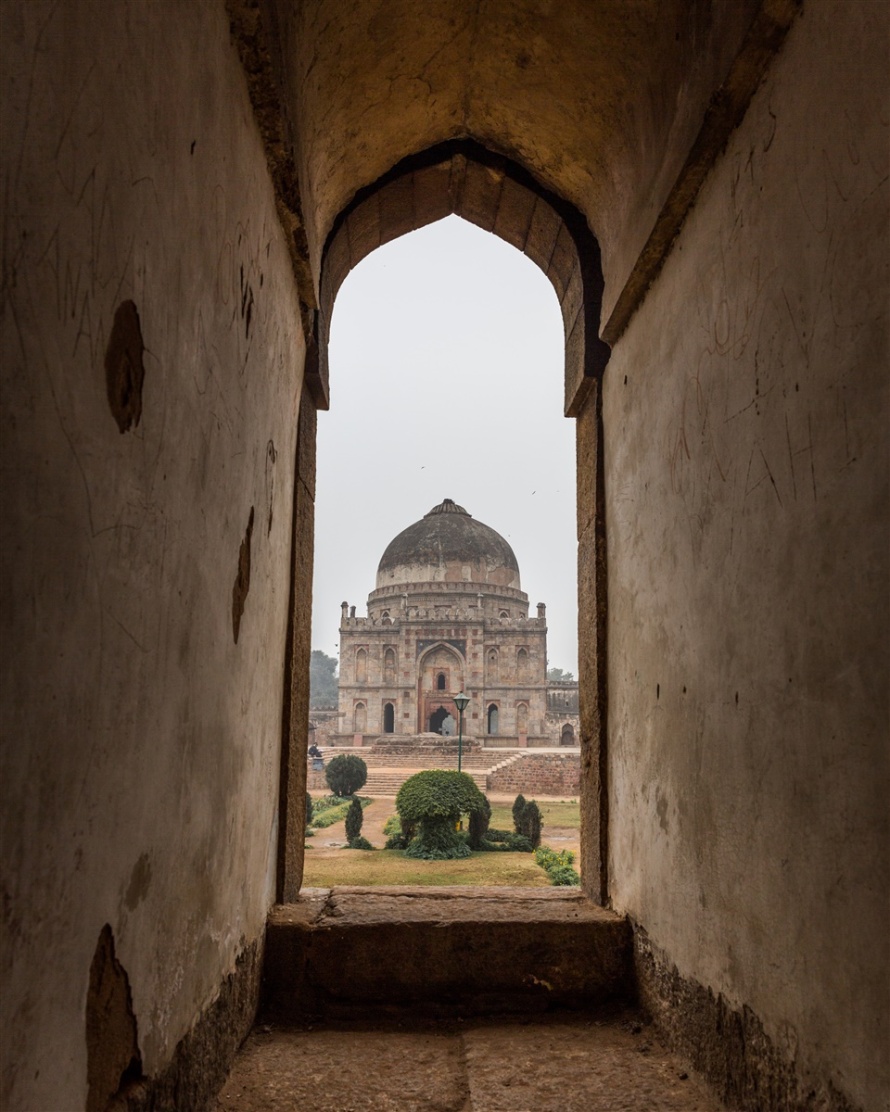 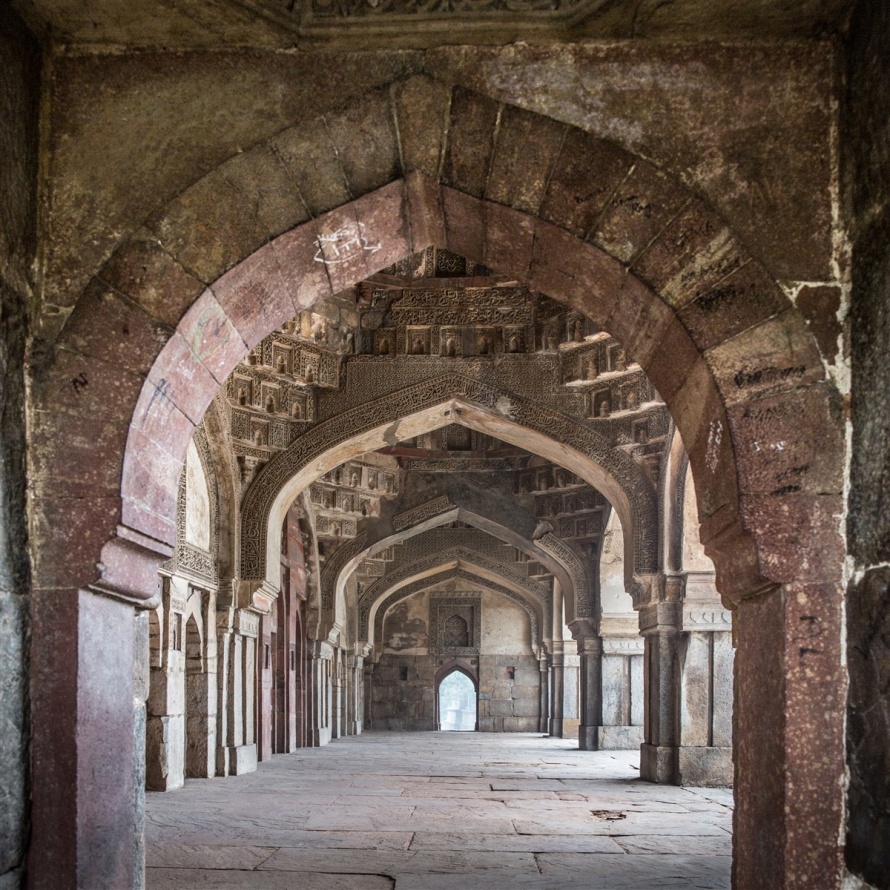 The construction is generally attributed to Sikandar Lodhi, although some historians suggest that it was built by an unidentified noble before being appropriated by Sikander Lodhi in 1494 A.D. to provide a gateway to his mosque. 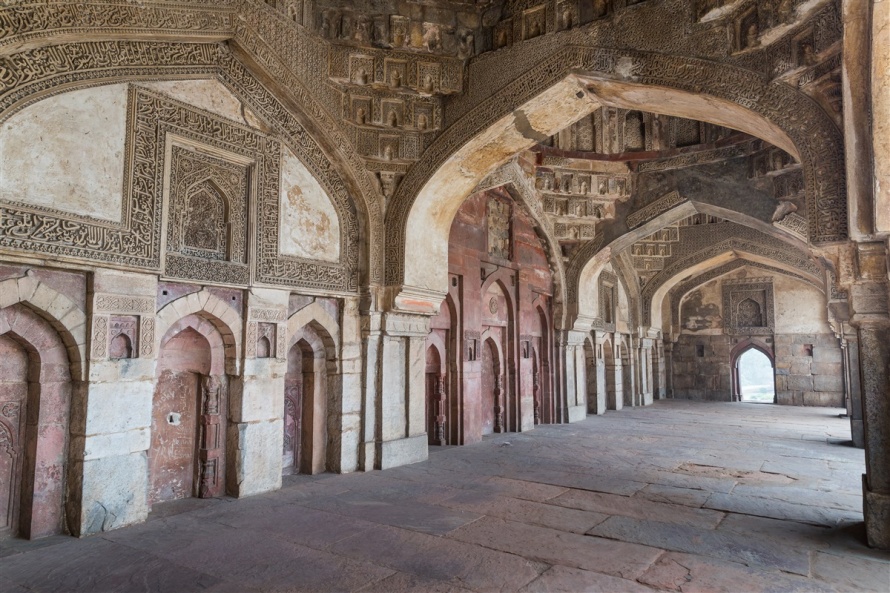 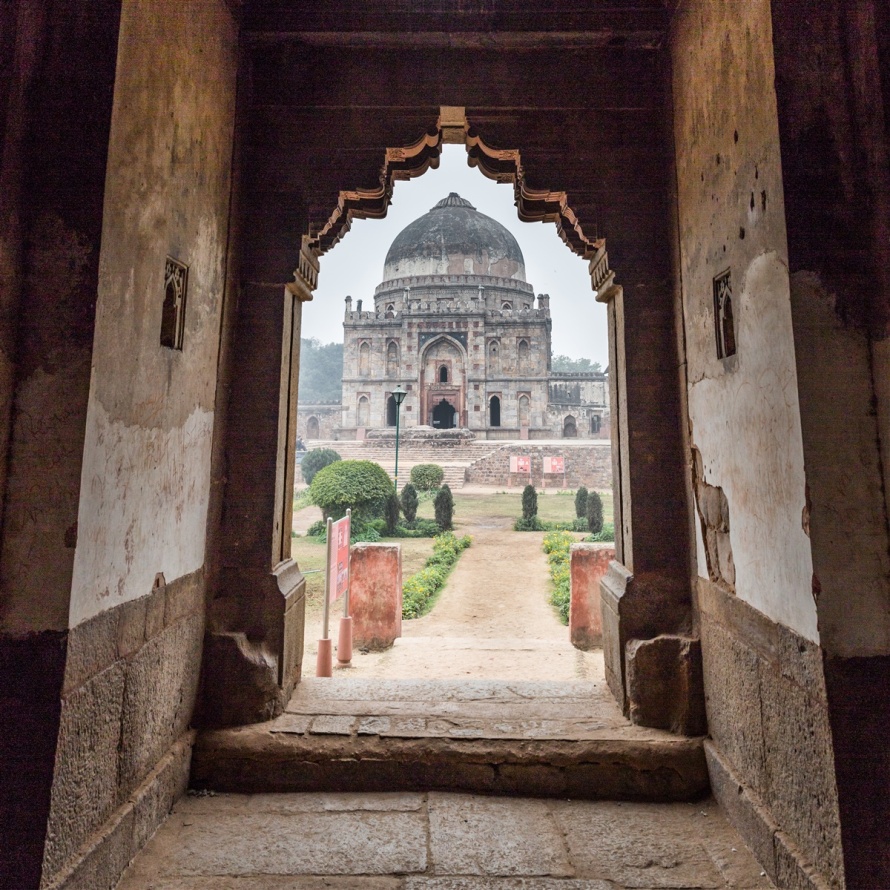 With a lack of cenotaph at the center, the placement of the building and stylistic differences, the true purpose of Bara Gumbad remains a mystery.

A mihrab (prayer niche) in the Friday mosque (Jama Masjid) of the Bara Gumbad gives the date of construction as 900 AH (Anno Hegirae) of the Islamic lunar calendar. 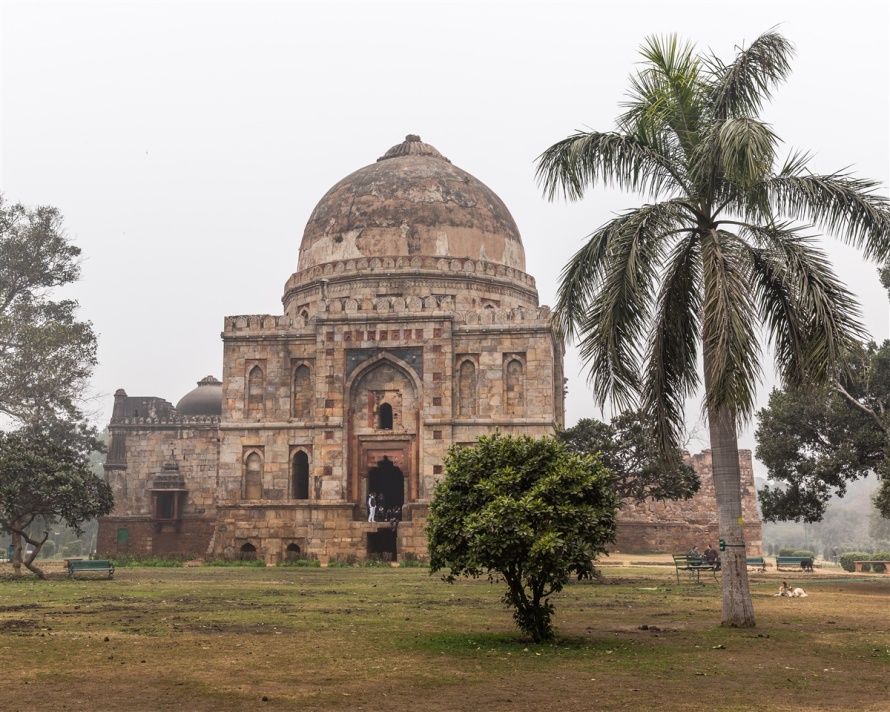 Immediately next to but not aligned with Bara Gumbad, is Shisha Gumbad. 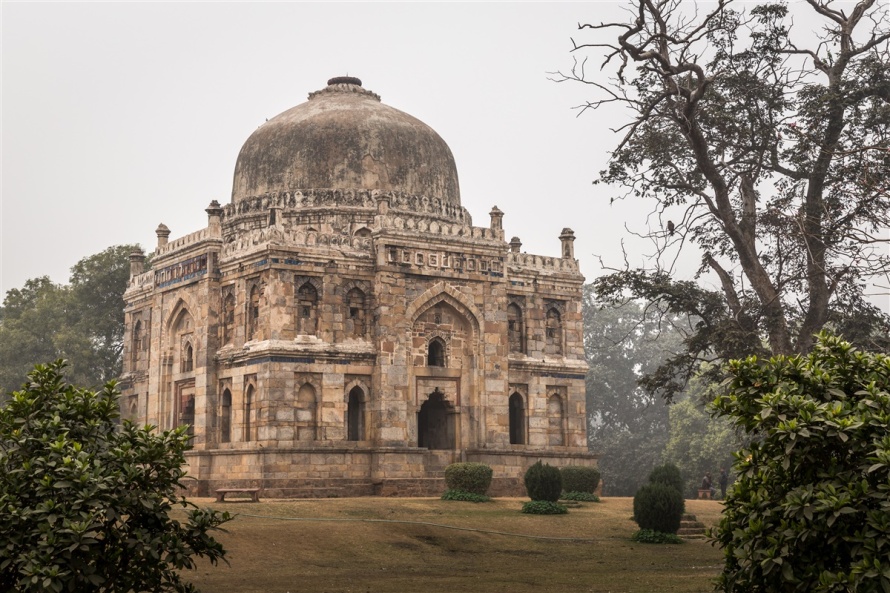 Shisha Gumbad (literally “glass dome”)  is a tomb from the last lineage of the Lodhi Dynasty and is thought to have possibly been constructed between 1489 and 1517 A.D. 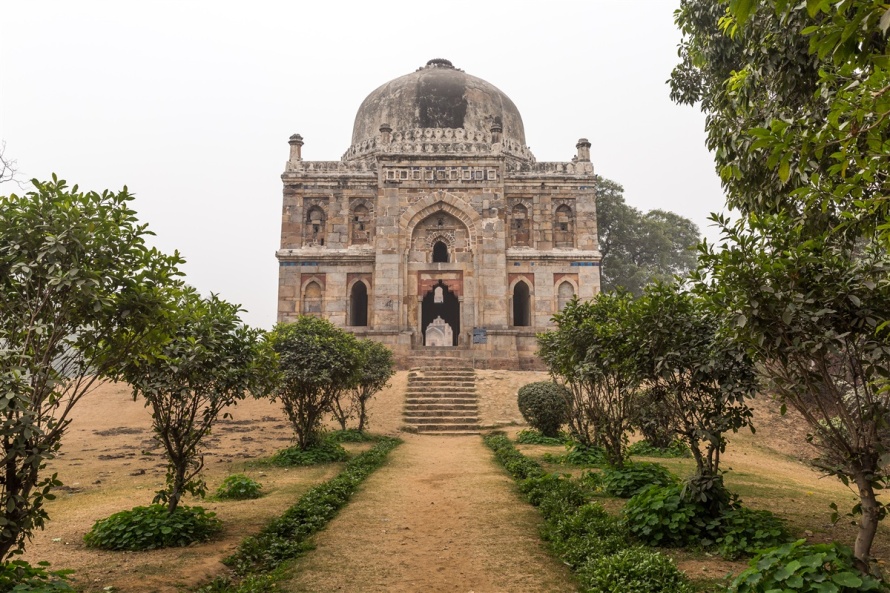 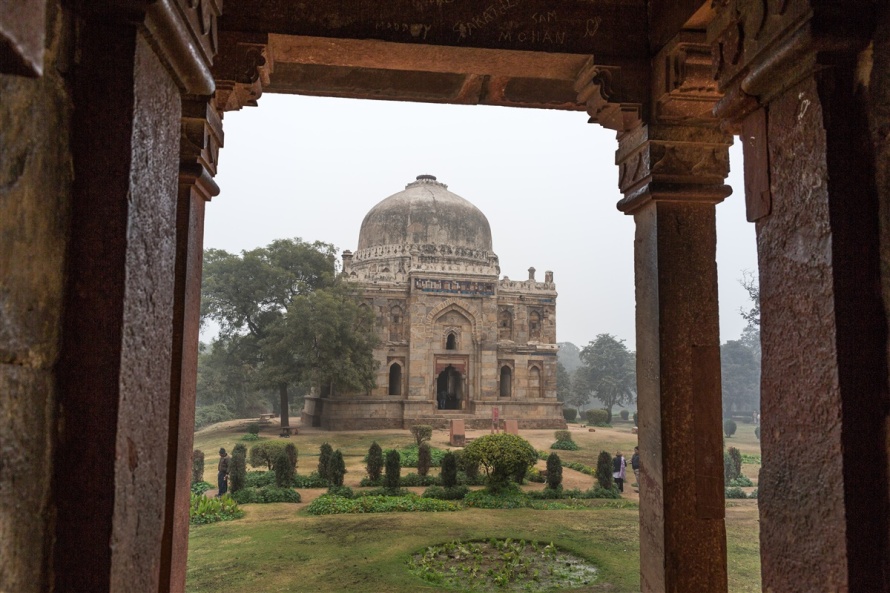 The building houses tombs of an unknown family that may have been a part of the Lodhi family and a part of Sikandar Lodhi’s court. It is however believed by some historians that the tomb is of Bahlul Lodhi (died 12 July 1489), who was chief of the Pashtun Lodhi tribe and founder & Sultan of the Lodhi dynasty of the Delhi Sultanate. 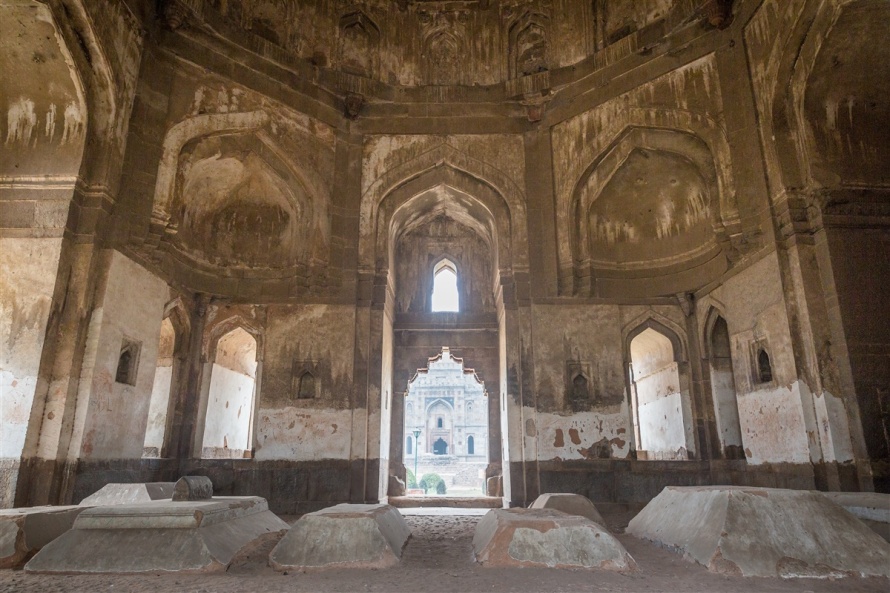 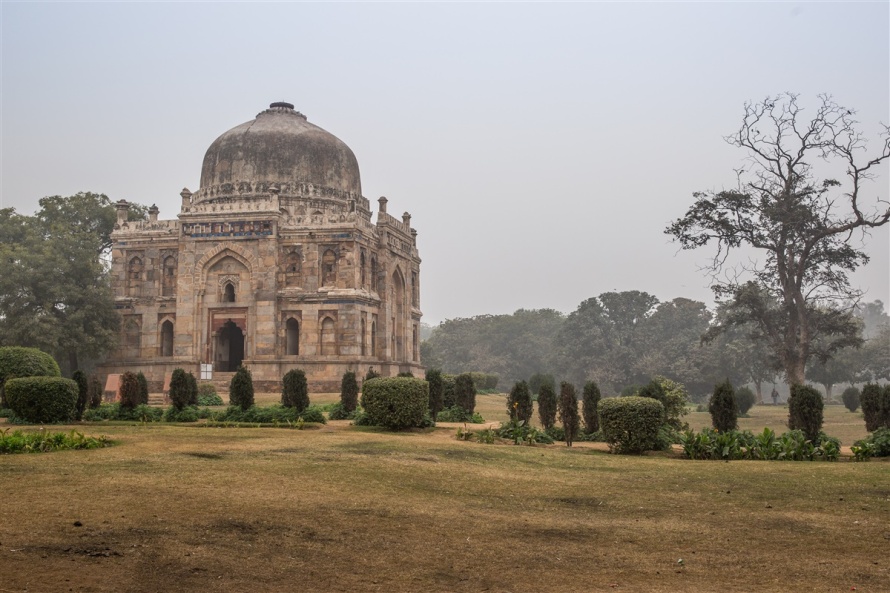 The monument was originally decorated with blue enamelled tiles that shined like glass. The Gumbad hence got its name “Shisha Gumbad”. The blue tile embellishment now only remains on top of the main frontage in traces. 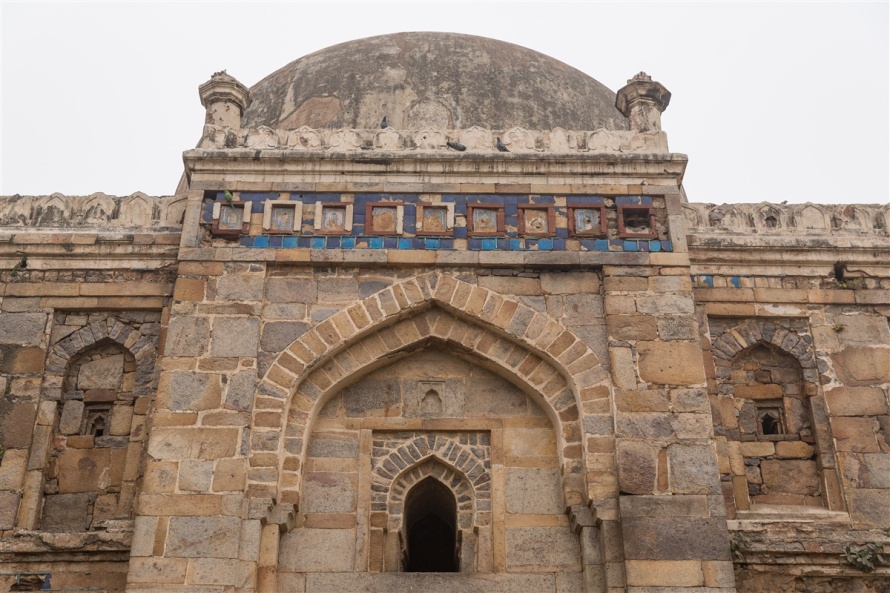 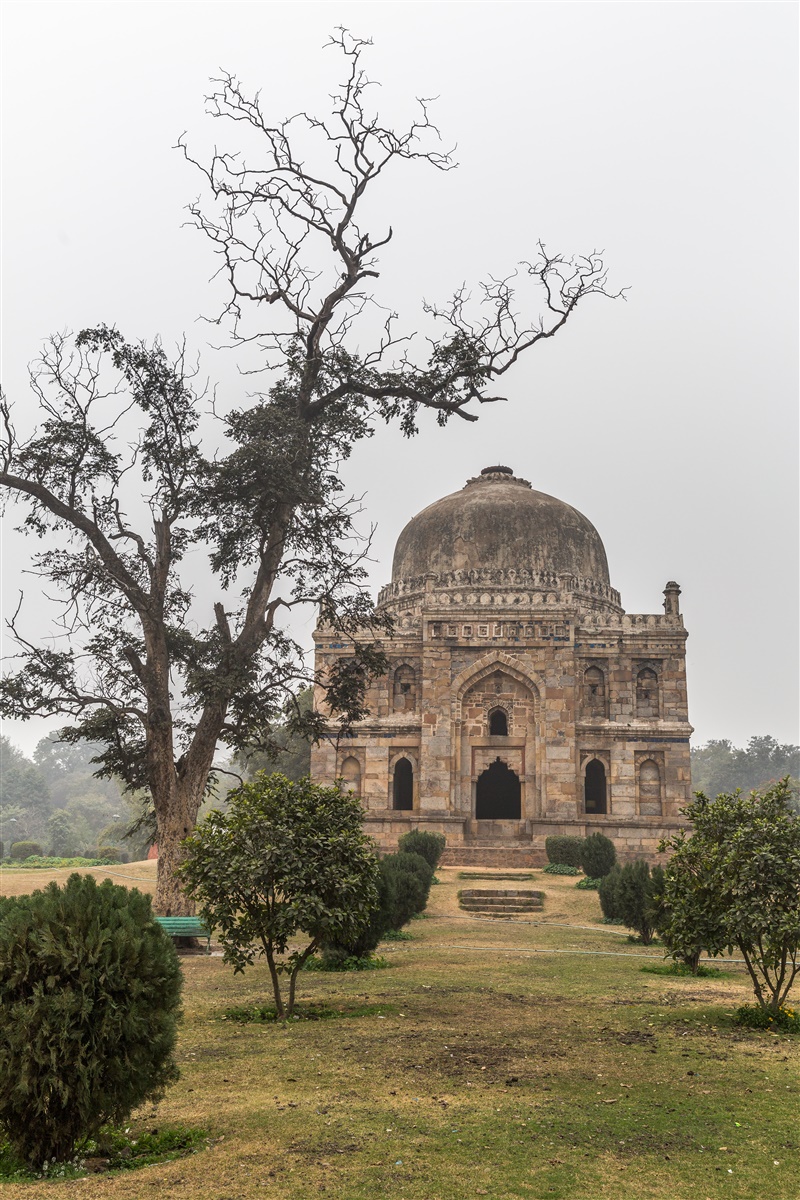 Heading further north towards beyond a lake lies the tomb of Sikander Lodhi. 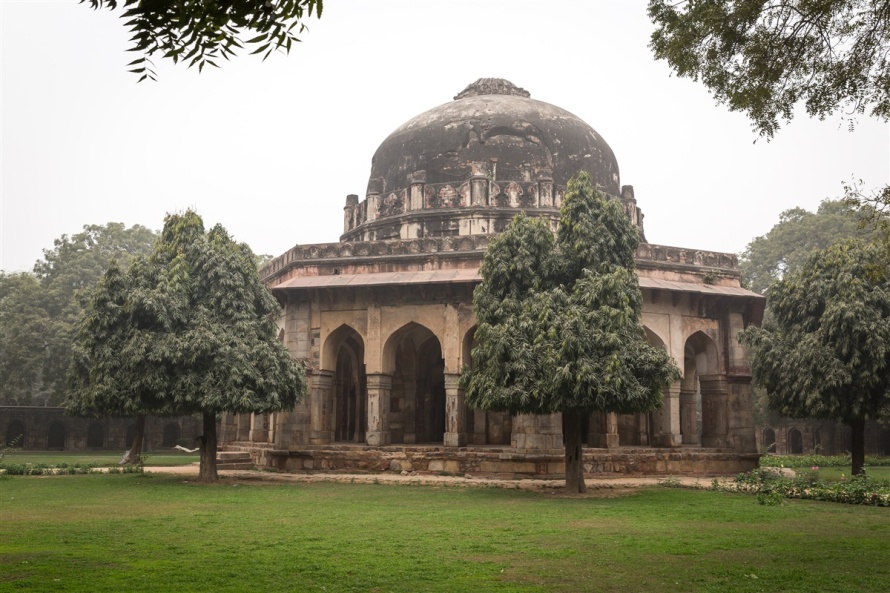 This walled tomb was the last major Lodhi building to be constructed in Delhi,  and is believed to have been inspired in part by the tomb of Muhammad Shah. 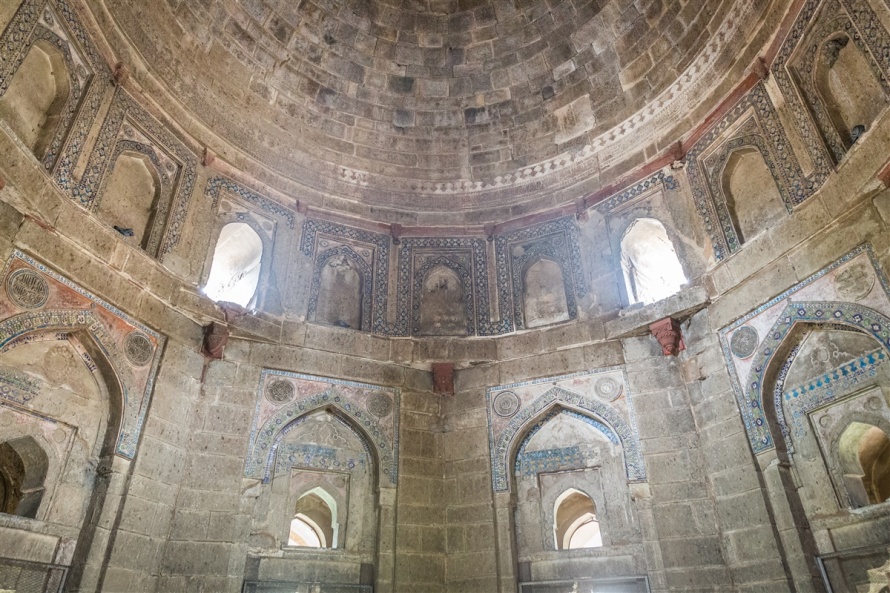 The highlight of a visit to this tomb has to be the interior, which has been decorated with enameled tiles of various colors. 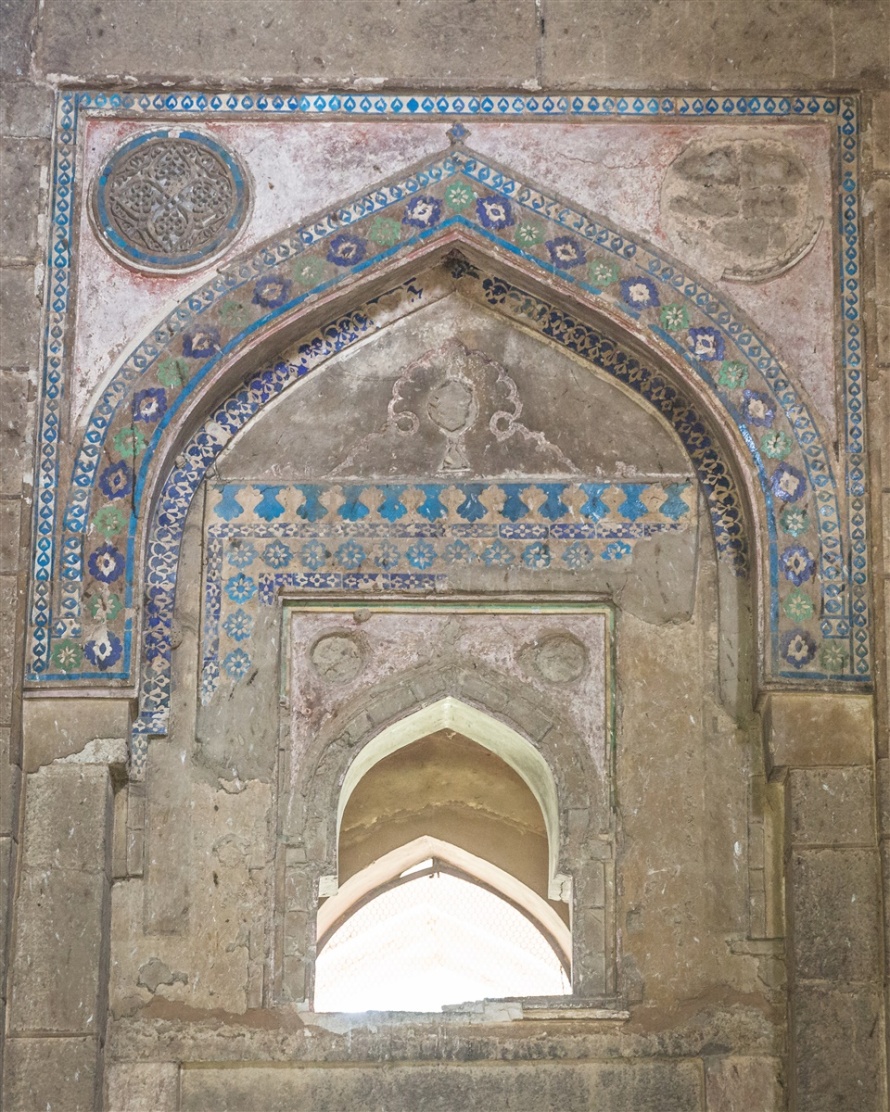 My visit to Lodhi Gardens was on a chilly, foggy, and smog ridden January morning – not ideal conditions for photography. But it’s a wonderful place to visit at any time, a welcome contrast from the busy streets of Delhi, and the setting for the monuments is just perfect.

The gardens are conveniently located close to Safdarjung’s Tomb, as you head along the Lodhi Road towards Humayun’s Tomb. If you don’t mind the exercise, all three sites can be easily visited in a day on foot.