If I told you I had just visited the Taj Mahal that was built by Shah Jahan whilst I was staying in Bhopal, you could quite rightly claim I’ve perhaps had a couple of Kingfishers too many. But I did exactly that, although this monument was built by his namesake Shah Jahan, she was the begum of Bhopal in the late 19th century. 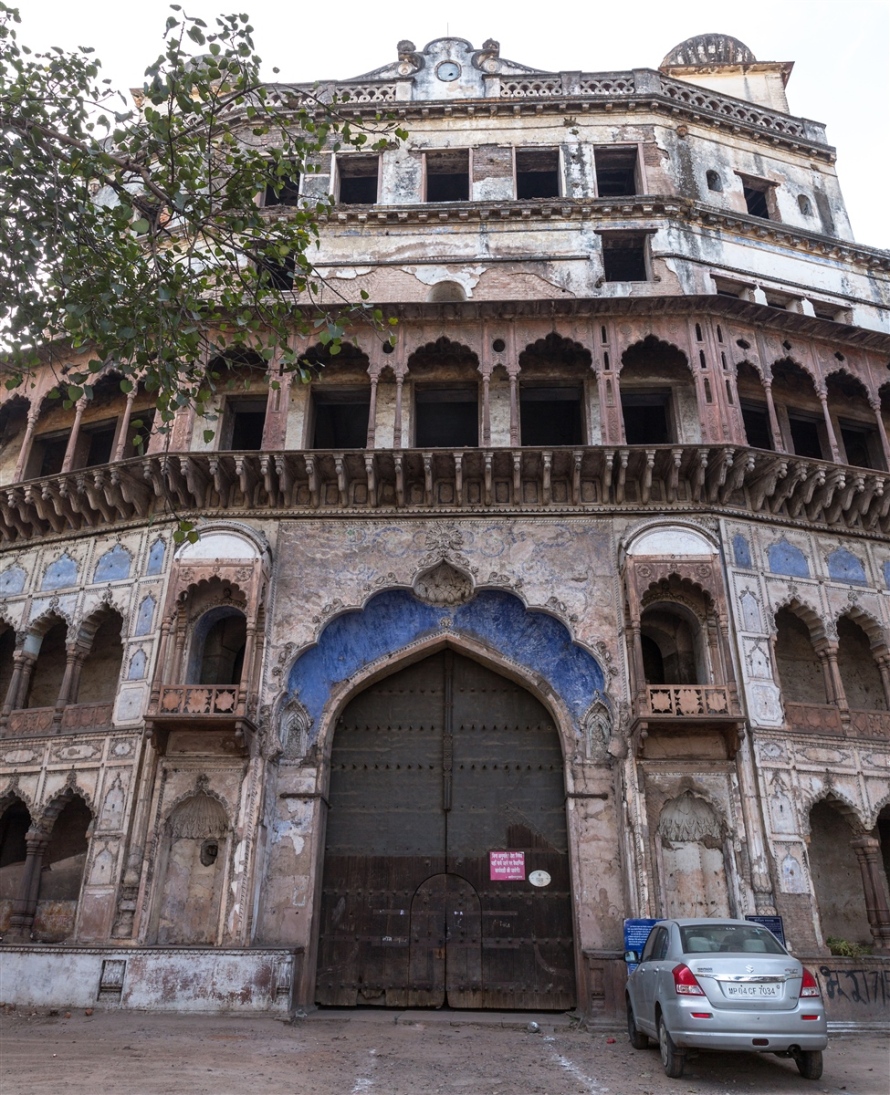 And unlike the Taj Mahal in Agra, it’s namesake in Bhopal is now a complete ruin and not really on the tourist map at all. I arrived outside the main entrance, which was firmly shut, and banged repeatedly on the old wooden door for a couple of minutes. Even the facade of this palace gives little clue as to what lies within, with crumbling masonry, faded colours and the plaster almost falling from the walls as my door banging exploits continued.

Eventually a guard opened the door, somewhat in a daze (I may have woken him up), and offered to show me around…

Originally called Raj Bhavan, but renamed Taj Mahal on the suggestion of the British, this palace was commissioned in 1871 by the 11th ruler of Bhopal and took 13 years to complete at a reputed cost of ₹ 3,000,000. The palace has 120 rooms in total, a sheesh mahal and an elaborate fountain structure called “savan bhadon” that simulated the effect of rain. The palace’s architecture is a unique combination of British, French, Mughal, Arabic and Hindu influences. 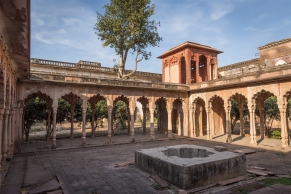 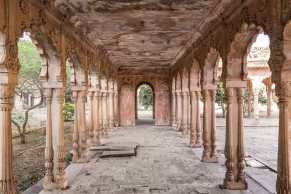 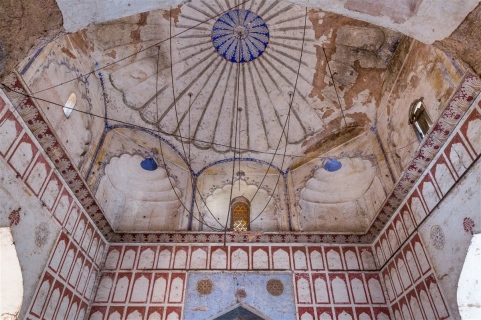 Amazingly this was one of the largest palaces ever built at the time, and was part of a complex of monuments together with the Benazir Palace (the begum’s summer residence) and the Taj-ul-Masajid (one of the largest mosques in Asia), along with three surrounding lakes. The wind blowing from the lakes helped keep the palace cool. 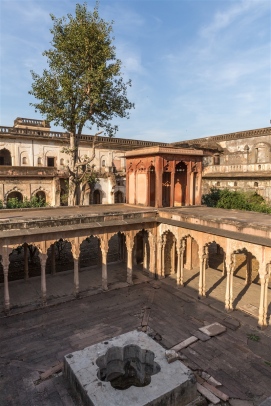 After Partition in 1947, Nawab Hamidullah Khan allowed several Sindhi refugees to live in the palace. Many stayed there for around four years before shifting to Bairagarh, with the last of the refugees moving out in the 1980s.

Some members of the royal family of Bhopal also remained in the palace, but gradually they all moved away without the necessary finances for repairs to the building. By 2008 large parts of the palace had completely collapsed. 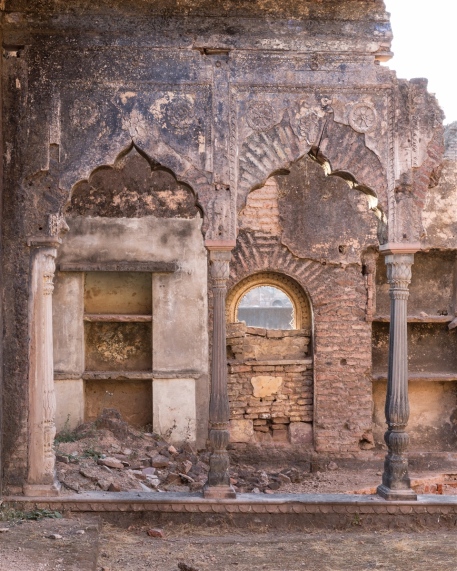 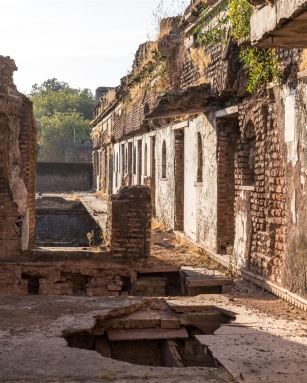 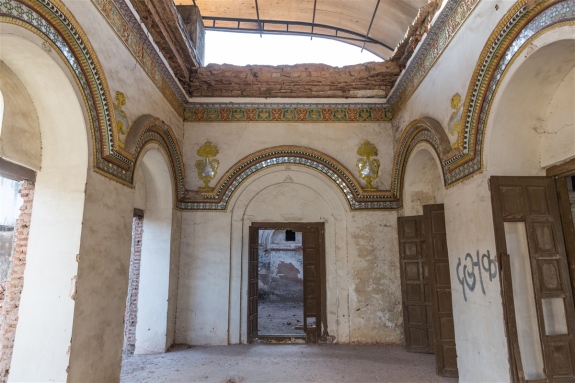 So what you see today is the accumulation of 70 years of neglect, except for a brief period when the state archaeology department carried out some restoration after taking it over in 2005. Since then, even the restored areas have become undone, you can’t see specifically where those efforts have taken place at all. The state archaeology department now says it has no funds for any further restoration, and is unlikely to generate them in the future. 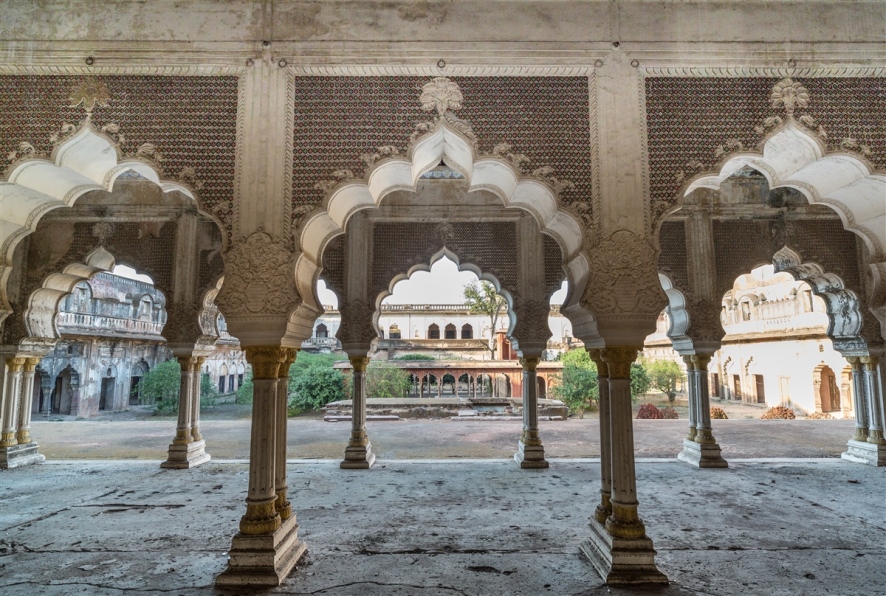 However, despite all this doom and gloom, the future may be looking brighter for the Taj Mahal Palace in Bhopal. There are new plans being drawn up to save this monument from the brink. 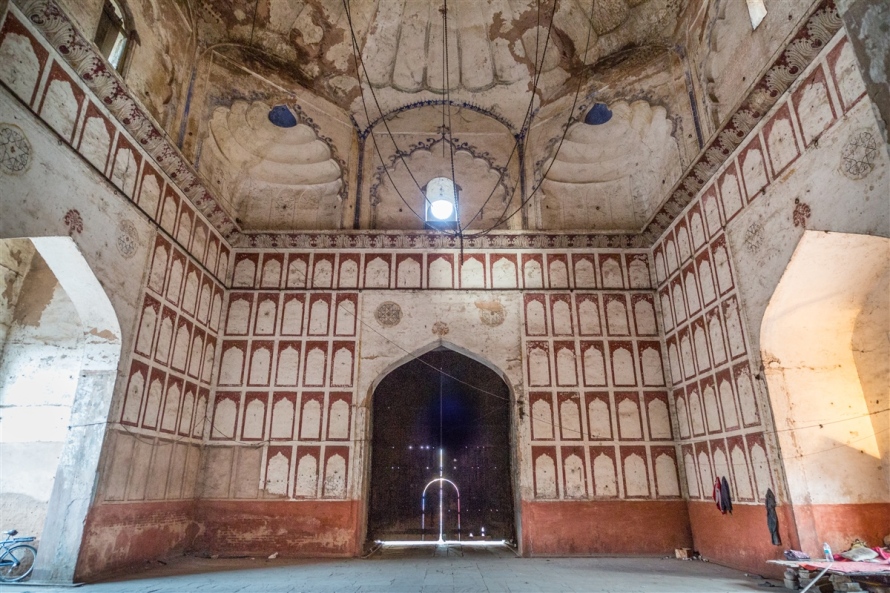 In 2017 a private builder from Indore has stepped forward with proposals to develop the palace into a heritage hotel. I was led into a small office where mockup pictures of the renovated palace and site plans were available to see.

Of course these artists impressions of how the heritage hotel will look is a little distant from how the palace was at its zenith, but I guess this is the compromise you have to face. The alternative is quite likely to be almost no palace remaining if another 70 years passes with continued neglect. 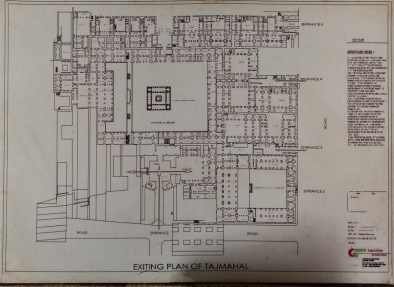 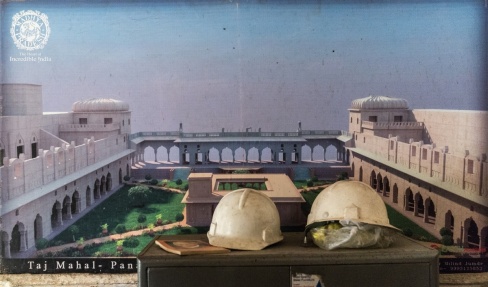 It does of course also pose a challenge for the palace’s relationship with the locals of Bhopal, it is their heritage afterall. In becoming a heritage hotel the palace will become the refuge of the wealthy, no doubt with a hefty entrance fee or any casual observers. But then what we have today is essentially a closed building, falling down, and with little interest from the public. So perhaps this new lease of life for the Taj Mahal Palace in Bhopal is the best outcome we can hope for.