For over a decade I have wanted to visit the monuments at Sanchi, and finally in 2018 I fulfilled that ambition. Sanchi is unique in having the most perfect and well preserved stupas anywhere in India, with monuments spanning from the 3rd century B.C. to the 12th century A.D.

Being both an archaeologist and photographer, a site like Sanchi poses some problems for me when it comes to documenting my visit. Having spent over 5 hours at the site yielding more than 600 photographs, I have decided to break down my account into a number of blog posts :

Very few visitors to Sanchi explore far beyond Stupa 1, Stupa 2, and Stupa 3, in fact I was surprised how many just limited themselves to Stupa 1 alone !

In total there are 50 monuments within the Sanchi complex, each structure regardless of its form was numbered from 1 to 50 by Sir John Marshall, the Director General of Archaeology in India, who spent eight years cataloging and restoring the site between 1912 and 1919. 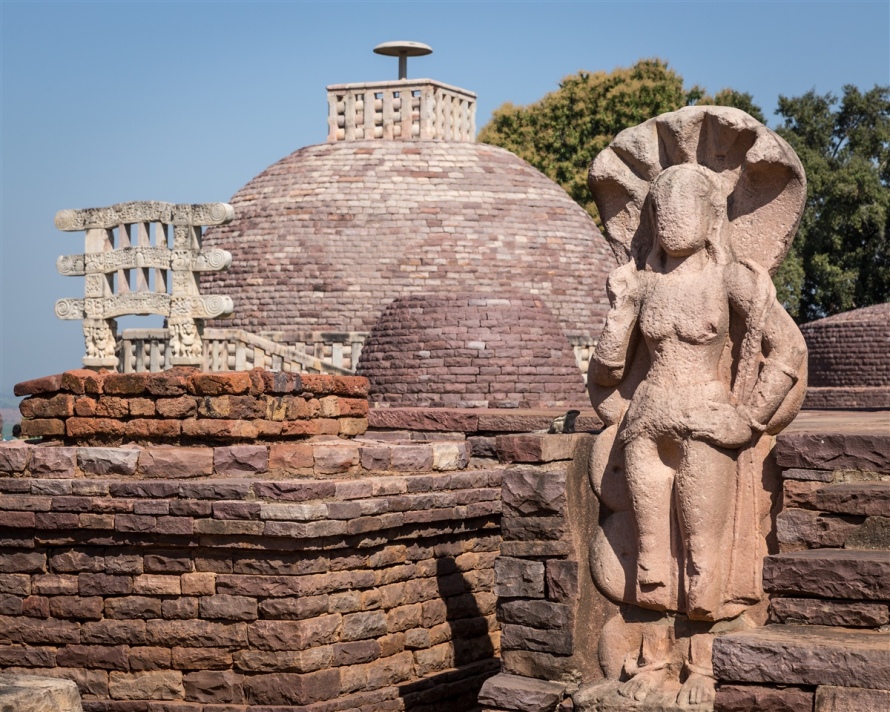 The remaining monuments at Sanchi can be divided into four distinct areas of the site; those residing on the main terrace along with Stupa 1 and Stupa 3, the structures on the raised eastern area, the monuments in the southern area, and those on the western slope leading down to Stupa 2.

This is not a full account of all the remaining structures to be seen at Sanchi. Unfortunately my time here after 5 hours was running short, so this is really just the edited highlights and what happened to draw my eye at the time.

There are the remains of a large number of other stupas on the main terrace almost completely surrounding Stupa 1.

Stupa 5 along with other smaller supas

These range in size, the largest and most complete being Stupa 7, but some only have their plinth today. Many of these stupas have been dated from the 6th to 8th century A.D.

Located by the Southern Gateway of Stupa 1 and originally over 42 feet in height, this is the oldest of the pillars to be found at Sanchi. Unfortunately it has been through the wars a bit, with only the lower part now remaining in-situ. Other broken sections of the column reside nearby with a roof protecting them.

In the mid 19th century parts of this pillar were found being used as a sugar cane press, clearly the highly polished sandstone so typical of Ashoka pillars was just too tempting for some of the locals.

The sandstone used for this pillar came from quarries several hundred miles away. The damaged inscription at the base records Ashoka’s threat to excommunicate from the Buddhist church any monk or nun attempting to create divisions within the community. The magnificent capital with lions can now be found in the site museum (frustratingly closed on Fridays, the day I visited !) 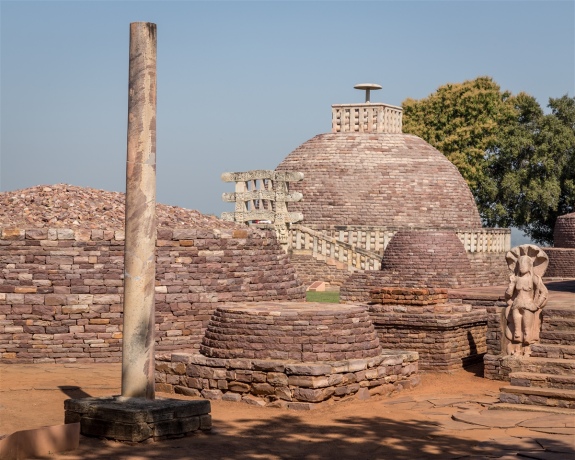 Dating from around the 5th century A.D, this is what appears to be a poor imitation of Ashoka’s pillar.

Known as the Vajrapani pillar and located near to the North Gateway of Stupa 1, only the stump remains alongside the broken off capital.

Dated to the 5th century A.D, a statue found alongside the broken column was of a man clad in a dhoti and adorned with earrings, bracelets, a jeweled necklace and headdress. This is believed to be a representation of Vajrapani, backed up by an inscription found nearby that refers to a “Vajrapani Pillar”.

Attributed to the Gupta period, this temple is noted for it’s fine proportions, with lions and bears on the capitals.

The temple no longer has an idol, although in the mid 18th century it is recorded that a broken image of Buddha once resided here.

Excavations here revealed that this temple is built on the foundations of a much earlier Maurya or Sunga period hall. This 7th century temple was apsidal, with twelve pillars of which nine now survive. In plan it very closely resembles rock-cut chaitya halls that you can visit in many parts of western India such as Karla, Kondana, Lenyadri, Bedse, Bhaja, Ellora and Ajanta Caves. The difference here is that the apse is encompassed by a solid masonry wall rather than pillars. 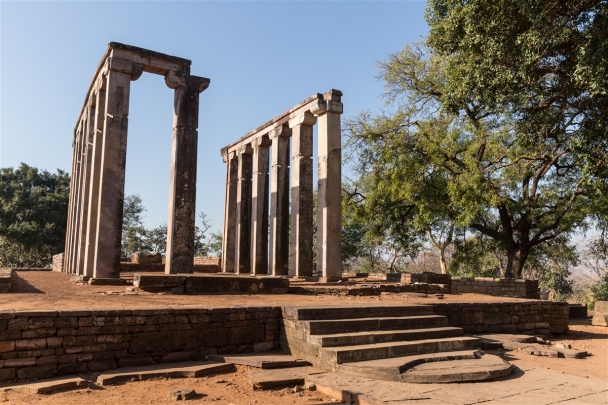 Many terracotta leaf-shaped votive tablets stamped with the image of Buddha were found on the floor on the eastern side of the apse, the motifs suggesting a date of 7th or 8th century A.D.

Around the 11th century A.D. the floor was raised and richly carved door jambs were added. Any remains of what was likely to be a massive stupa inside have long since completely disappeared.

A curious structure, with three small chambers fronted by an antechamber, and an underground cell. 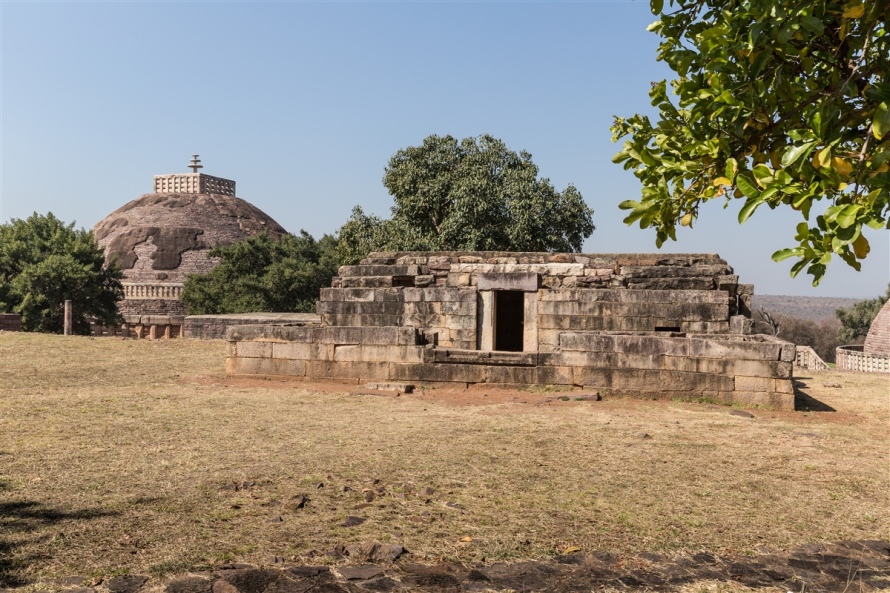 None of the chambers have doors, so access is only possible through the windows ! I’ve failed to find any record as to the purpose of this structure, perhaps it was used for storage of some nature by one of the monasteries nearby. 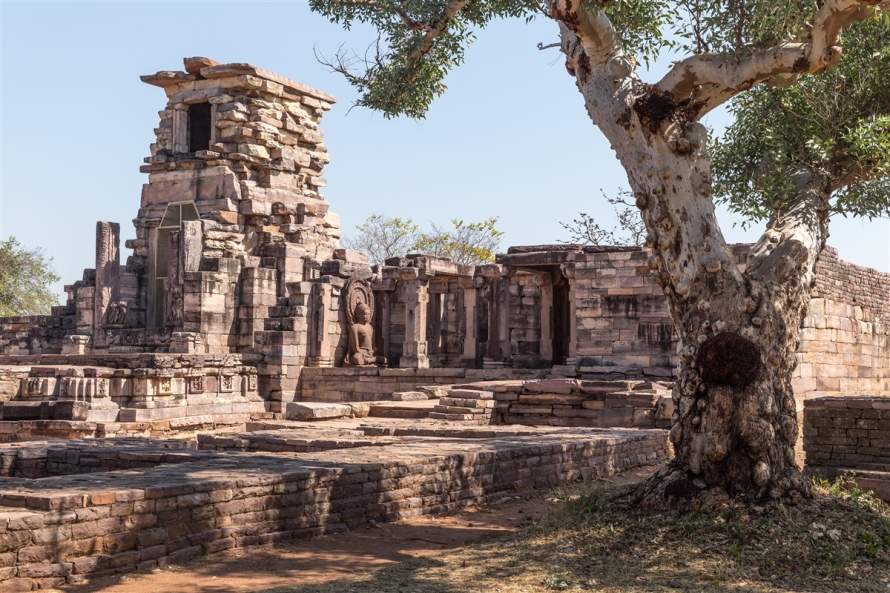 Located at the furthest extent of the Eastern Area, Temple and Monastery 45 now lies mostly in ruins with an abundance of carved masonry scattered all about. 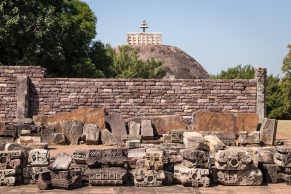 The later temple you can see today, possibly the last Buddhist temple to be built at Sanchi, has a square sanctum with a hollow spire and a very narrow antichamber. Images of the Parsva-devatas set in the east and south niches still remain.

The door jambs are richly decorated with numerous human, animal and floral motifs. The figures of Yamuna and Ganga are especially interesting as these are Brahmanical motifs, which suggests by this period they had been adopted by Buddhists.

Visually the highlight in this area has to be the image of Buddha located in a verandah just south of Temple 45, it’s easily missed so be sure you seek it out. 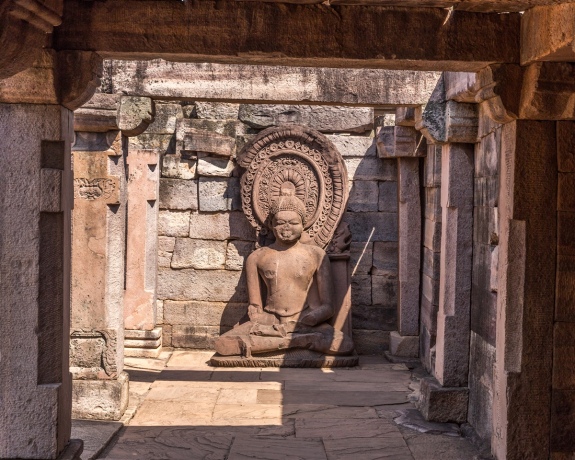 A somewhat confusing monument to make sense of on the ground, primarily because the remains here account for up to three different periods of construction.

The earliest building is mostly likely to be contemporary with the first phase Stupa 1, and consisted of an apsidal hall largely made from timber. This structure burnt down at some point during the 2nd century B.C. and the stone platform was reused as a base for a pillard hall, this time constructed from stone. Most of the remains you can see today are from that building, with five rows of ten pillars still in-situ although all now broken. 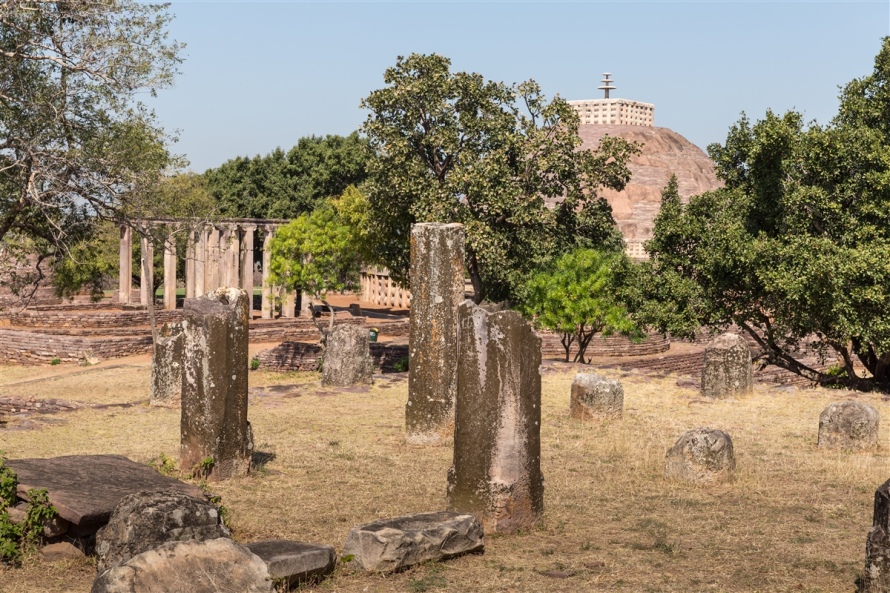 Donar inscriptions found on some of the excavated pillar fragments suggest a date of the 2nd century B.C. for the hall. Much later, in the 7th or 8th century A.D, a small shrine was added on the eastern side of the hall, and more pillars were incorporated into the structure. 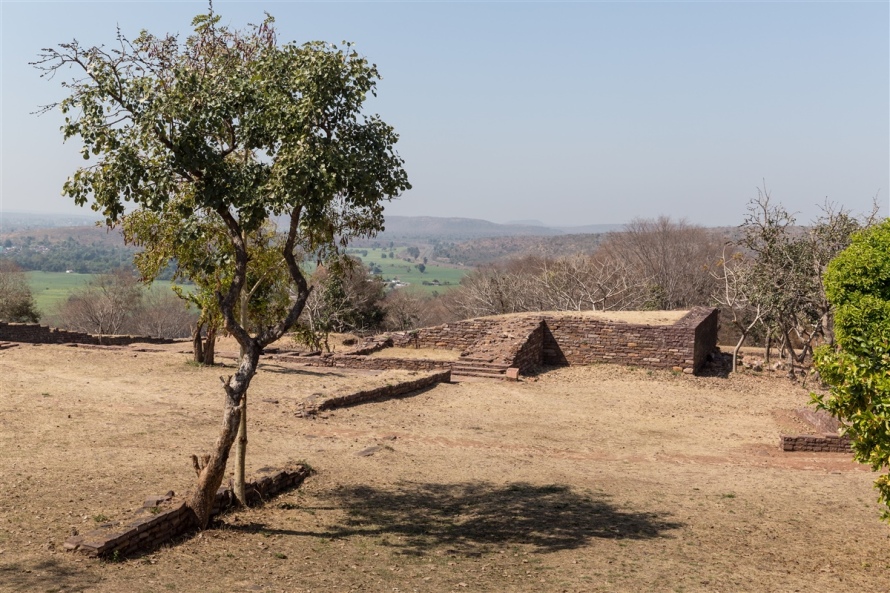 Not much remains of this structure now. Believed to have been built during the Sunga period, all that remains today is a raised square plinth with a stairway of which only the first few steps now remain. The exact purpose of this building remains a mystery.

A modern flight of steps opposite the West Gateway of Stupa 1 leads you down to a plateau with the impressive foundations of Monastery 51 laid out in plan in front of you. This was is an incredibly well built structure, with thick walls all extensively veneered with flat bricks.

There are 22 small cells in total. Excavations here have once again revealed a significant deposit of charcoal, suggesting that at one time wood was perhaps the primary building material on this site. To the south east of Monastery 45 is a tank, this was in fact originally a quarry. 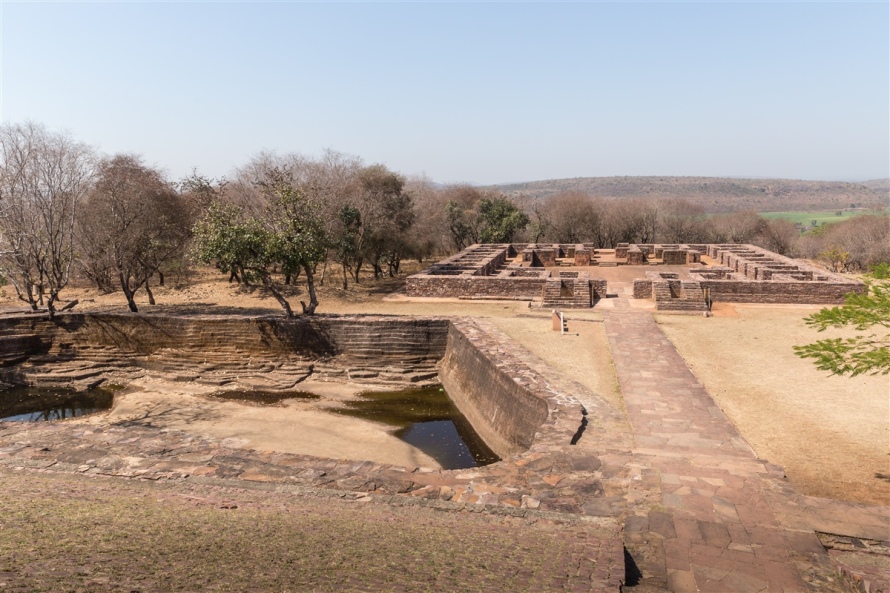 At the far side of Monastery 45 is a curious large boulder that has clearly been extensively worked. It appears to be a giant bowl, its exact purpose I don’t think has been determined although some believe it to be for the collection of food for the monks. 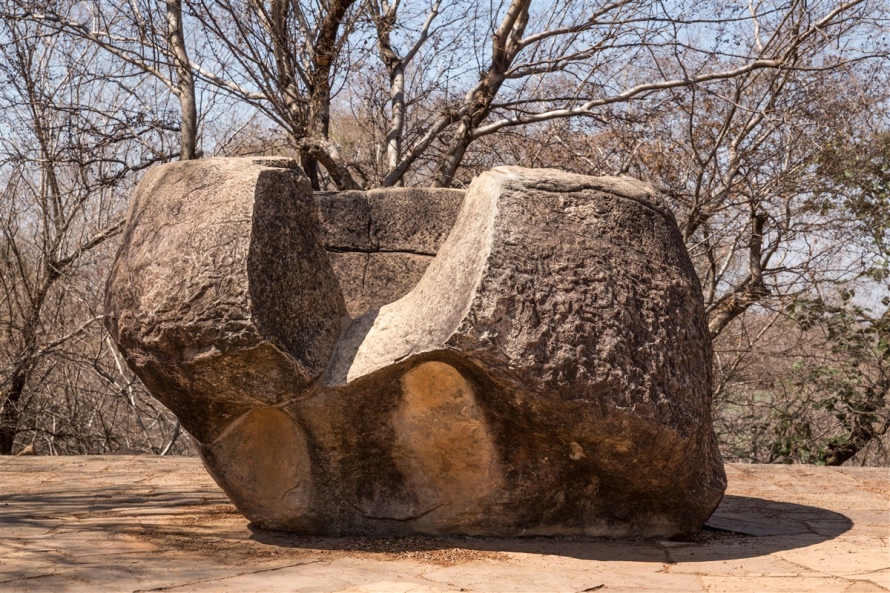 From the far side of Monastery 51 on the western slope it’s only a couple of minutes further to reach the much less visited Stupa 2 at Sanchi. A pathway close to the stone bowl leads further down the hillside, and it’s well worth making the effort to see this monument if time permits.