Mahabalipuram (also known as Mamallapuram) takes its name from Mamalla (650 – 668 A.D.), one of the Pallava kings of Kanchipuram. Its seaside location suggests it may have served as a port, and the rock-cut and monolithic temples in and around the town are the earliest examples of monumental architecture in Tamil Nadu.

There are four primary locations worthy of exploration :

The cave temples and carved panels (which I have called the “Central Monuments”) date from the 7th and early 8th century A.D, and are cut into the rocky sides of a granite outcrop running parallel to the ocean, just 400m from the shoreline.

The ideal time to visit this cluster of monuments is in the early morning, with the acute angle of sunlight enhancing the relief of the carvings, and in some instances adding additional light into the more spectacular temples that face east. 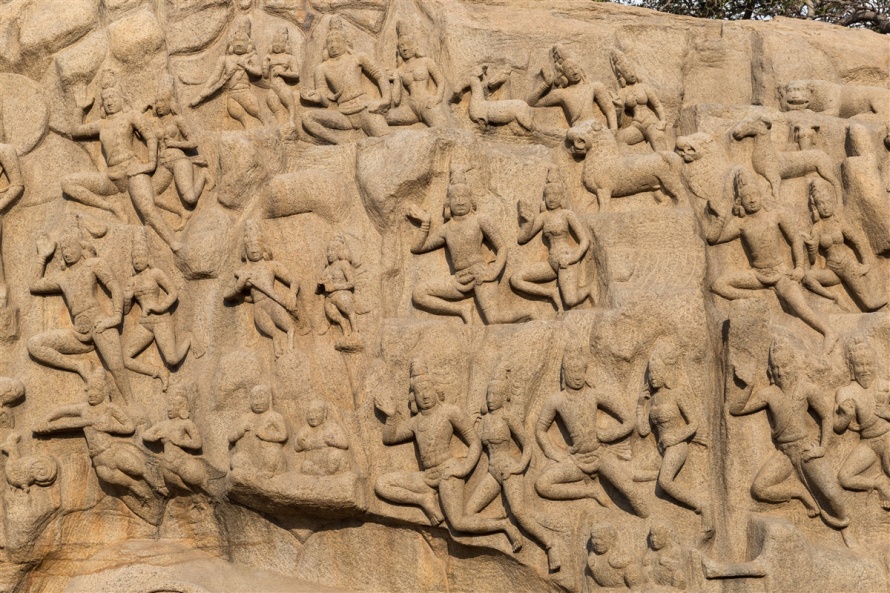 This is probably the highlight of this site, and likely to be the first monument you visit. Located behind the Sthalashayana Temple in the heart of the town, this sculpted relief is more than 30m long and 14m high.

The composition is both remarkable and quite unlike anything else I have seen in India, with a vitality and naturalism to the smoothly modelled animals and figures.

The relief panels consist of two large boulders covered with flying gods, goddesses, semi-divine beings, elephants and other assorted animals. These all converge into a central cleft, filled with sculptured male and female nagas, their hands held together in adoration over which water once flowed from a tank above.

To the left of the cleft is Arjuna, standing on one foot. A four-armed Shiva, holding the magic weapon which Arjuna hopes to win by his penance, stands nearby. Below this is a hermitage shrine of Vishnu, in front of which stands deer and lions.

Another interpretation for the yogi doing penance on one leg is that it is a depiction of Bhagiratha doing severe penance to bring down Ganges to earth to usher prosperity and happiness to the people.

To the right of the cleft below the elephants is the story of the cat who performed atonement by standing on one leg, tricking a group of rats. 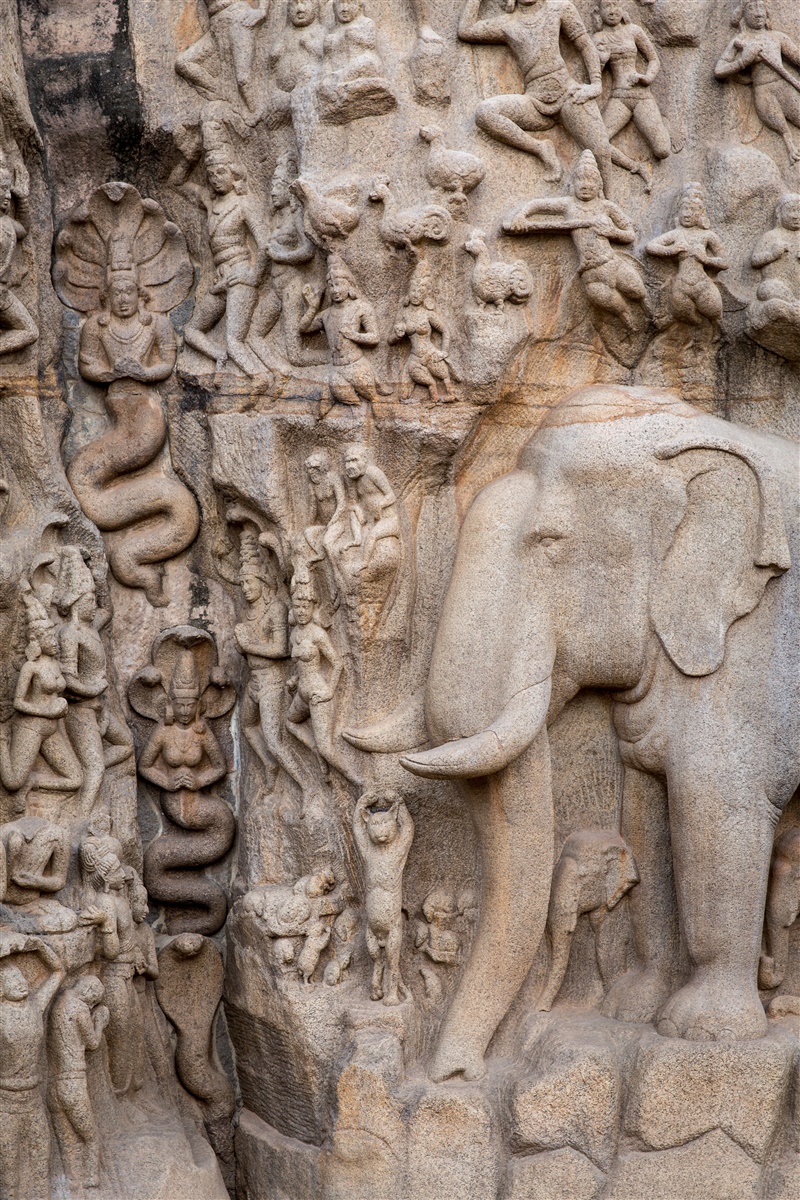 To the right of the carved panels on a platform sits an interesting and intimate carving of a female monkey suckling her baby, whilst being groomed by another monkey behind her.

Immediately to the left of Arjuna’s Penance is the Pancha Pandava Mandapa.

This is clearly unfinished, with only five columns and lion bases completed. However, do not be disappointed, as right next door is another highlight of this cluster of monuments… 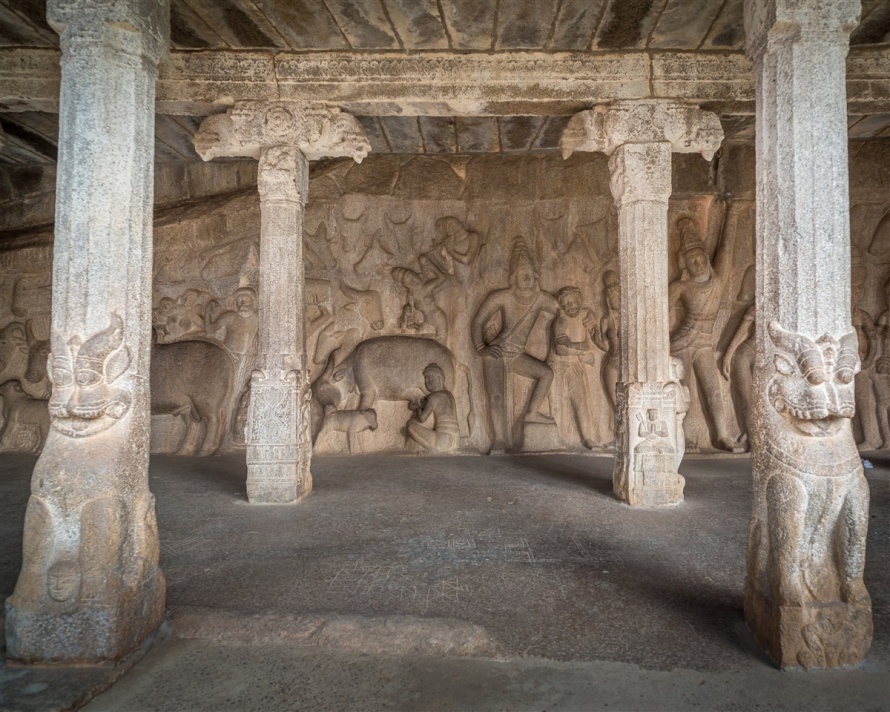 A 16th century colonnade shelters a spectacular long composition on the back wall, following the gentle curving contours of the rocky face. Krishna is shown shielding a herds and gopis from Indra’s storm by lifting up Govardhaha Hill. 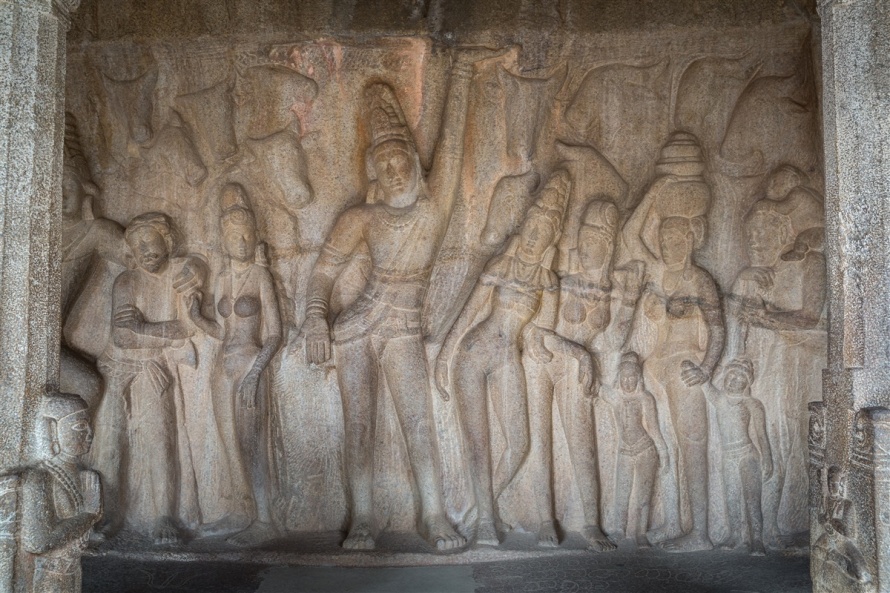 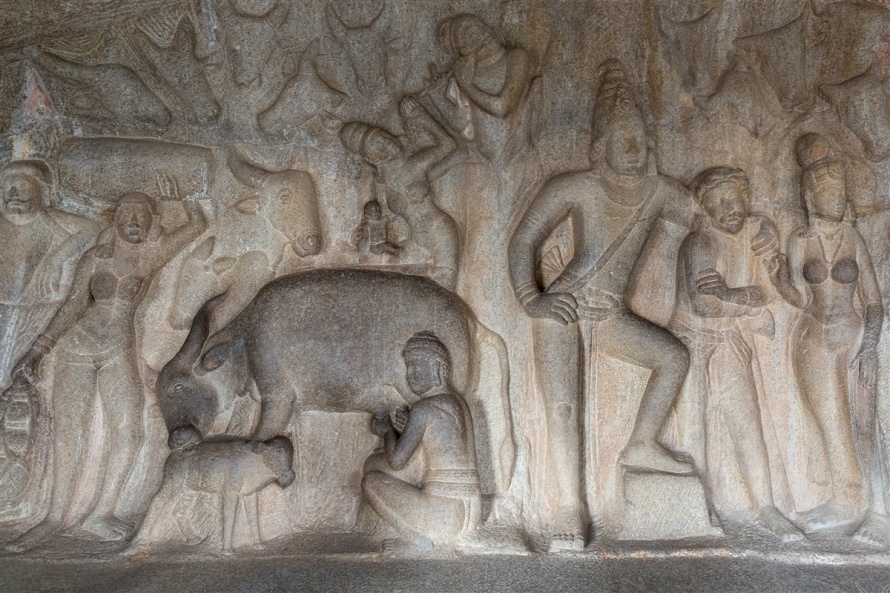 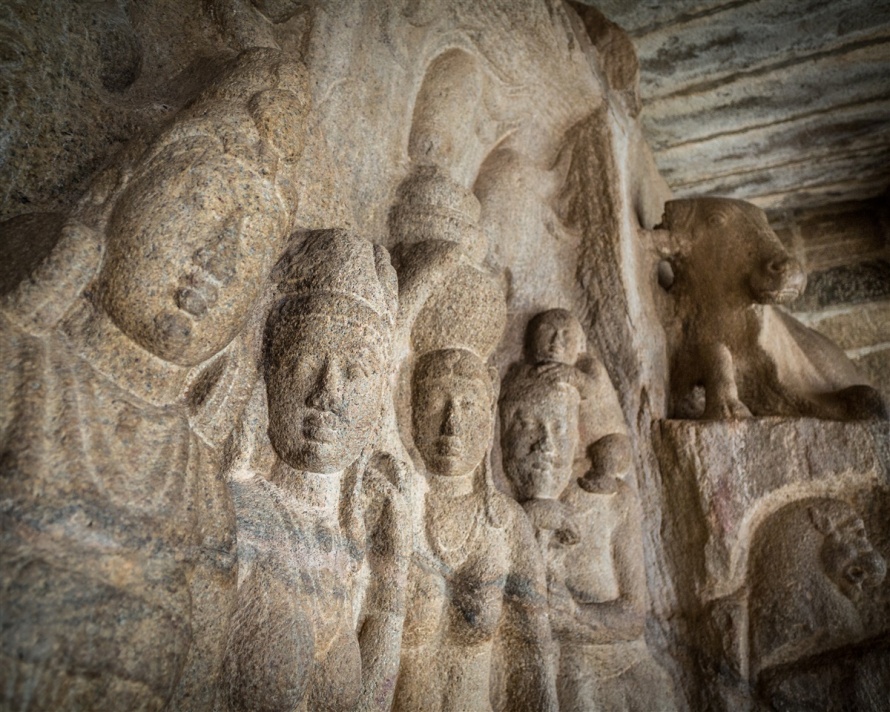 The details here are amazingly naturalistic, with tender images of a cow being milked whilst she licks her young calf. 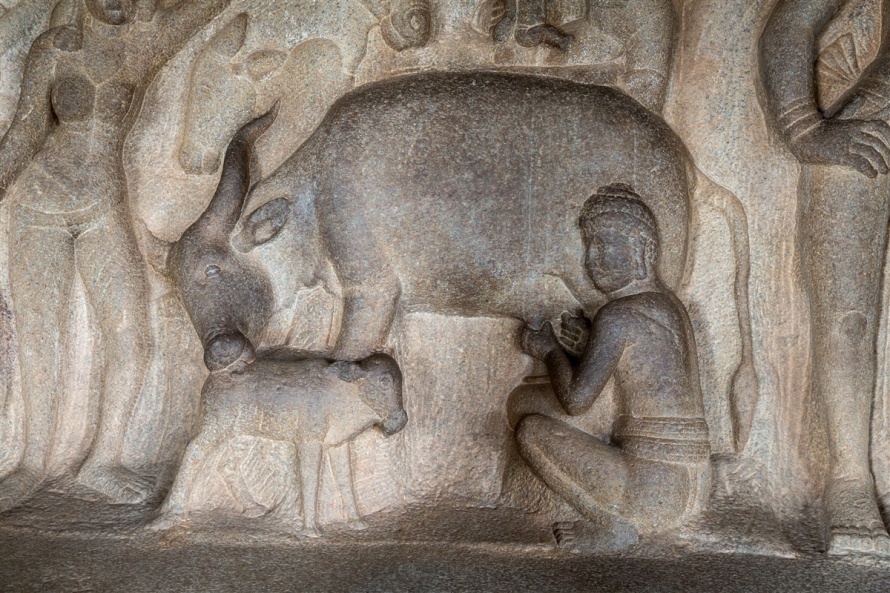 The whole scene is quite unexpected from the exterior of the temple, and visiting this temple in the early morning should ensure the best light possible to enjoy the secrets within. 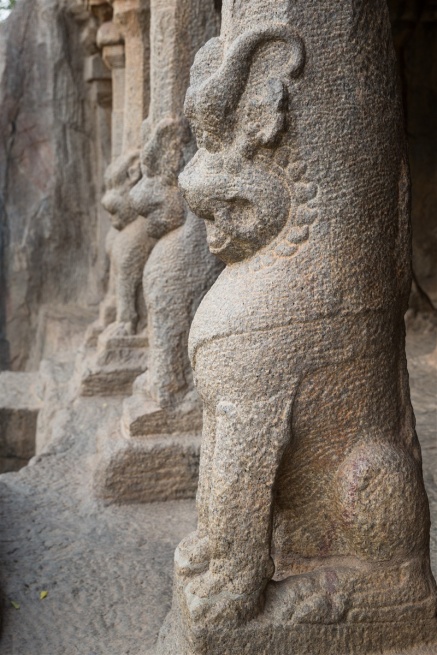 All three of the above monuments are accessible without entering the enclosure proper. To the right of Arjuna’s Penance is a gate and path that takes you into the interior of the complex. 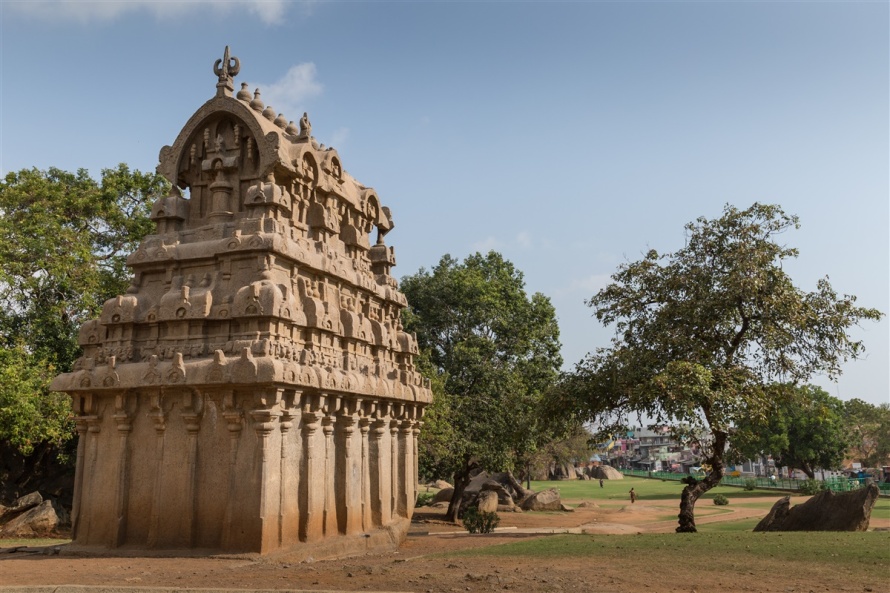 This is a free-standing rectangular monolith with a columned verandah, with lion columns flanked by guardians.

An image of Ganesha has recently been installed in the small sanctuary with the upper storey capped with a vaulted roof. At this point, you will need to remind yourself that this was carved out of a single boulder of rock, quite amazing.

This 7 meter high and 5 meter wide rock is estimated to weigh over 250 tons, and seems to pull off a balancing act like no other !

Its original Tamil name is “Vaanirai Kal” which literally translates to “Stone of The Sky God”.

In Hindu mythology Lord Krishna had an insatiable appetite for butter, and as a child would often sneak a handful from his mother’s butter jar. Situated on a hill slope just beyond the Ganesha Ratha this massive natural rock boulder is attributed to a bolus of butter the young Krishna would steal.

In 1908 the then Governor of Madras Arthur Lawley decided the boulder to be too dangerous to nearby homes and wanted it removed. Seven elephants were employed to push the rock. But to everyone’s surprise the rock couldn’t be moved and the task was abandoned. 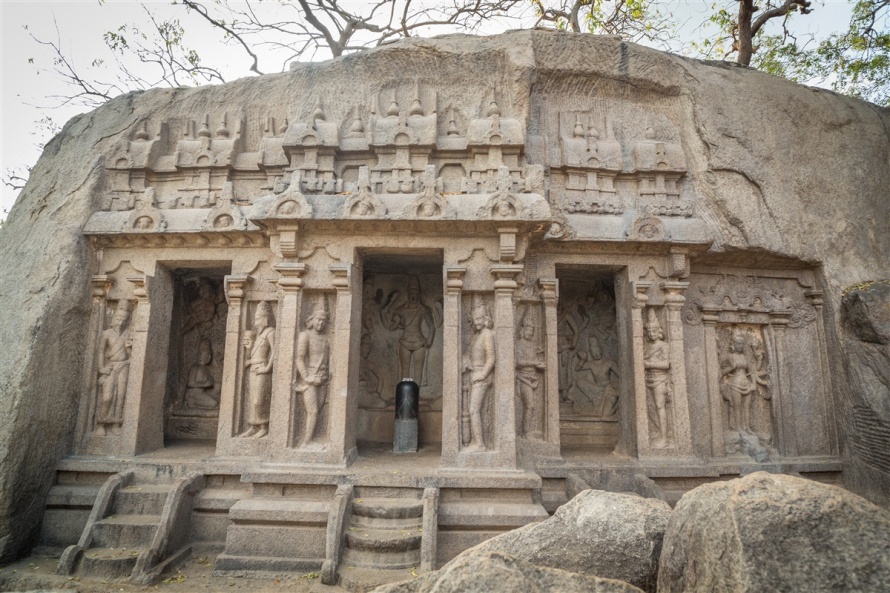 Located on the northern extremity of the enclosure, Trimurti Mandapa consists of a row of triple shrines, each flanked by pilasters, between which stand guardian figures. 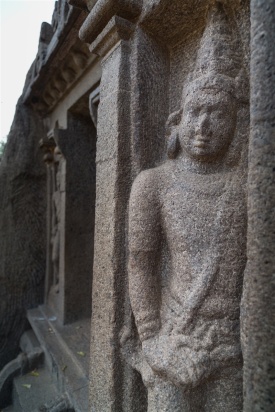 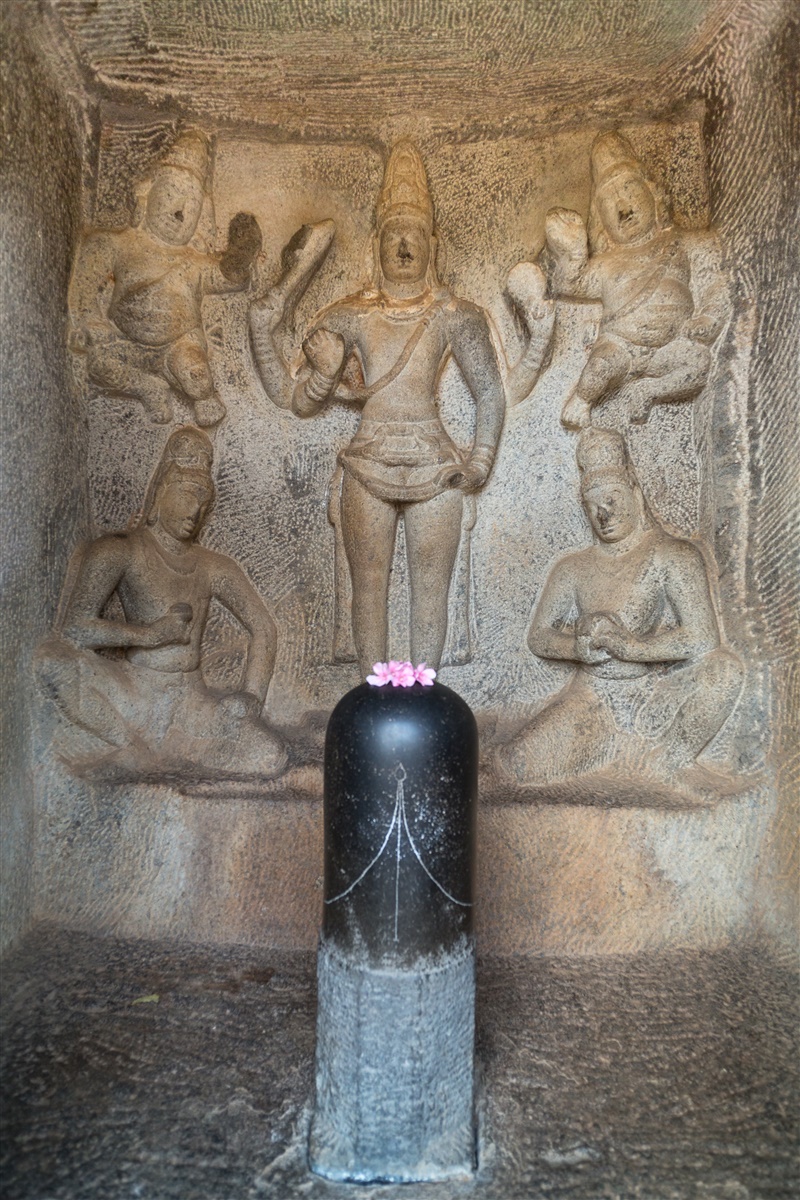 In front of the shrines on a raised platform is a curious “structure”. Carved into the rock is a perfectly spherical cutting, which I guess is a tank of some description. The accuracy of the cutting and the smooth sides is quite remarkable, I think any human today armed with modern technology would struggle to replicate such a thing. 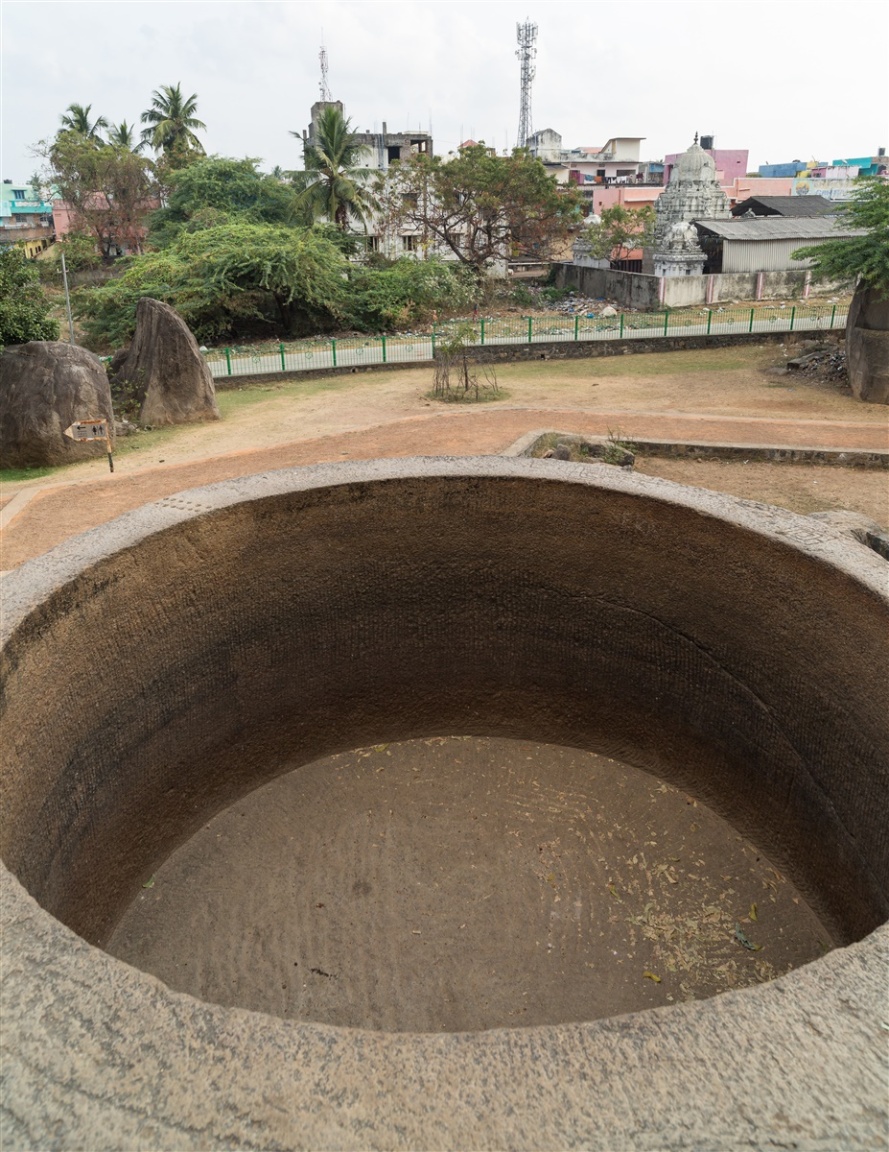 Heading back south towards the center of the enclosure you will reach the Varaha Cave Temple.

With lions carved at the column bases, this temple’s central shrine is flanked by guardians and Lakshmi (left) and Durga (right).

A large scale carving on the side walls show Varaha lifting Bhudevi and Trivikrama.

Look up, and you’ll see traces of paint on the caved ceiling.

Continuing south and perched on a rocky summit to the left, there’s little to see of this building now aside from some lower walls and a pair of pilasters.

Continuing on, you will soon reach the Mahishamardini Cave Temple, which is close to the lighthouse on the top of the hill.

It has two very beautifully carved frescoes of Durga, the mother goddess at both ends of the long hall of the cave. She is shown seated on lion her mount or vehicle with all her weapons. These are widely considered to be among the greatest masterpieces of Pallava art. 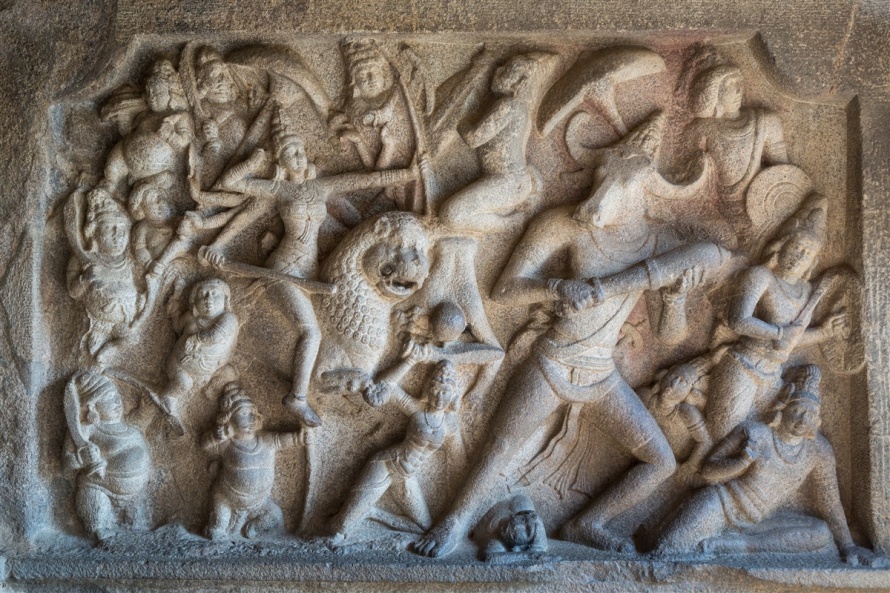 The depiction also features her posture of slaying the buffalo headed Mahishasura. At the other end of the hall, opposite to the Durga panel, the scene carved is of Vishnu in a reclining posture on the bed of Ananta multi-hooded serpent.

He is surrounded by the divine beings of heaven appealing him to continue with the creation of the universe. There is also a third chamber which shows a carved fresco of Vishnu.

Near to Dharmaraja Cave Temple (sadly I failed to visit), an unfinished second version of Arjuna’s Penance can be best seen from the road that skirts around the enclosure to the south, very close to the lighthouse. 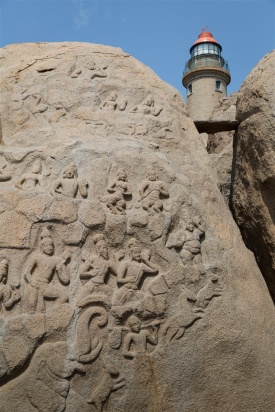 The central cluster of monuments at Mahabalipuram are open from sunrise to sunset.