Bhaja Caves (or Bhaje Caves) are a group of 22 rock cut caves dating back to the 2nd century BC,  located near Lonavala, Maharashtra. The caves are 400 feet above the village of Bhaja, on an important ancient trade route running from the Arabian Sea eastward into the Deccan Plateau (the division between North India and South India).

Access to the caves is via a flight of stairs from a car park by the roadside, but look out for the unassuming ticket office halfway up otherwise you may find the day brings a little more exercise than you were anticipating !

The excavations at Bhaja are from the Satavahana period, which makes them among the earliest rock up monuments in Maharashtra. Most of the 20 monasteries here have a verandah and hall with small cells provided with benches. Many of the monasteries are also associated with cisterns.

The site has three main highlights :

Cave 12 is possibly the oldest known apsidal-ended chaitya hall, the dependance on wood being particularly noticeable throughout. Socket holes indicate that a wooden facade was originally inserted into the horseshoe shaped opening over the entrance.

The interior is divided into three aisles by octagonal columns that interesting incline slightly inwards. The roof is fashioned as a curved vault with notches visible for teak beams, now lost. An undecorated hemispherical stupa stands at the end. 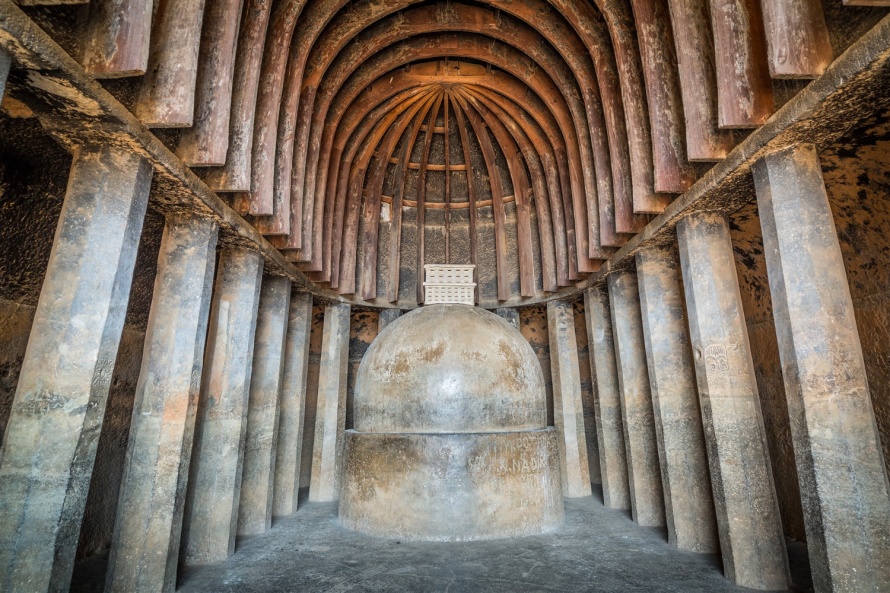 Cave 12 at Bhaja is of course the major attraction for the visitors, many people don’t seem to venture any further than here. A short walk to the right of cave 12 around the corner takes you to a further two places that are well worth exploring further. 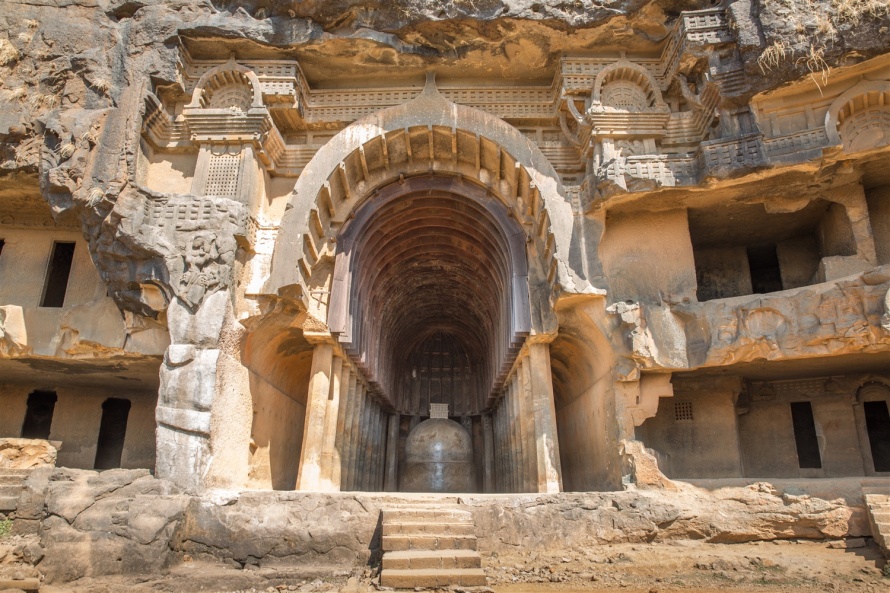 A notable part of Bhaja Caves is a group of 14 stupas, consisting of five inside and nine outside an irregular excavation. The stupas are relics of resident monks who died at Bhaja, and display an inscription with the names of three monks, Ampinika, Dhammagiri and Sanghdina. 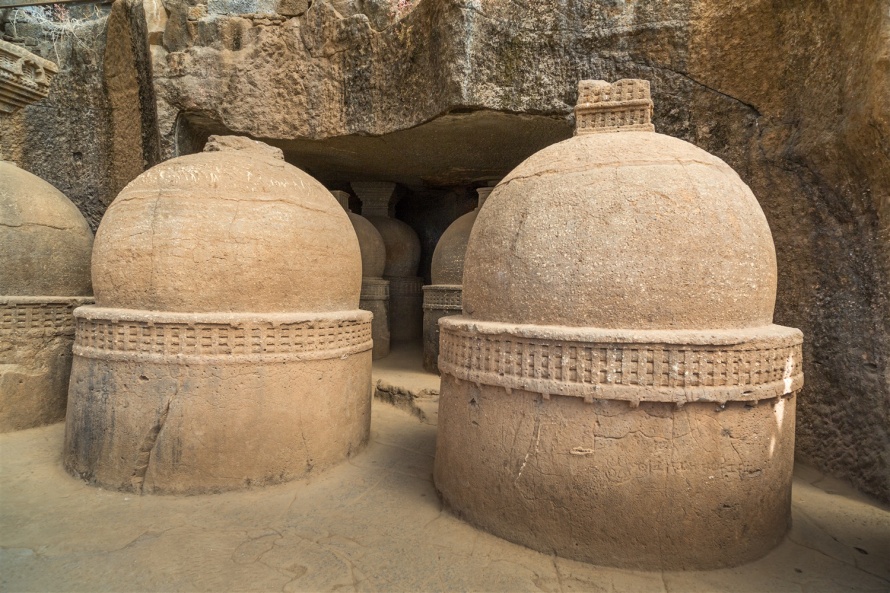 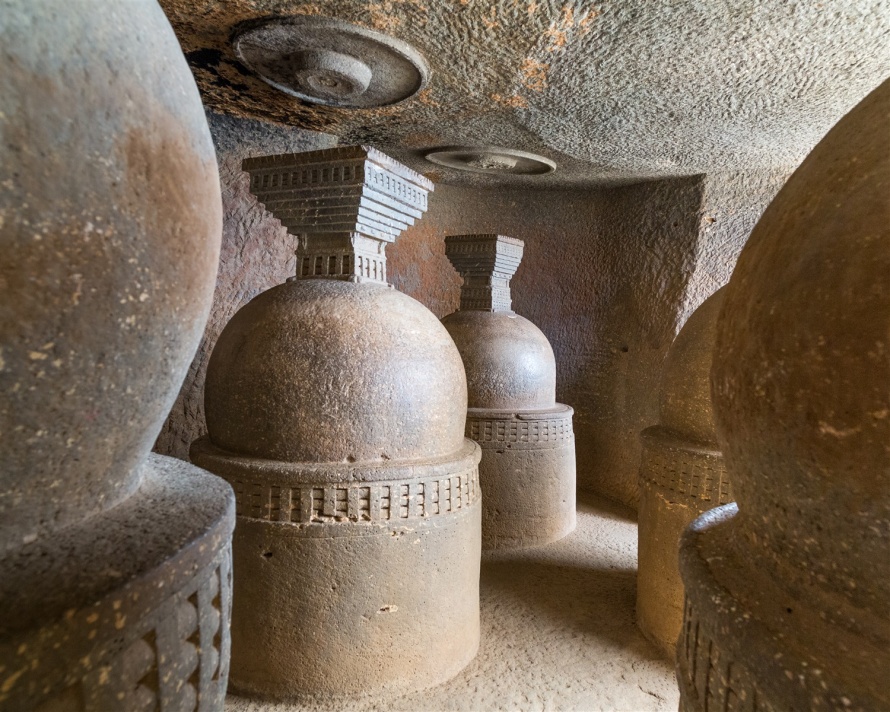 One of the stupas has “Stavirana Bhadanta”, which means “the venerable reverend” inscribed on it. The stupas have been carved very elaborately and are works of art in themselves. Two of them have a relic box on their upper side. 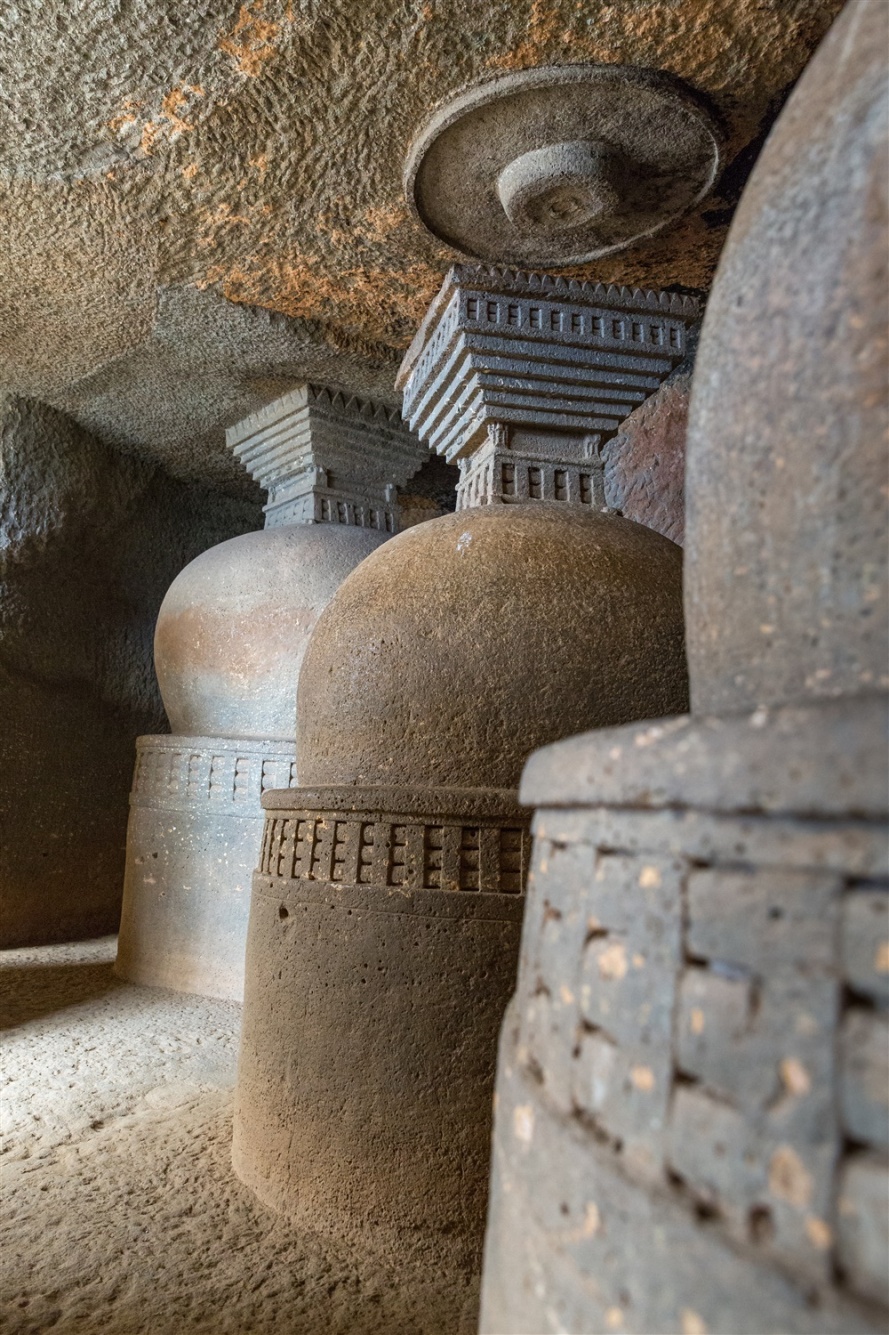 Continue walking with the valley to your right and you will soon reach Cave 19. This is an irregularly shaped hall which is approached through a columned verandah. Two doors at are flanked by guardian figures, with pierced stone windows allowing additional light. The verandah roof has an unusual half-vault complete with timber like ribbing. 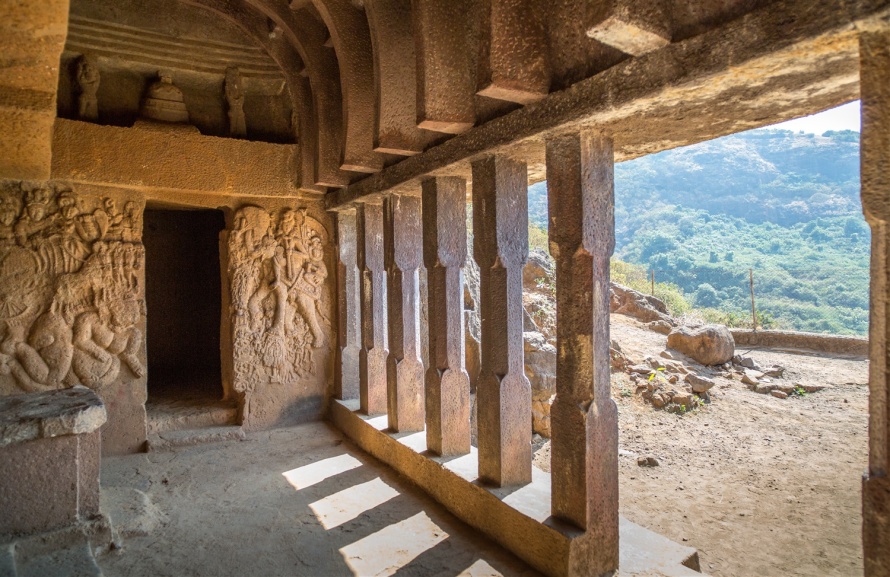 Carvings can be seen either side of the doorway leading to the right-hand cell of the verandah, and these are well worth a closer inspection. The left panel depicts a royal personage, possibly Surya, attended by two women driving an aerial chariot. The four horses pulling the chariot are trampling on a demon. 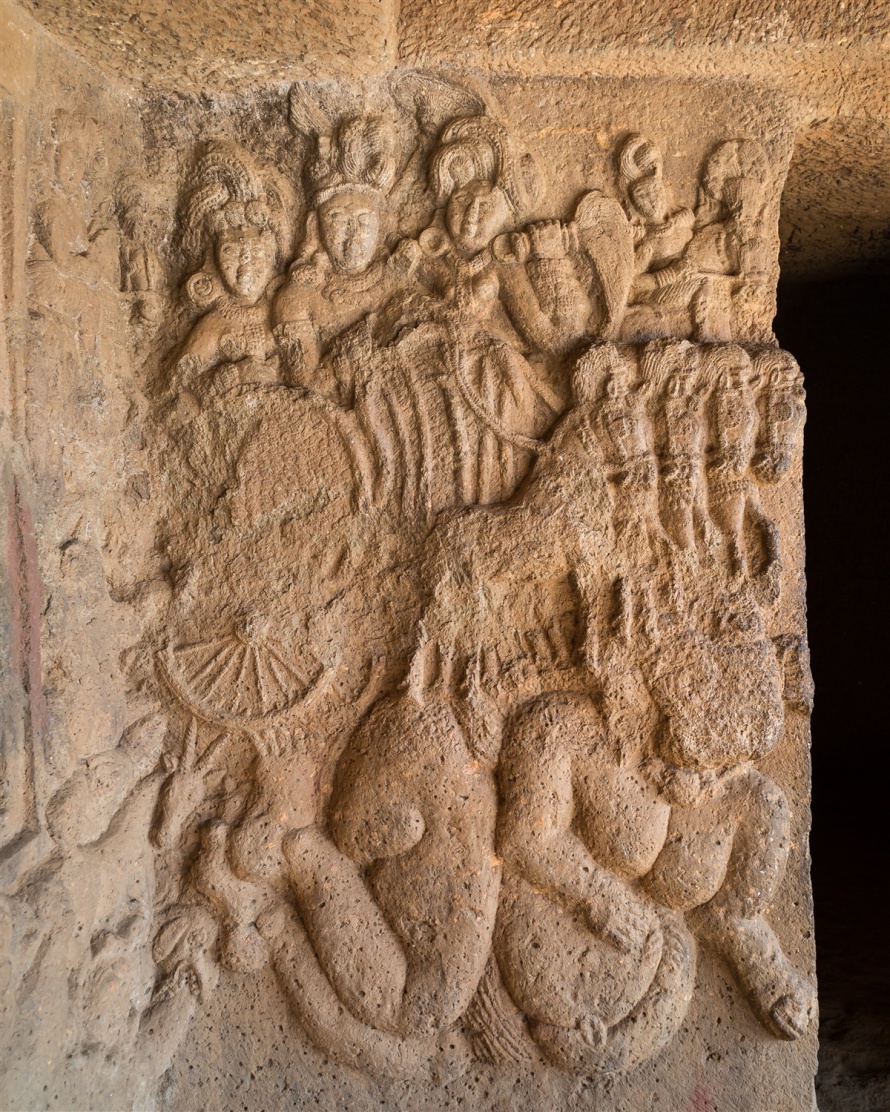 The right panel represents a majestic figure, probably Indra, riding a mighty elephant in the company of an attendant holding a banner and spear. Dancers, a man and a horse-headed woman appear beneath.

This cave also provides important proof regarding the history of the Tabla, an Indian percussion instrument, since these carvings from 200 BC show a woman playing tabla and another performing a dance. Unfortunately access to the hall is no longer possible.

Bhaja caves are very easy to locate, as the exit is located right on the old Pune-Mumbai highway. Take the NH4 towards Mumbai, and about 6km before Lonavala you should see an exit on the left towards Bhaja/Malavali (and one on the right towards Karla caves). Take the left and you should reach Malavali village, beyond that you will reach the base village of Bhaja, where ample parking is available.

A visit to Bhaja Caves can be easily combined with the other two well known cave complexes in the region; Karla Caves and Bedse Caves. It does make for a long day however, if you live in Pune or Mumbai it may be better to visit each one on separate days and spread the experience out over time.