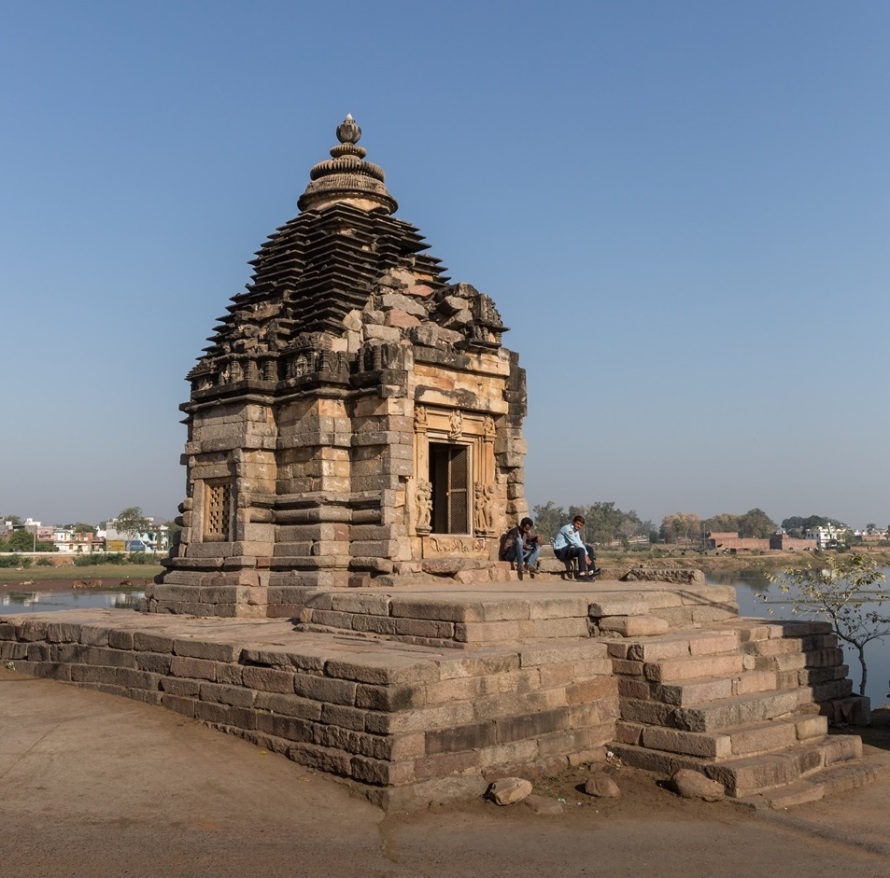 The Brahma Temple is likely to be the first monument you visit when touring the eastern group of temples at Khajuraho. It’s positioned on the banks of the Khajur Sagar tank, a pretty spot with the village as a backdrop. This humble little temple holds a bit of a surprise within, which I will come to shortly…

The temple was originally dedicated to Vishnu, an image of the god takes center stage on the lintel. Aside from that and figures of the river goddesses Ganga and Yamuna on either side of the door, there is no sculptural adornment on the temple walls. 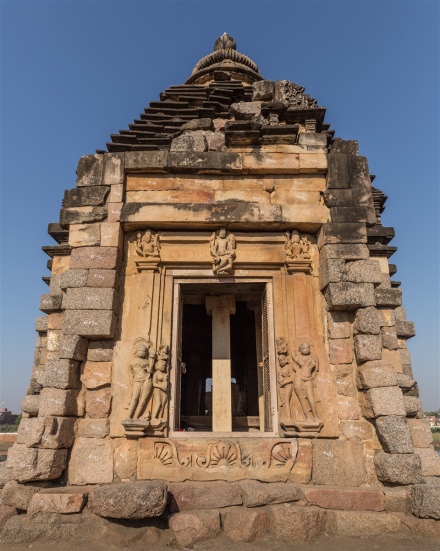 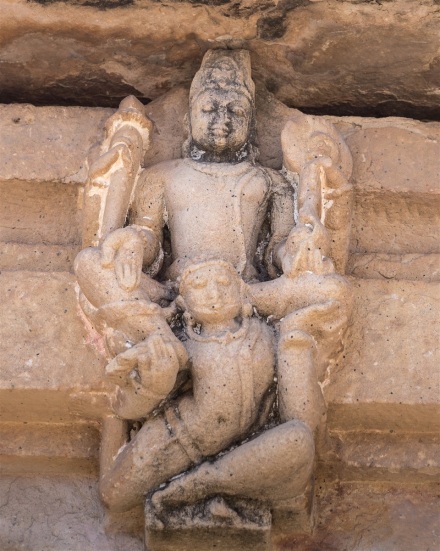 The temple has a simple plan, consisting of just a sanctum and porch, the later now completely lost. The roof is a pyramidal sikhara, with two side walls containing pretty latticed windows. 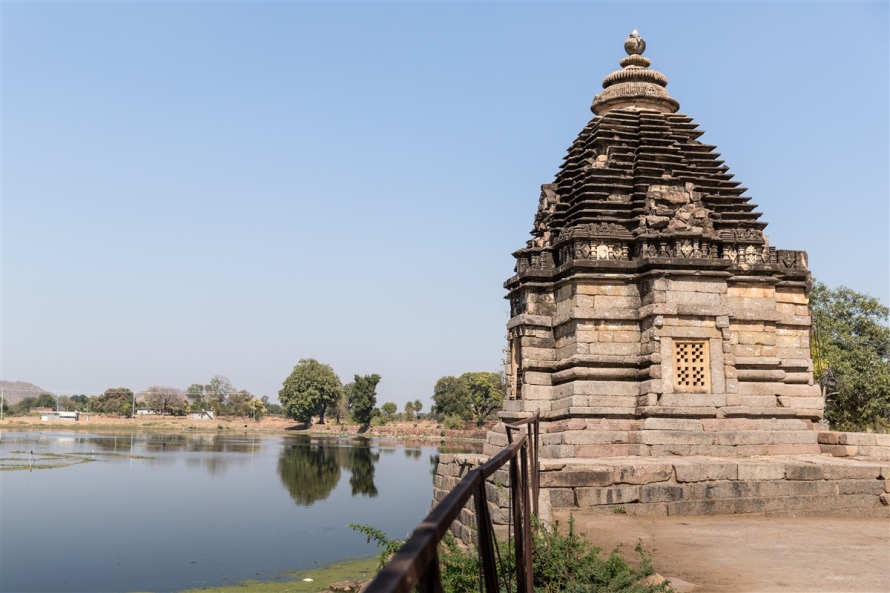 Despite some difference in details, this temple belongs to the same conception and early structural phase the more ruined Lalguan Mahadeva temple. It shares a common plan, design, ornaments and building material, and is consequently dated to around 900 A.D.

So why is a temple so clearly dedicated to Vishnu now called the Brahma Temple ? The answer to that lies inside, and I had better warn you, it’s one of those times when my camera starts working overtime… 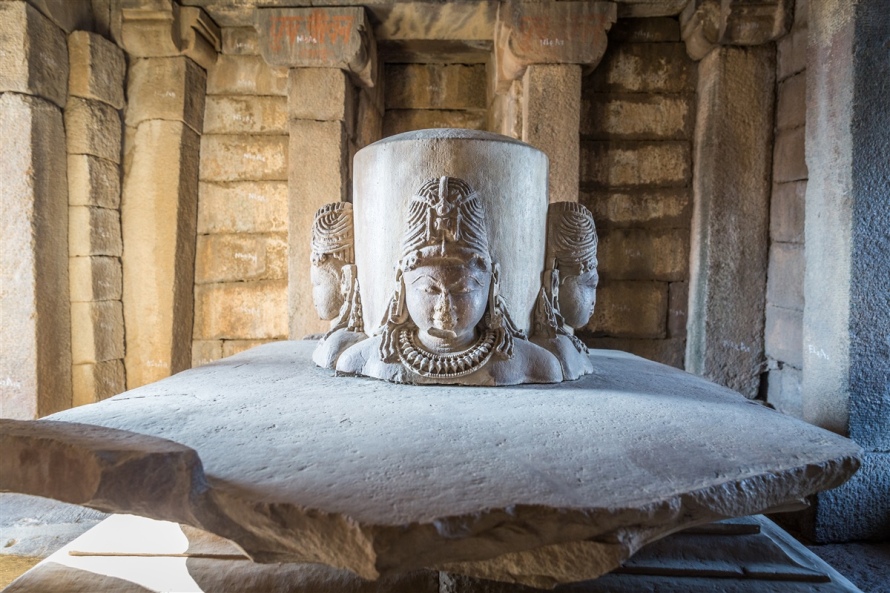 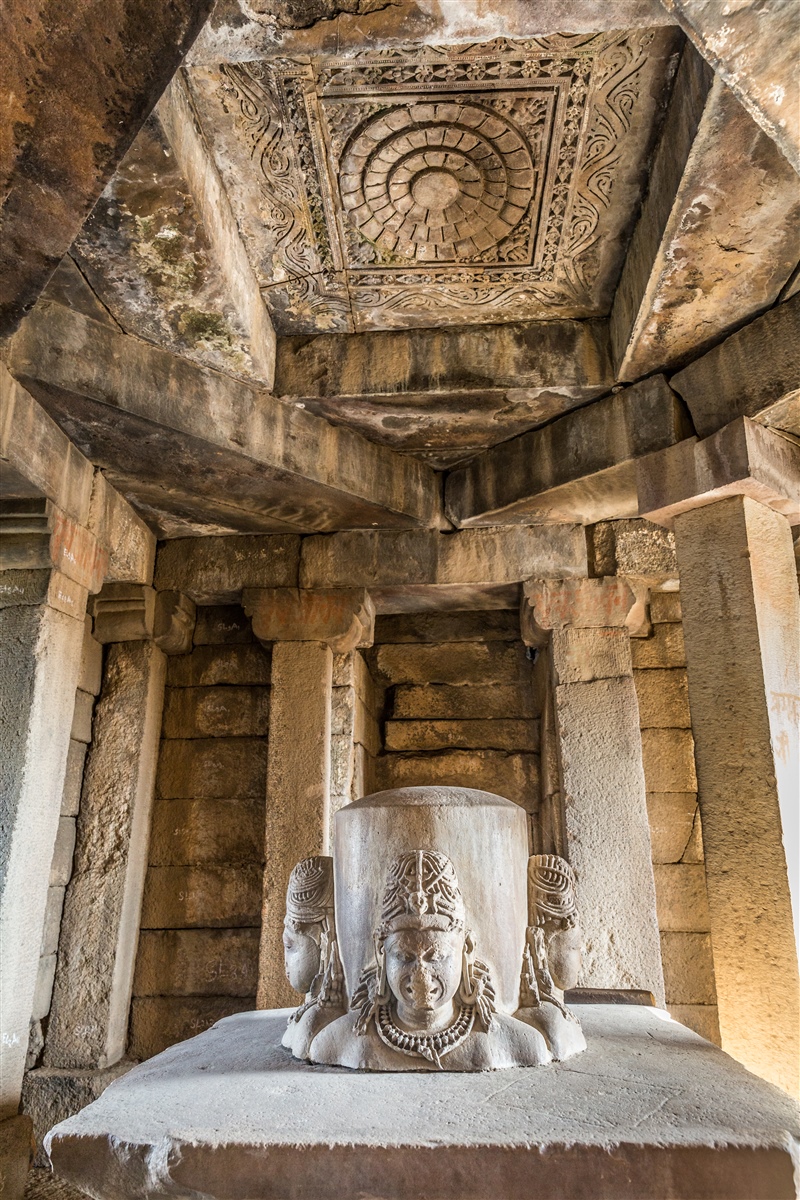 This temple is miscalled Brahma on account of a four-faced Shiva lingam, mistaken for the four-faced Brahma, that is now enshrined in the sanctum. 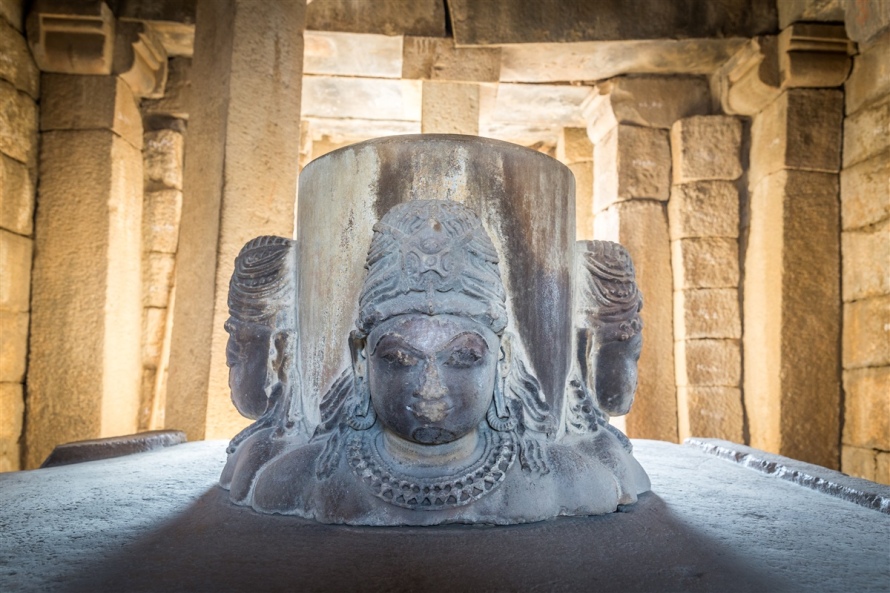 With the early morning light perforating through the latticed windows, the sanctum was hugely atmospheric, as if you’d entered another world. 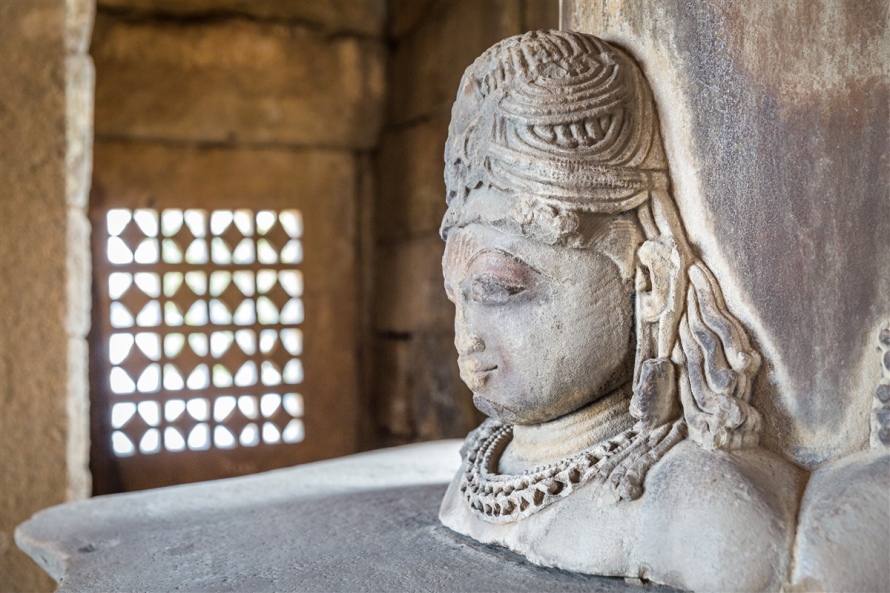 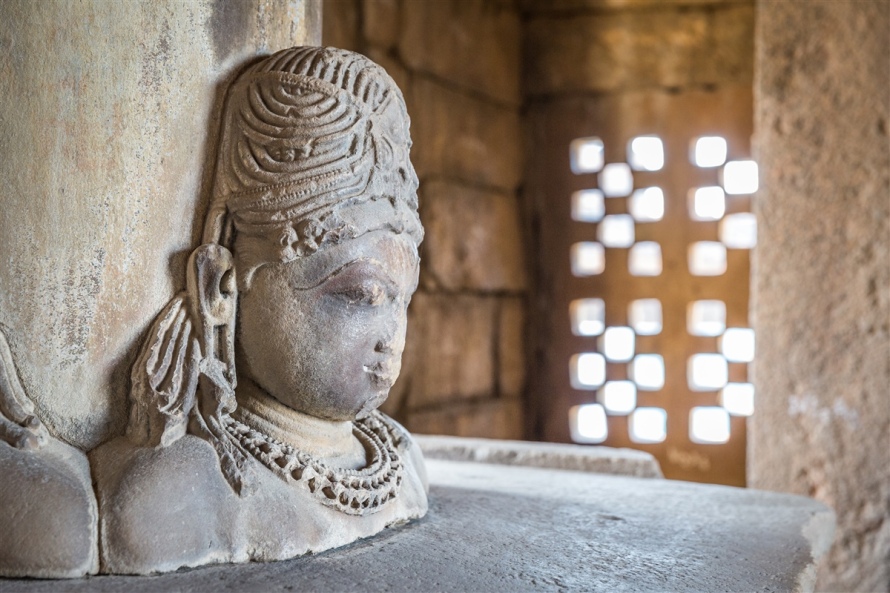 Obviously thus lingam is a much later addition to the Brahma temple, but I have no idea when it was placed here. I’ve been unable to find any reference to what either Alexander Cunningham or T.S. Burt found within the temple when they visited Khajuraho in the 19th century. 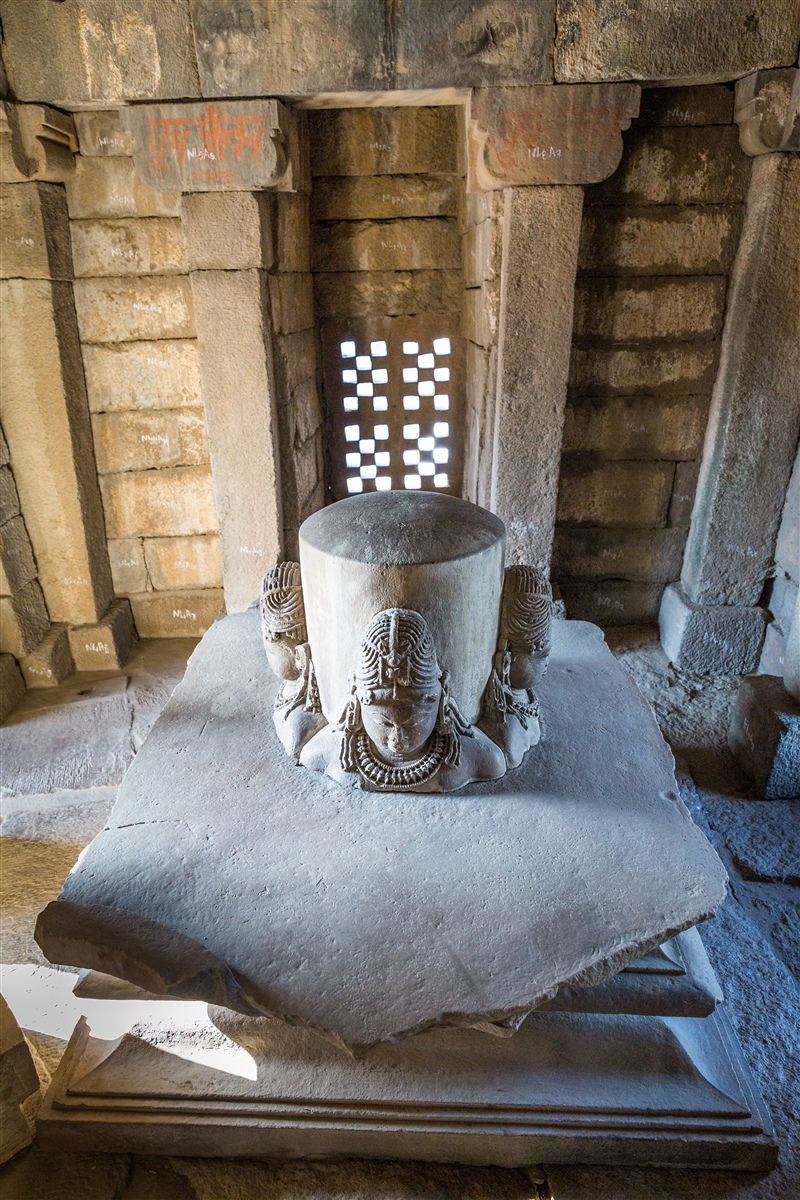 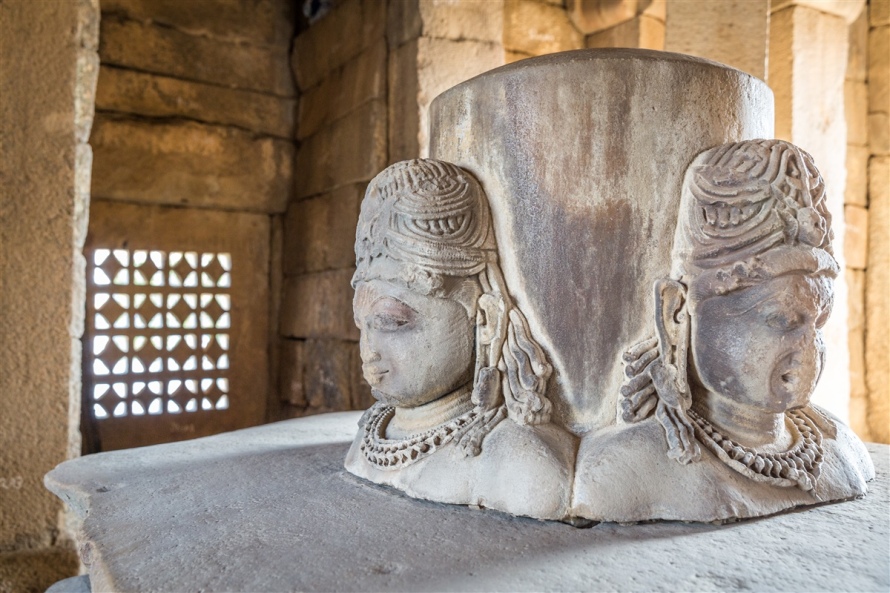 This is form of lingam known as a mukhalingam, they generally have one, four or five faces carved on the stone.

The four and five faced mukhalingams represent the five aspects of Shiva, those having just four faces carved on them are believed to have an invisible fifth face at the top of the linga, facing upwards to the universe.

The faces carved on the cardinal points of the lingam are not completely identical, there are very subtle differences. For example, the face looking south has the mouth open, and with a distinctly angry expression.  This is because the southern-facing image represents the Destroyer aspect of Shiva. 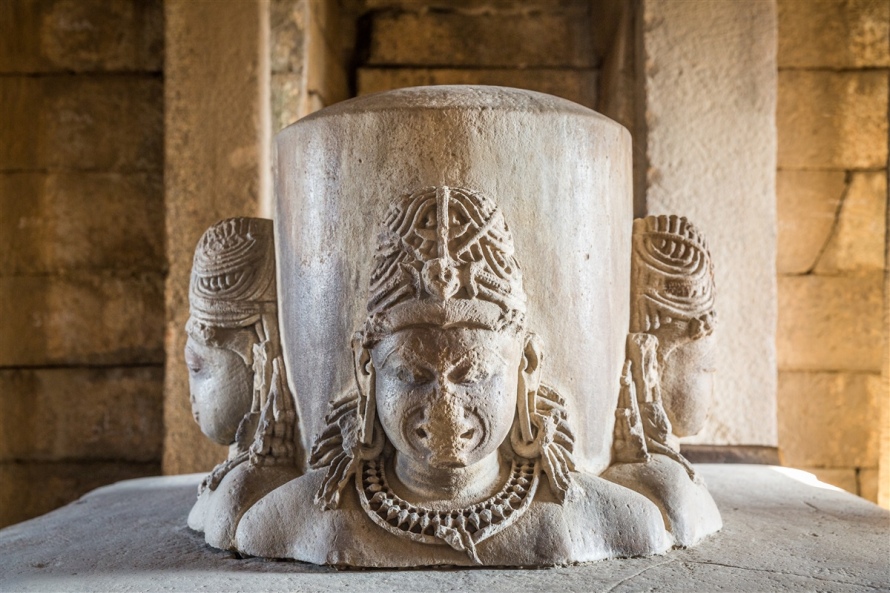 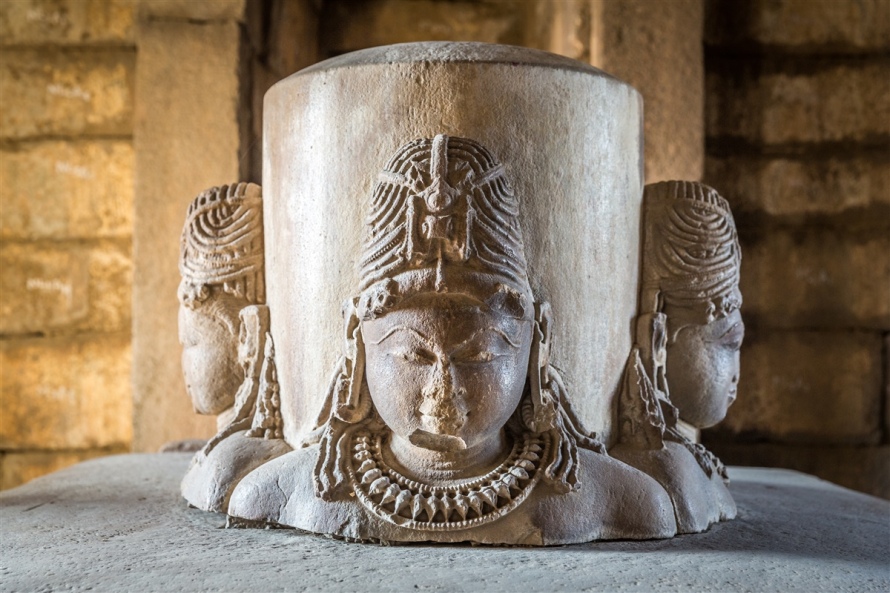 For those interested, the five aspects of Shiva mapping to the cardinal points goes something like this : 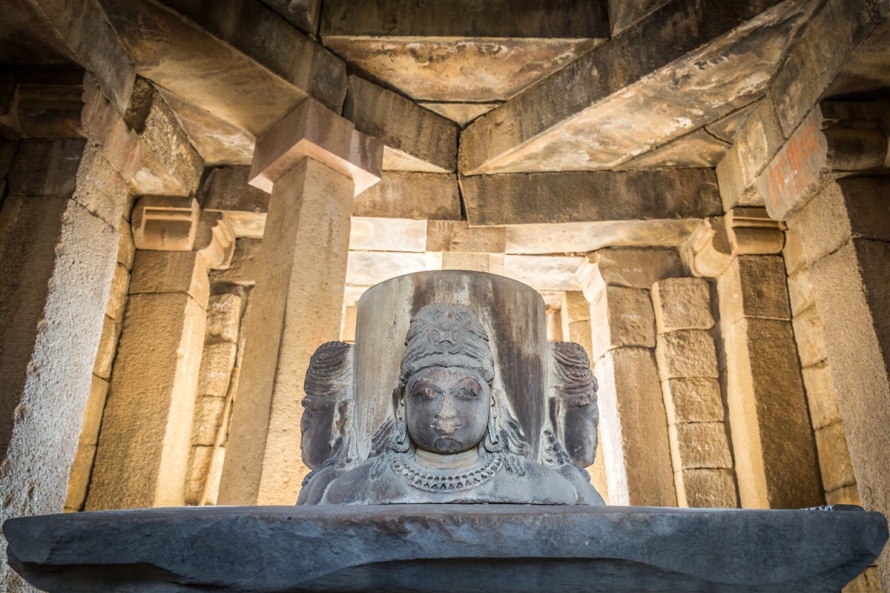 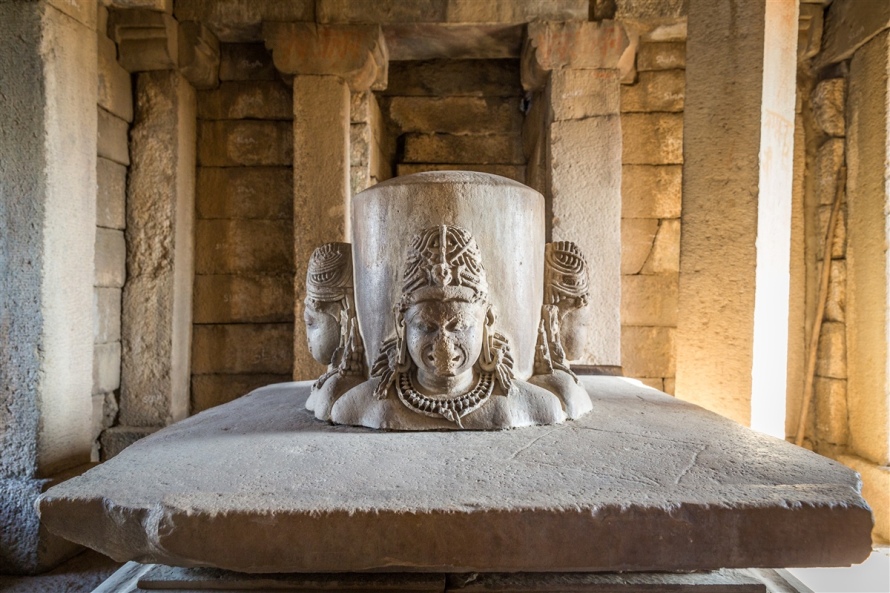 I’m sure there are even more subtle differences carved on these four faces. If anyone can spot them I would be interested to hear – just add a comment below !