The Chhatris of Orchha

One of the things I love about my trips to india happens long before the plane lands in the country. Each autumn I start the annual routine of meticulous planning, every trip involves Pune to start with to visit friends and completely relax, and then I head off to somewhere new to explore.

Last autumn whilst doing some fairly random internet searches I came across a photograph of the chhatris at Orchha, and I was instantly utterly spellbound. The scene was quite unlike anything else I had seen in India, slightly reminiscent of Angkor Wat in Cambodia, but quite unique.

In an instant I knew this was where I was going to head to in the new year. I immediately started building a plan with Orchha as the focal point and encompassing other sites that were within striking distance of the village, be it sometimes a 2-3 day excursion. This worked out brilliantly, as I was finally in a position to also see two sites that have been long on my “must see” list; Sanchi and Khajuraho.

These chhatris are in fact memorials (or cenotaphs), they don’t house any human remains but instead have been built on the spot where royals were cremated. This one of a number of locations in India where you will find cenotaphs of Hindu kings. 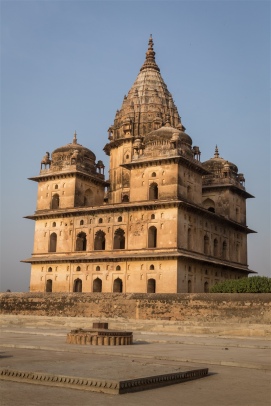 In terms of size and architectural features, one chhatri stands out from the crowd here. This is the monolithic chhatri for Raja Bir Singh Deo, who ruled over Orchha from 1605 to 1627, during the height of the city’s political power and architectural achievements.

If you think it has the slight appearance of being unfinished you would be correct, this chhatri would have been one of the finest but its domes were never completed.

The entrance to this chhatri faces the river Betwa, it was thought the deceased ruler would like to take a regular bath and enjoy the natural beauty of the river in his next life.

Just few meters away is the significantly smaller chattri of Kirpa Ram Gaur. It may be somewhat overshadowed by its neighbour, but the similar architectural elements and location just a handful of meters away from Bir Singh Deo gives us a clue that this is someone significant.

Kirpa Ram Gaur was a military commander during the time of Bir Singh Deo, and earned popularity by his many victorious campaigns. This is the only chhatri here which belongs to a person of non-ruling family background. 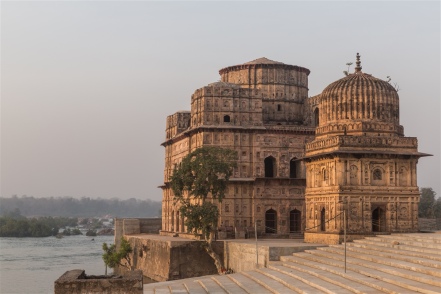 Having made full use of the early morning light by the river I decided it was time to enter the complex itself – this is where that meticulous planning didn’t quite work out !

The chattris complex doesn’t open until 10am, and on top of that access is only possible if you have purchased a ticket from Orchha Fort for that day. The Orchha Fort ticket covers all the monuments in the village and can’t be purchased anywhere else. So I resigned myself to returning here a few days later… 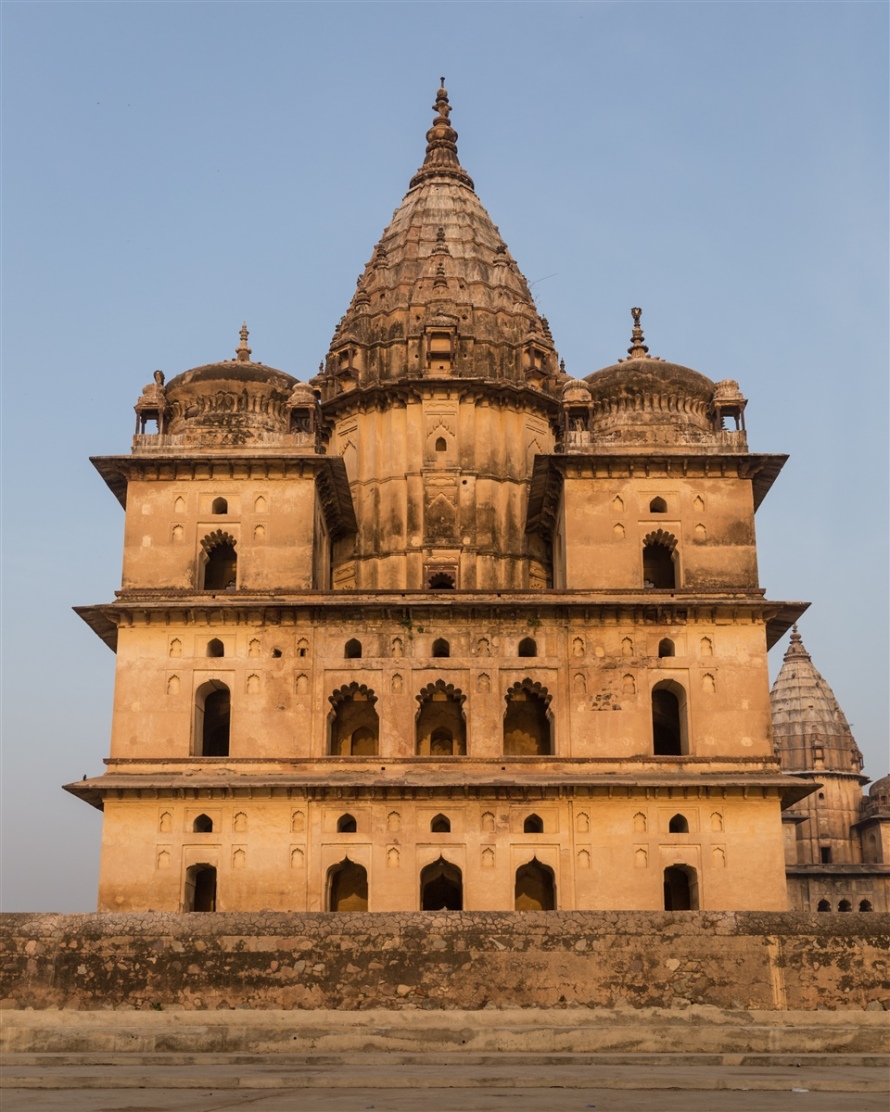 Armed with my “Orchha Monuments” ticket having visited the Fort complex in the morning, I returned to the banks of the river Betwa a few days later to finally get to see the interior of the chhatris complex. The entrance is hidden away off of a side alley leading away from the ghat, but before entering walk on for a few meters to see the chhatri on your right.

This is Bharti Chandra’s chhatri, built on a more modest scale in 1554, and is in fact the oldest of the cenotaphs to be found here. Access appears to be difficult as the ground is quite overgrown, so I only admired from a distance. Having passed through the main entrance, the more familiar set of cenotaphs are laid out before you.

The main chhatris here are in two rows set within pleasant and well maintained gardens. The sheer scale of these monuments feels very much as if you are walking amongst castles. Access to the upper levels of these buildings no longer seems possible, but there are great opportunities to get some “aperture shots” of the architecture surrounding you (a personal addiction of mine 🙂 ). 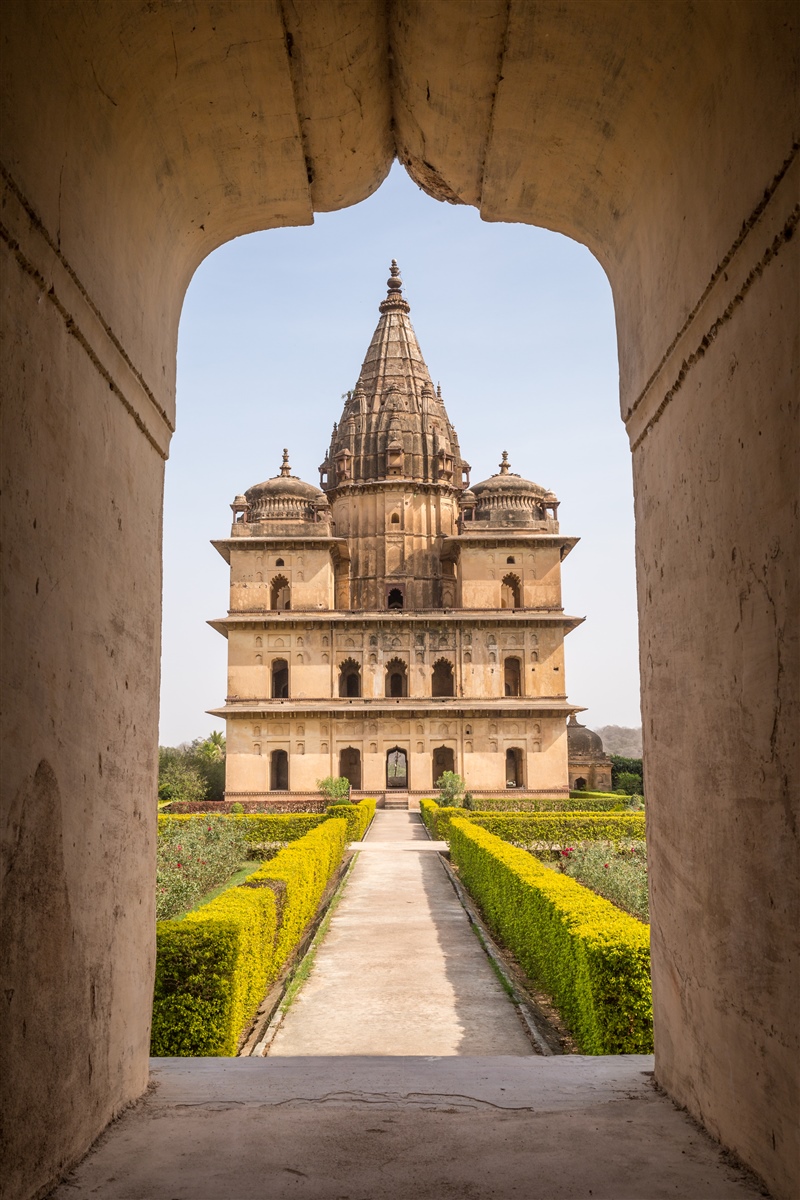 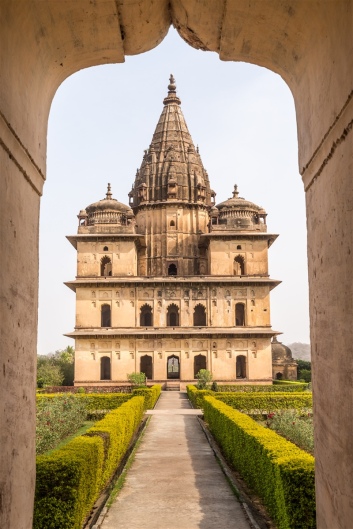 I’ve tried to complile a list of all the rulers who have memorials here, but thus far I haven’t accounted for all 15 chhatris. The list at present is thus :

Madhukar Shah (d.1592)
A contemporary of Akbar, and greatly expanded the Bundela territory.

Pahad Singh (d.1654)
Declared ruler of Orchha by Emperor Shah Jahan after the murder of his brother Jujhar Singh.

Banka Umed Singh (d.1742)
Governor of Orchha Fort, belonged to the ruling family but was not in line of succession. 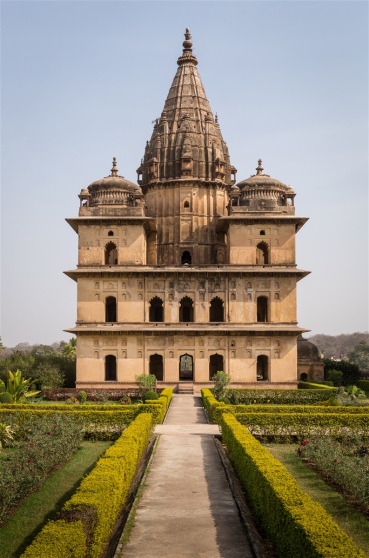 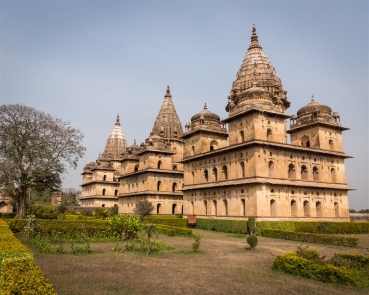 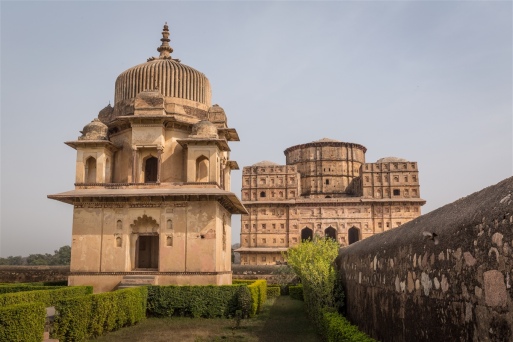 The chhatris at Orchha completely lived up to my expectations. They’re a wonderful set of monuments, seemingly frozen in time along with the other sites in medieval Orchha. I made a repeat visit to these monuments later in the day, but this time looking to get some shots at sunset with the river Betwa in the foreground. My blog on the best location for a stunning Orchha sunset details where these can be captured and the pros/cons of each possible location.

Interestingly the name Orchha means ‘hidden’, which in many respects is how Orchha still feels today. It does receive quite a few visitors each year, and yet mass tourism has not overshadowed everything, at least not yet. Orchha remains a little undiscovered I think, I’m just glad I managed to stumble across its existence. 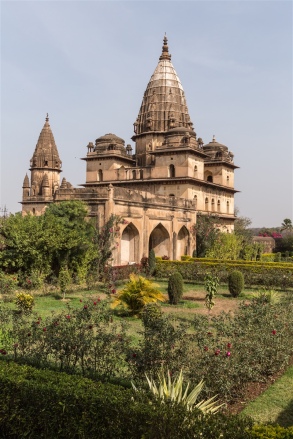 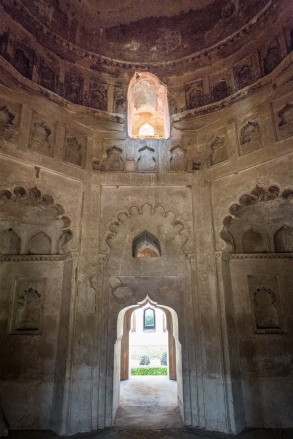