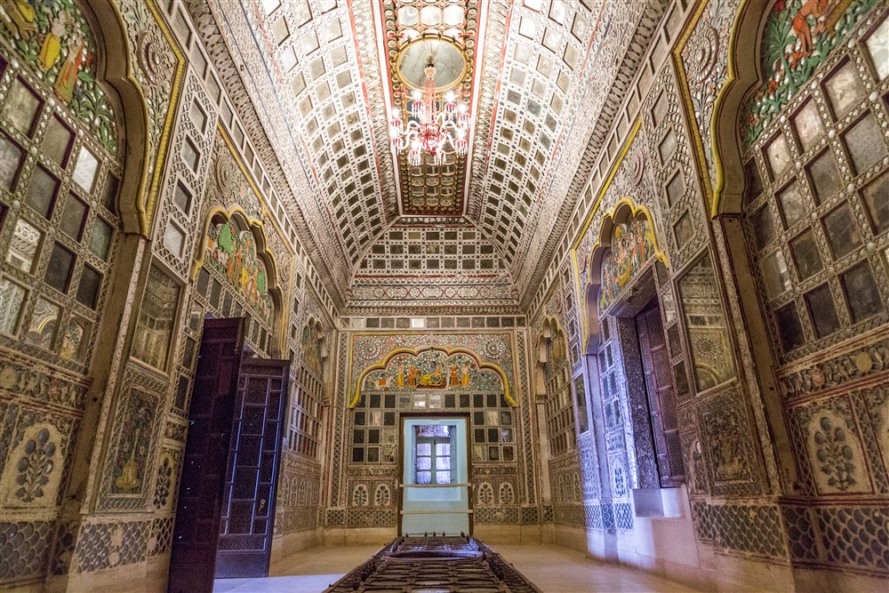 Make no mistake, Mehrangarh fort is absolutely huge. Anyone planning to see the fort for just a couple of hours is not going to do the place any justice at all.

I ended up spending more than two half days here, firstly exploring the exterior of the fort on the day I arrived in Jodhpur, and then the following day spending over 4 hours touring around the interior.

So my account of Mehrangarh fort is in two parts :

It’s well worth taking of advantage of the audio guide that is provided when purchasing your entrance ticket. I’m not always a fan of these, but the one at Mehrangarh fort is probably the best I have experienced, and it really helps bring the place to life.

Shringar Chowk is the first courtyard you come to. In one corner is a marble throne, where the new ruler of Jodhpur is presented to its people, the last being Gajaraj Singh II.

Immediately the quality and detail of the Jali work goes up a level from what can be seen on the exterior of the fort.

The Daulat Khana is a three storey building with arched openings on all levels. Built in early 18th century by Ajit Singh and known back then as Ajit Vilas, its present name literally means “Wealth Store” and is a term that is often used to indicate a treasury, but sometimes the most prestigious royal apartment. This room is now used for the display of some of the museum’s prize exhibits.

In this room there is a wonderful collection of 18th and 19th century howdahs (seats for riding on elephants), decorated with some fine silver repousse work. 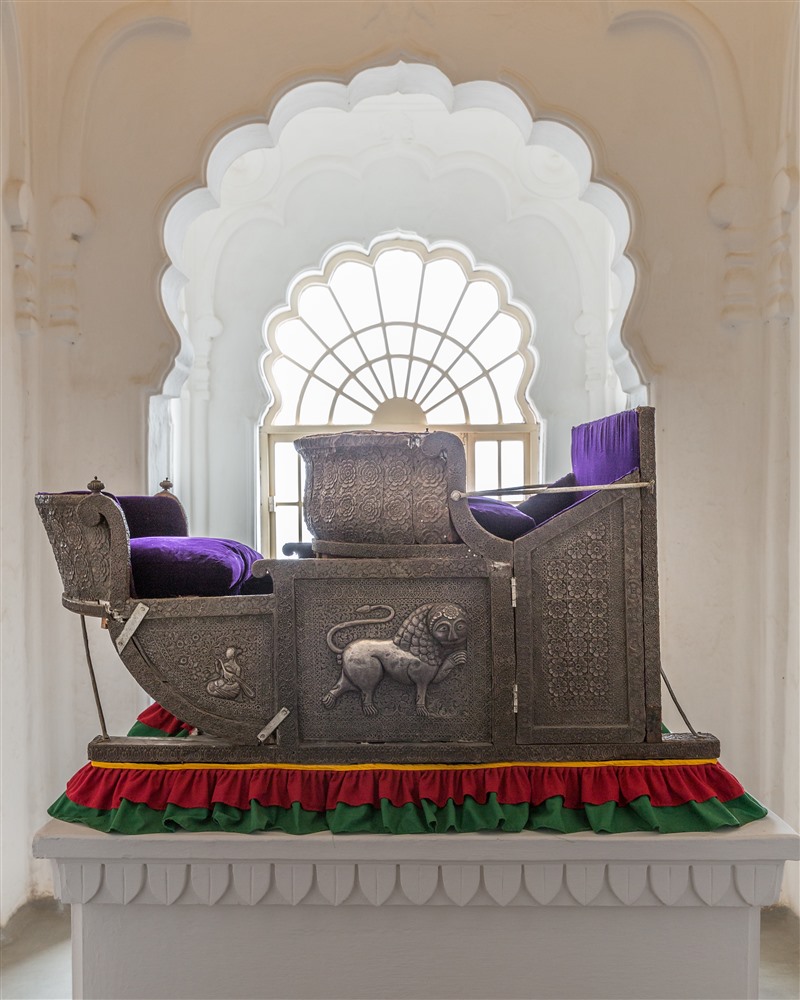 These elephant seats from the Royal Collection are regarded as the finest in the country. A priceless and unique historical Howdah is a silver one presented to the Maharaja Jaswant Singh I (1638-78) by the Mughal Emperor Shahjahan. 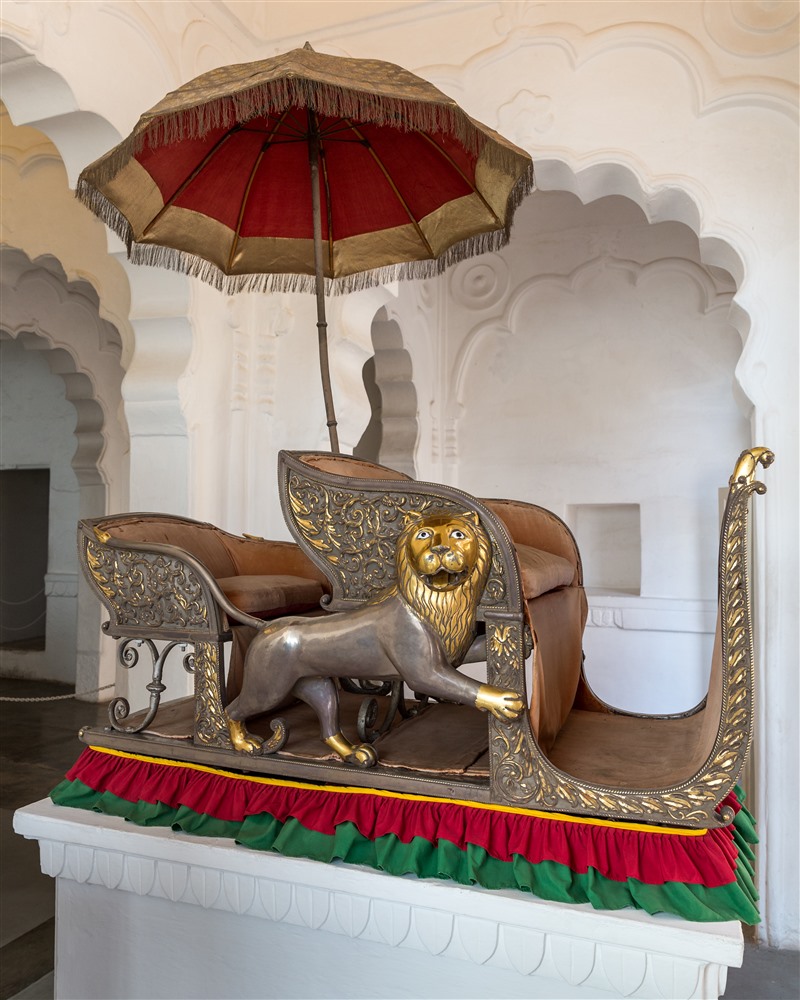 Palanquins (litters) were a popular means of travel for royal and noble ladies up to the second quarter of the 20th century. They were also used by men on very special occasions.

This gallery displays one of the richest collections of palanquins in Rajasthan.

Before exploring too many more rooms in the fort, be sure to find an open platform just beyond Shringar Chowk that gives some wonderful views over the SW, including the old (blue) city, and Jaswant Thada. 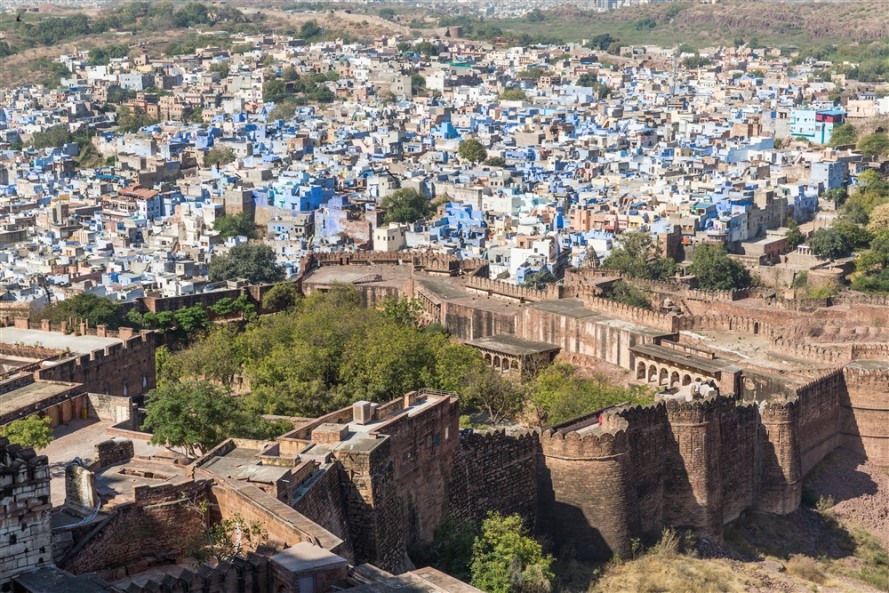 I found quite a few visitors failed to go here, which is a shame as it offers some of the best views of the wider landscape possible from the fort. 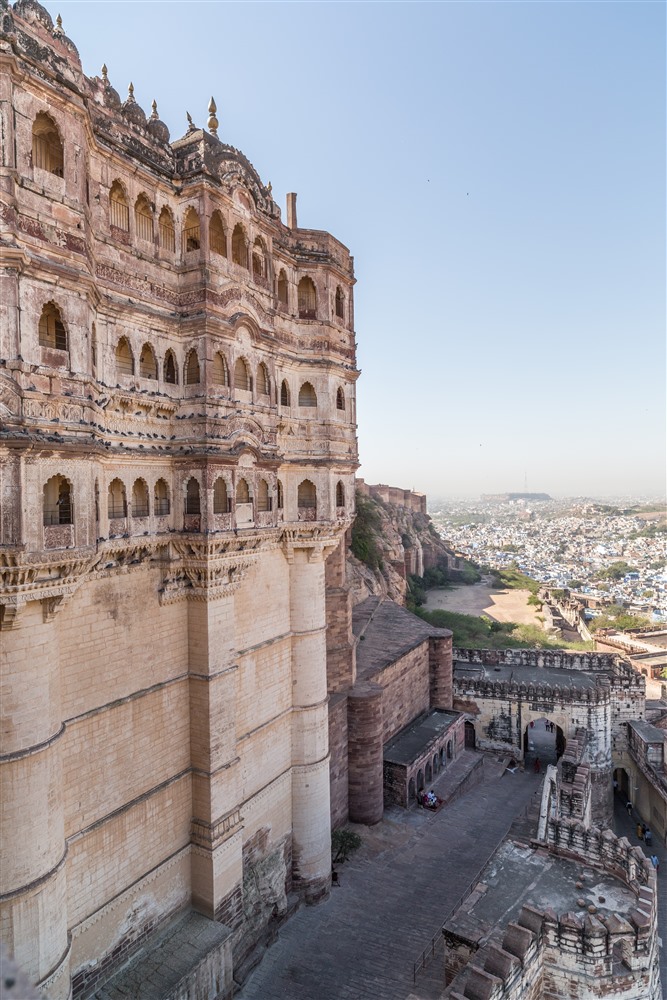 Star of the show here is Mahadol, a golden palanquin that was a gift from the governor of Gujarat in 1730 A.D.

There are numerous display cabinets in this room, displaying items such as heavily decorated swords which perhaps were more ceremonial than functional at the time.

In another room is a gallery displaying a large collection of miniature painting, and perhaps the finest collection of paintings from the Marwar School.

Court painting in Jodhpur developed greatly during 17th century through the association of Marwar Rulers with the Mughal Emperors. During the 18th and 19th centuries it evolved into a distinctive Rajasthani style, combining Mughal naturalism with local folk style and bold colours.

Jodhpur paintings later took on an even more exuberant turn under Maharaja Man Singh (1803-43), and dozens of paintings of the ruler, his nobles and his ladies were made. 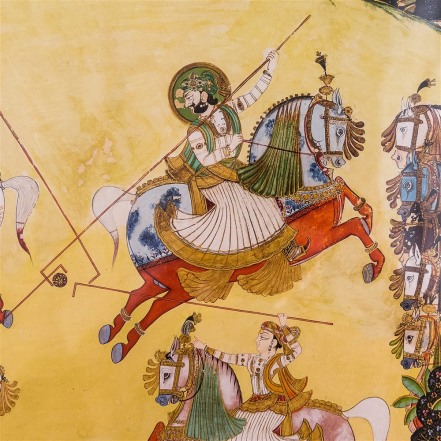 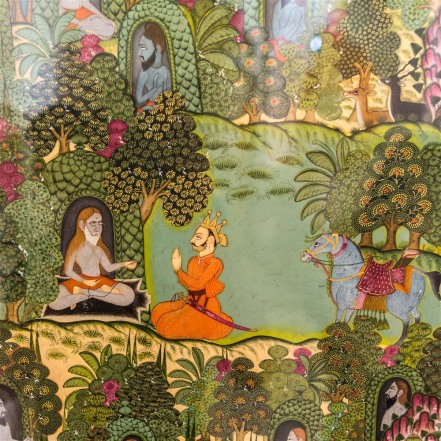 Also housed here is an idol of the goddess Gangaur, one of the incarnations of Parvati. Gangaur is worshiped by married ladies for longevity of their husband’s life and my unmarried girls for a suitable match. This silver idol is dressed in traditional Rajasthani costume and jewelry from the 19th century.

This concludes the tour of the downstairs for now, and it’s time to gain some altitude…

Under the arches are painted gesso panels of sacred subjects: Brahma, Shiva with Parvati, Devi, Krishna and Ganesh all sit enthroned; while in other panels Krishna plays the flute and lifts mount Govardhan; and Rama and Sita confer with Hanuman.

This is a grand and highly ornamented reception room, constructed by Abhay Singh, son of Ajit Singh, in the mid 18th century.

This elevated room is less accessible and would not have been used for receiving outside visitors. It was probably intended as a private audience hall, where the ruler could confer with his confidants and perform certain personal rituals.

Being open to the breeze, the room could also have served for some leisure pursuits such as listening to music. The architectural style of the interior is derived from the palaces of Shah Jehan, although the outer casing with elaborate jaali work is typical of this part of Rajasthan.

The paintings of the columns and walls are original, but the ceiling and its cornice were repainted in the mid 19th century, in the reign of Takhat Singh. 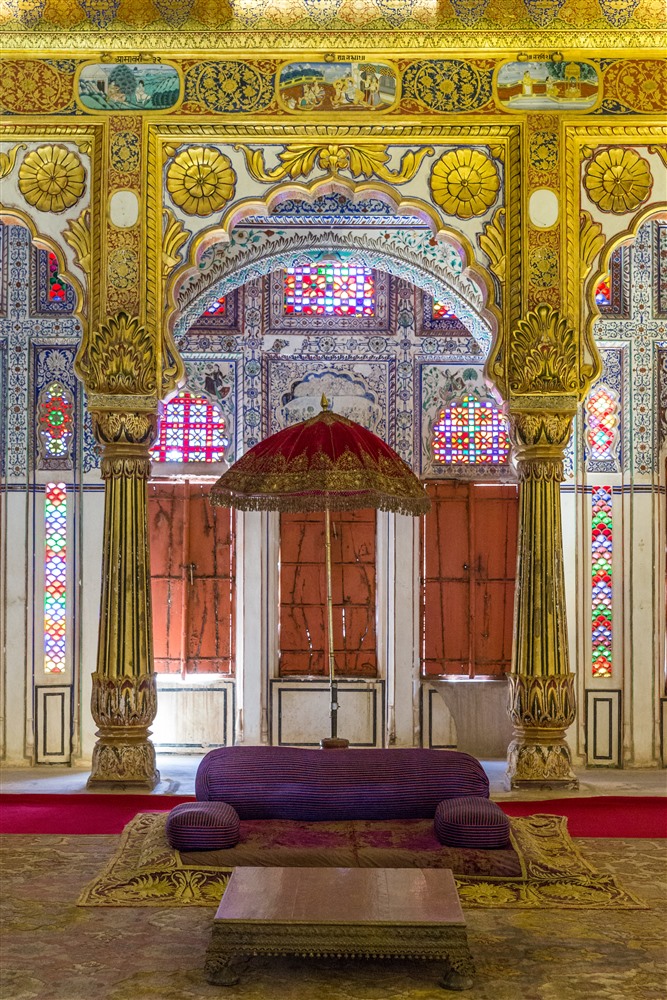 This room housed numerous weapons. The room was packed with people, and I forgot to return to it, so sadly no photos !

This has to be one of the most remarkable interiors in Rajasthan,  and was the personal apartment of Takhat Singh (1843-1872).

It is an unusually large space: there is no need for supporting columns in the centre as the ceiling is carried on great wooden beams that are in turn supported by engaged piers and corbels on the side walls.

All the surfaces including the floor are painted. Even the windows are filled with coloured glass panes, creating quite an eerie light.

This is also a great location to get more views of the fort and the blue city from an elevated height. 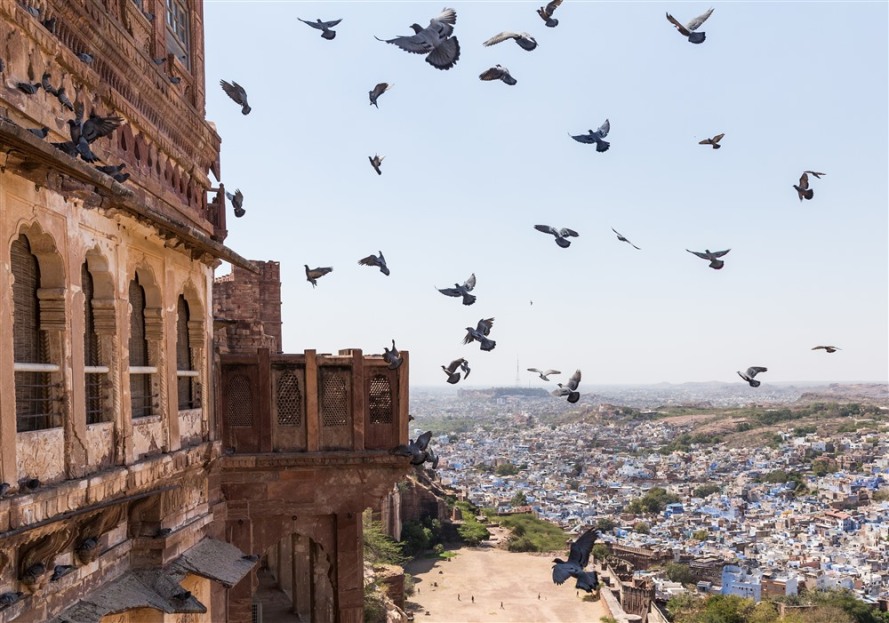 From here the tour takes you through a couple of empty rooms and corridors and a small courtyard with yet more of that amazing carved jeli work. 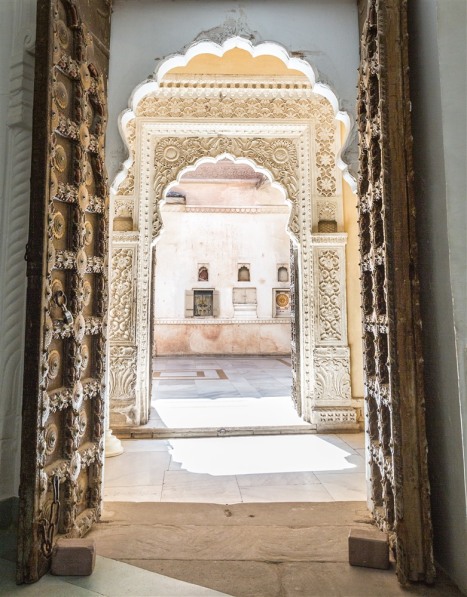 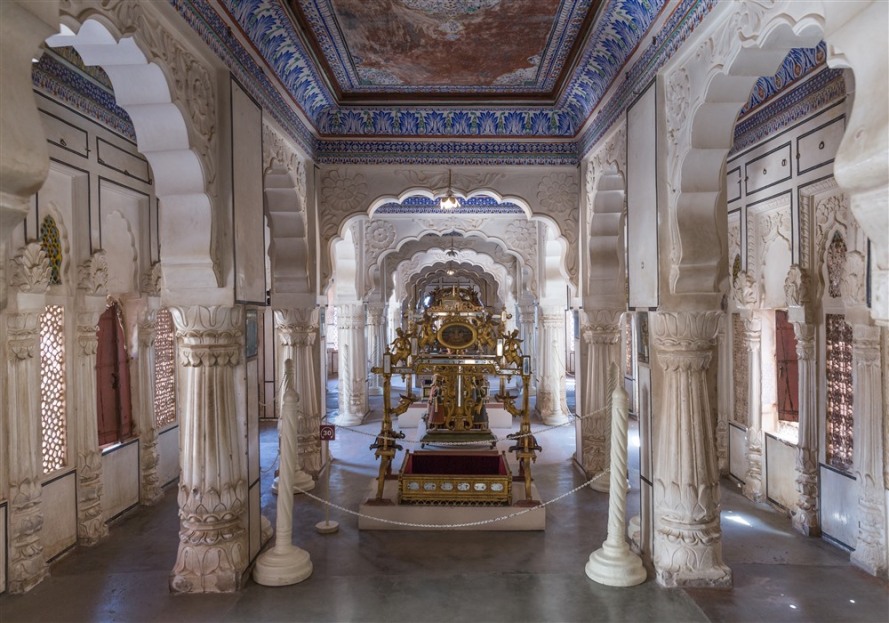 Situated on the upper floor of the north wing, from the Jhanki Mahal women could look down on the activities of the courtyard down below. The room now houses a collection of baby cradles.

Quite rightly, the tour saves the most impressive architecture for the end of the tour. The small courtyard is surrounded by the most exquisite jali carved screens and balconies you could ever imagine seeing, in the lighter yellow sandstone.

This is also the oldest part of the palace complex. 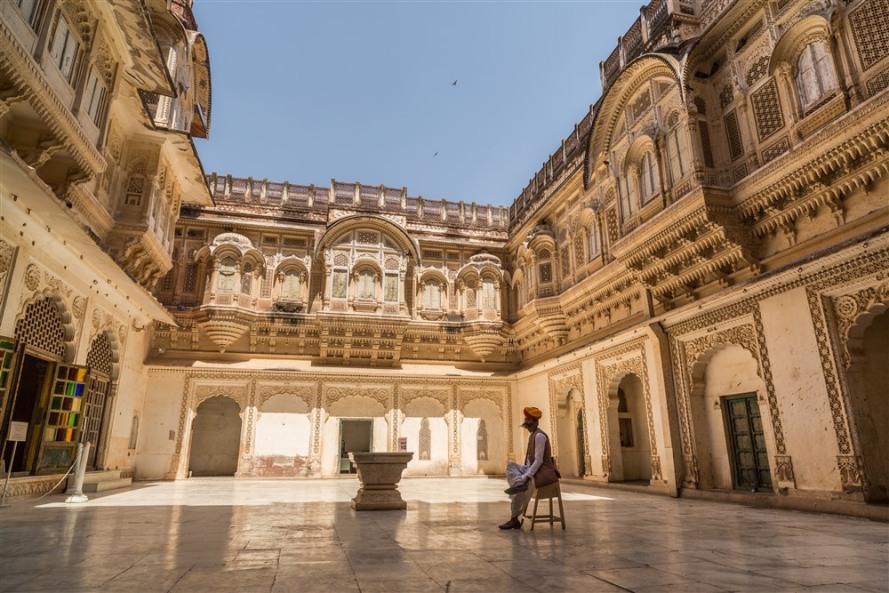 Moti Mahal takes its name from the quality of the lime plaster used, mixed with finely crushed shells, it give the surfaces of the room a pearl-like luster. 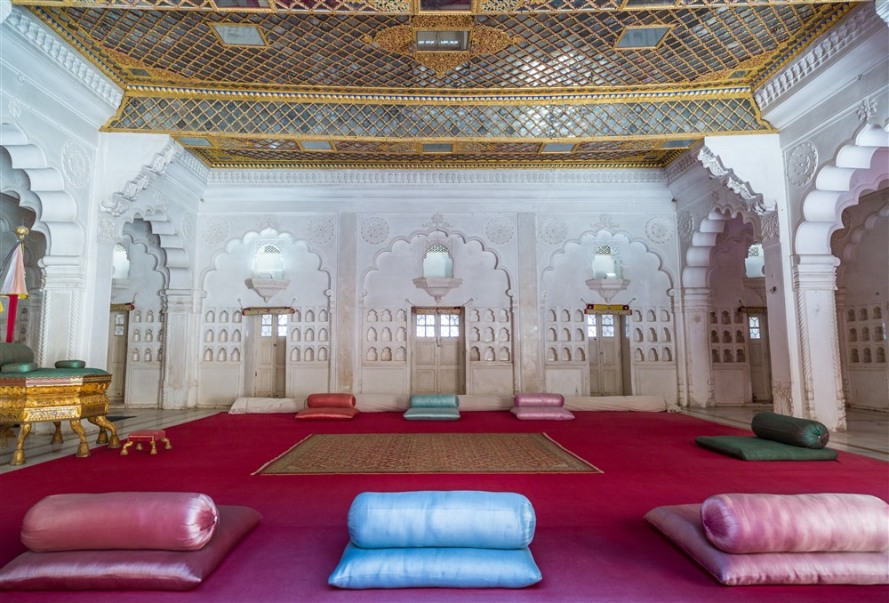 The five deep alcoves on the far side of the room look like decorative architectural features, but they are actually secret balconies. From here the Maharaja’s queens would sometimes sit and silently listen in on court proceedings.

The tour concludes in a final courtyard, with yet more wonderful carved architecture surrounding you. It’s a perfect spot to take a rest before moving on (shopping opportunities await you at the exit!).

There’s also some hidden gems in this courtyard if you take the time to find them, such as a painted door sitting in the corner with faded panel scenes. 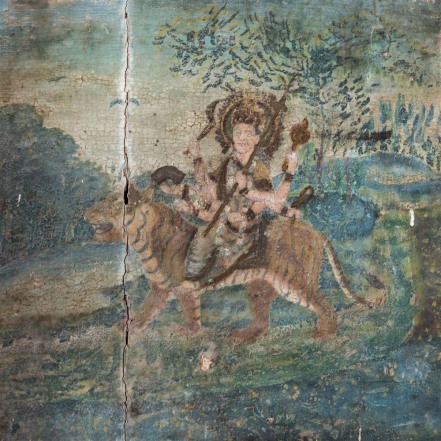 And so concludes the tour of the interior of Mehrangarh Fort. The best time to visit the fort is almost certainly early morning, try and get here as the place opens up and you’re likely to avoid most of the crowds that start descending by about 10am.

The fort is open at 9am and the last tickets are sold at 5pm (but that only gives you an hour, far too short to see all of this !).