With subsidiary temples, entrance-porch, mandapa, three transepts and an internal ambulatory passage, the Lakshmana Temple is the earliest fully-developed example of a typical Khajuraho temple. 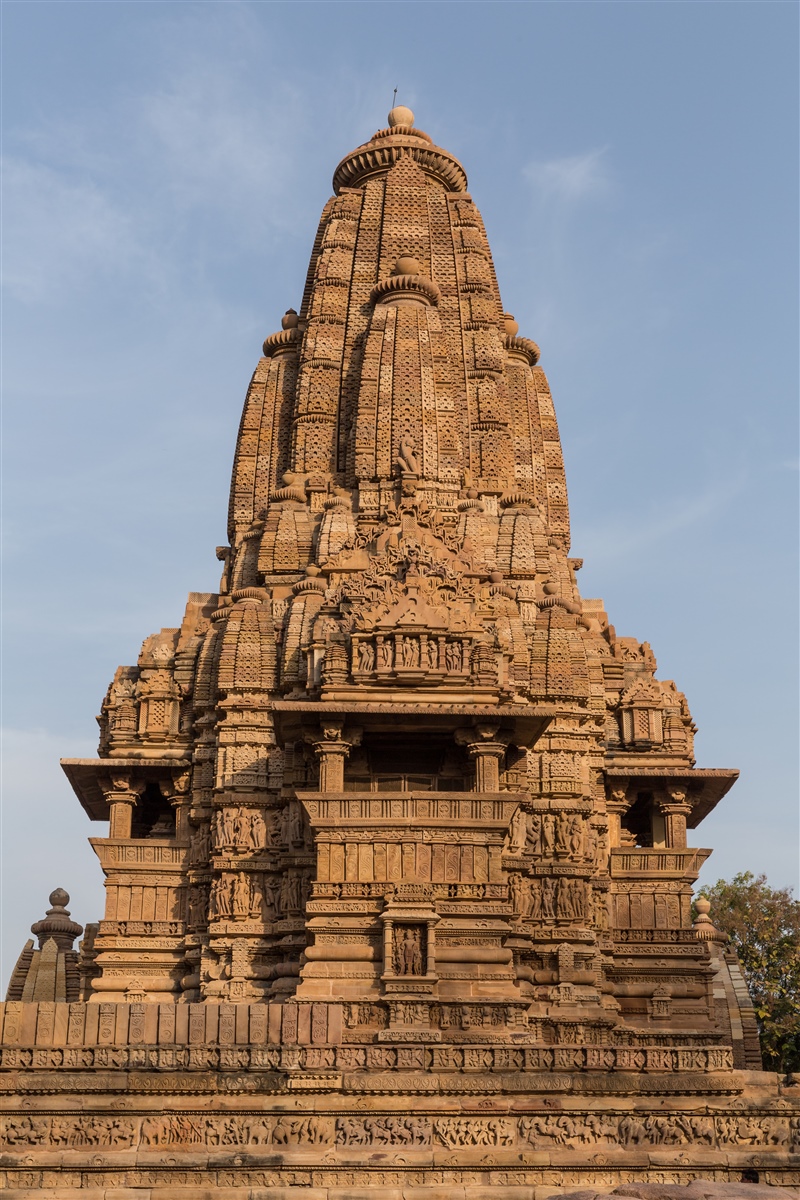 During excavations here a large inscribed slab was discovered at the base of the temple which mentions king Yasovarman died in circa 954 and ordered the temple’s construction. This coupled with the architectural style of the monument gives us a construction date of 930 – 950 A.D, broadly contemporary with the Varaha Temple opposite. That inscription can now be seen in the porch. 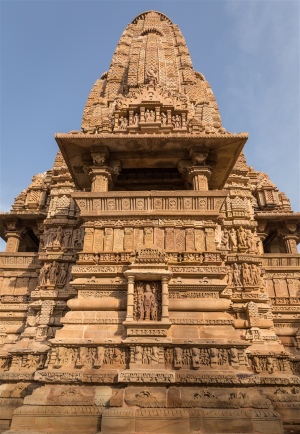 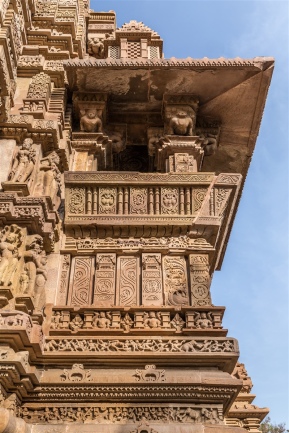 Although not the largest of the temples to be found at Khajuraho, the exuberance and range of carved figures on its external and internal walls are simply stunning.

The exterior wall is divided into two distinct zones (upper and lower) with wonderful sculptures depicting griffins, snake goddesses, apsaras and of course the famous couples in the recesses. The upper zone shows different forms of Vishnu, the lower zone seems to focus on Shiva. 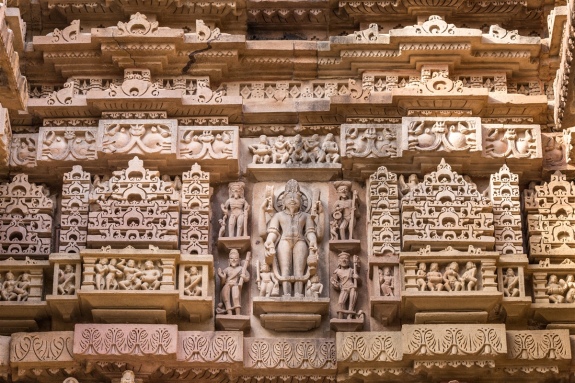 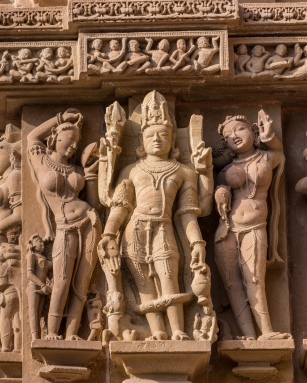 The quality of the carvings, almost in the round, is amazing. The erotica, mostly to be found in the recesses between the external walls of the assembly hall and the sanctuary, are almost acrobatic. The images are carved to a template of complex coital positions, scenes that are in fact repeated in many other temples at Khajuraho. 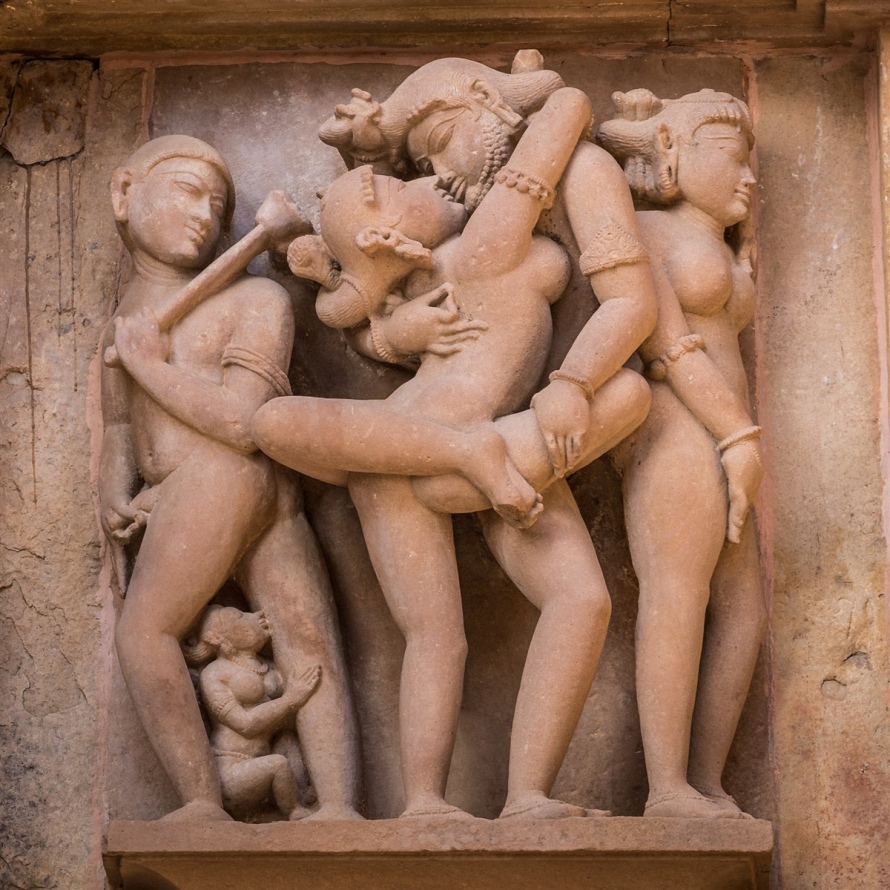 Young women are shown twisting like vines, in variations of what is known as the tribhanga position, when the upper, middle and lower sections of the body are pointing in three different directions.

Why Khajuraho has so many scenes of the sexual act remains largely uncertain, and many theories exist. The guides will say that it’s simply depicting scenes from the Kamasutra, and was used as a teaching aid for those reaching adulthood, but I think we’re looking at a far deeper and more complex context for their existence.

The placement of the erotica seems very specific, some have suggested this may be a kind of visual pub, with the conjoint figures (man and woman) appearing at the architectural juncture (maha mandapa and sanctum) of the temple. 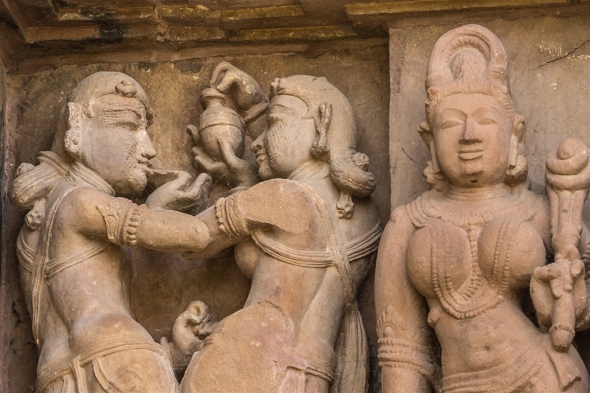 Another notable scene on the south east side is that of two males ecstatically dancing with castanets in their hands. They are often described as homosexuals, and the guides will be keen to make that point, but they are in fact devotees engrossed in Bhakti devotion. 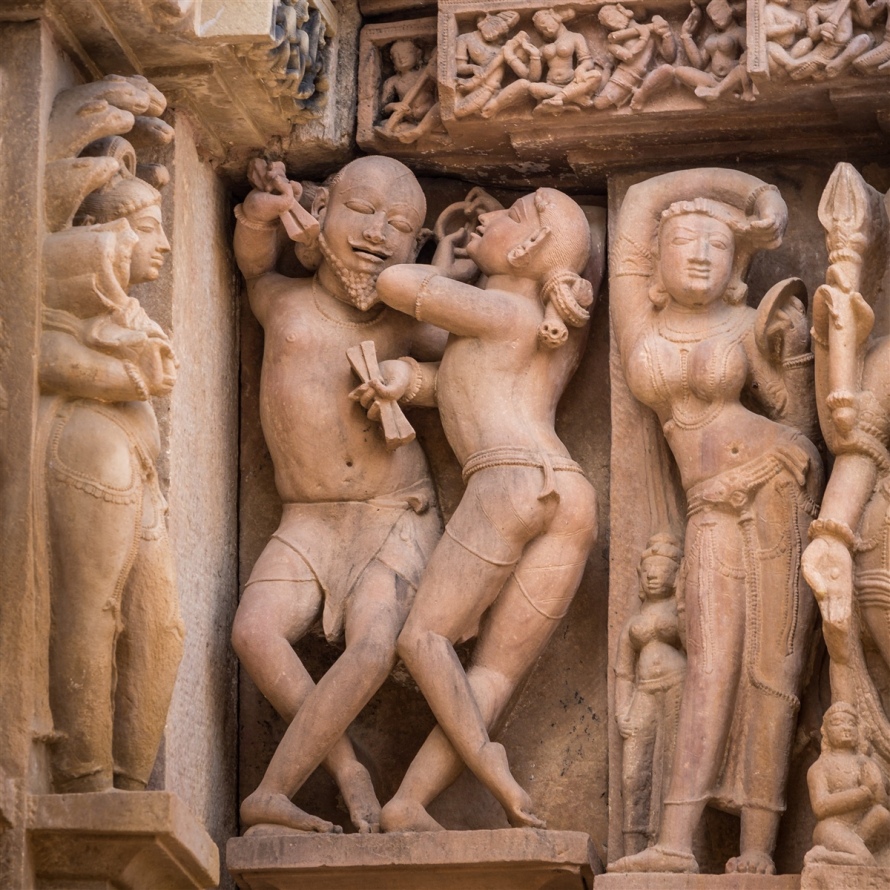 There are also images of women pulling a thorns from their feet, a subject that can be seen at other temples here as well as many of the Khajuraho guidebooks (which frustratingly are not for sale in the western complex!). 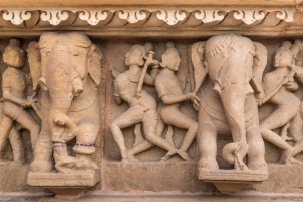 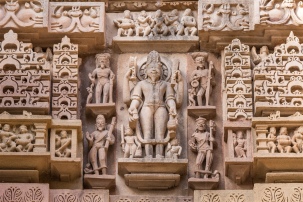 The steps leading up to the shrine have a superbly ornate series of toranas, or entrance gateways. These show the crocodile-like sea monsters known as Makaras, swallowing or spitting out a long line of maidens.

It’s also worth looking up as you enter the interior of the temple to see the complexity and quality of the ceiling decoration.

Inside, the temple enshrines Vishnu as Vaikuntha, with three faces of the lion, man, and boar. The door jambs depict avatars of Vishnu, with Lakshmi featured at the center of the lintel. 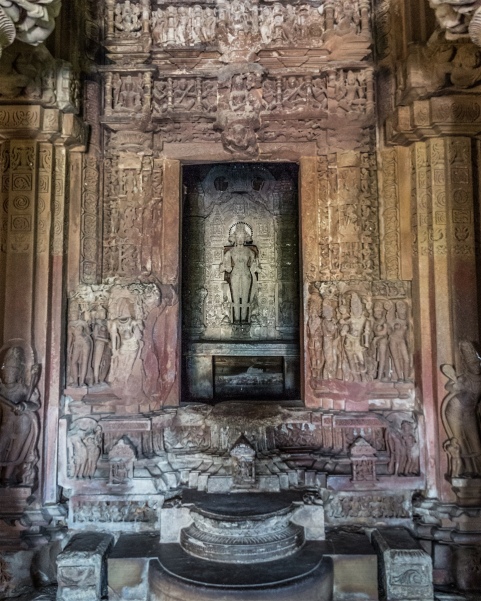 Possibly the highlight for me of this temple was circumambulating the sanctum. Here the light cast onto the cavings was magical, although difficult to capture in low light and without a tripod.

In the three cardinal niches of the wall are incarnations of Vishnu, Varaha in the south, Narasimha on the west, and Hayagriva in the North. 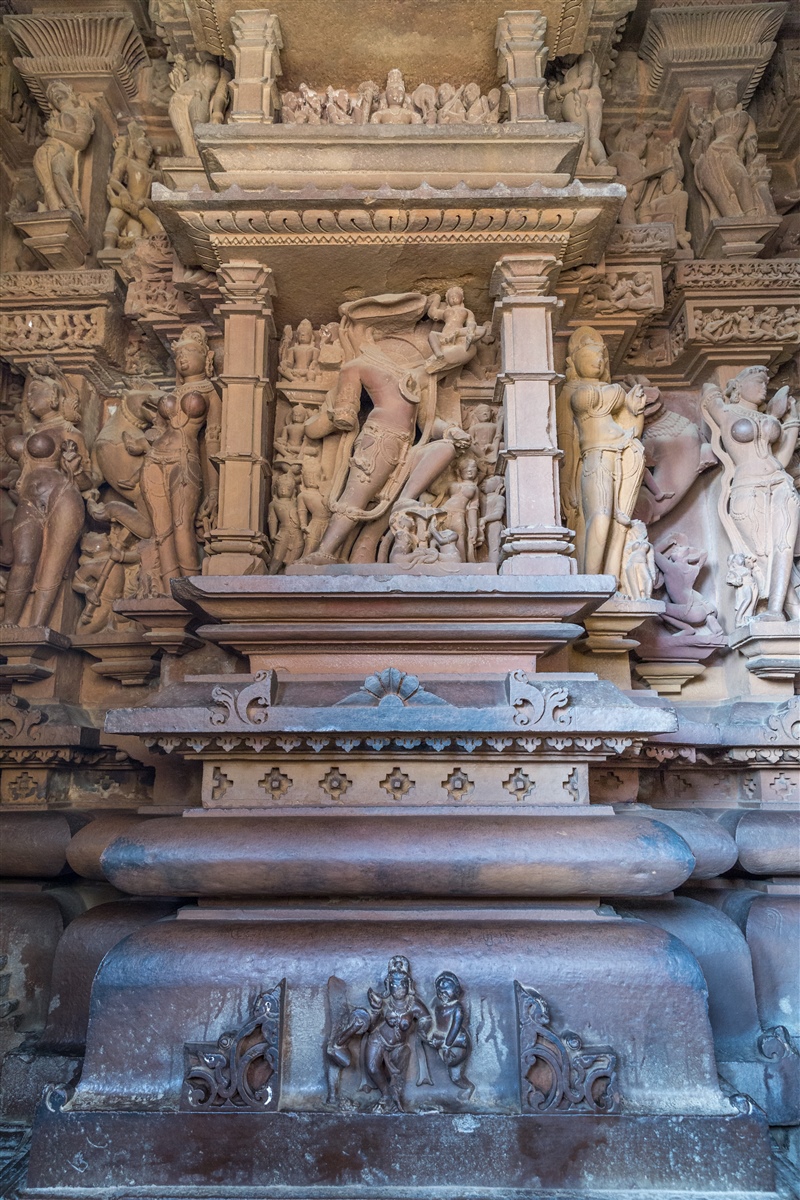 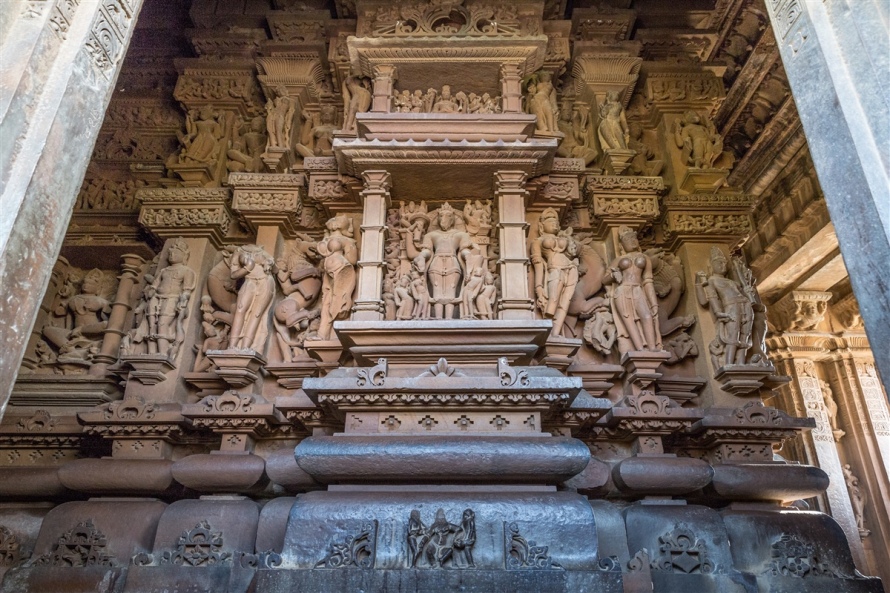 The inside of the temple depicts many Gods and Goddesses. The architect of Lakshmana Temple was attempting to present the temple as Mount Meru, the center of the universe around which the planetary divinities revolve. 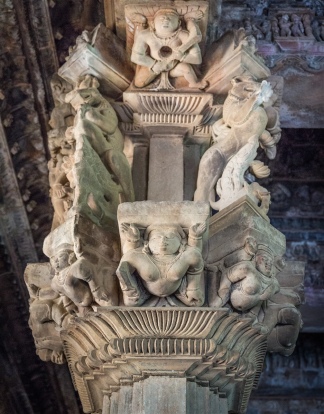 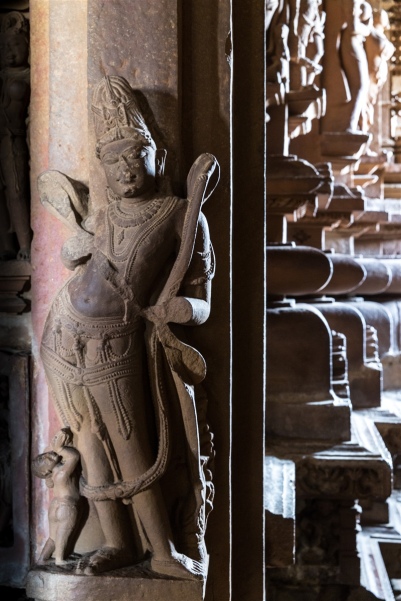 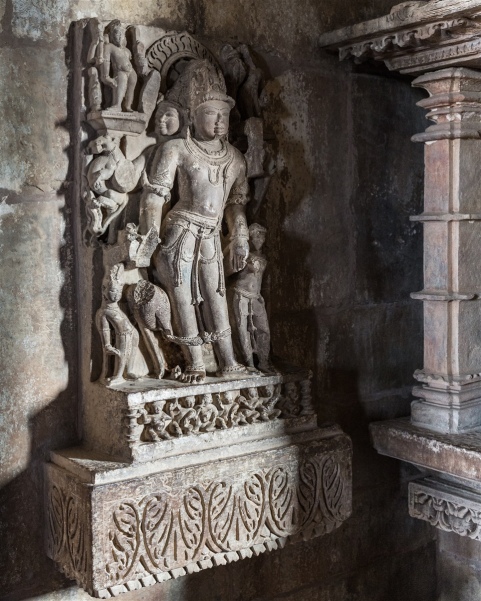 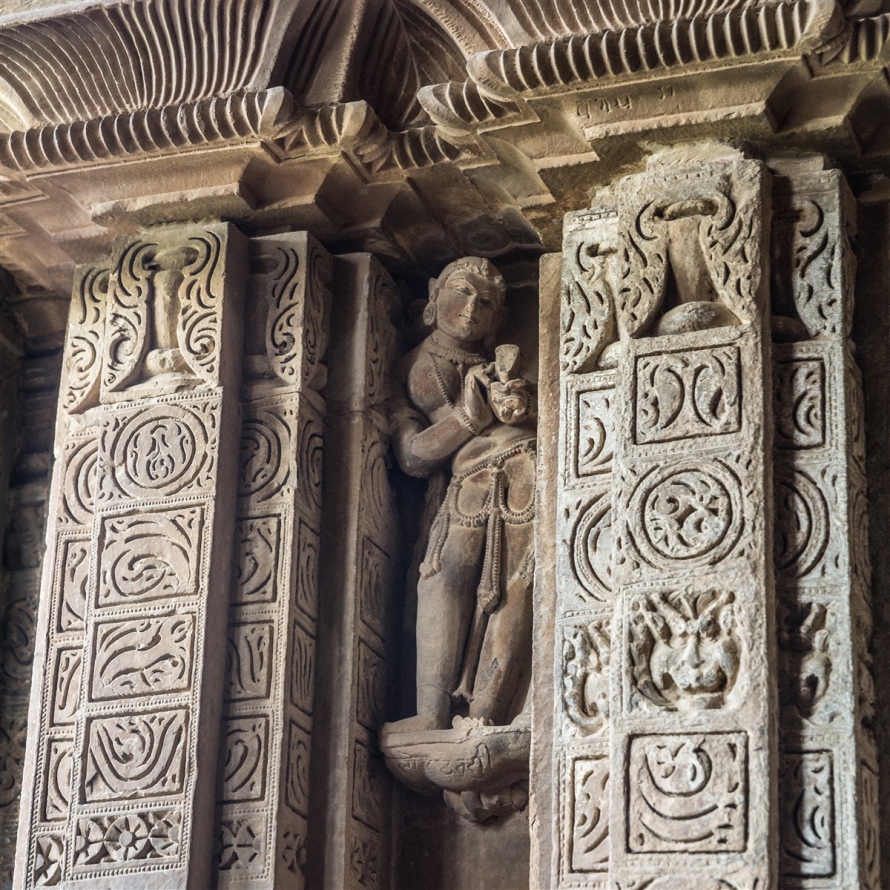 Here the imagery more secular rather than formal, with scenes of battles, traders, dancers, musicians, and a royal hunt. This is in fact the only temple at Khajuraho which preserves sculptural panels on the temple platform. 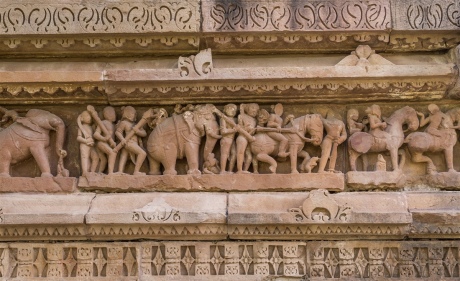 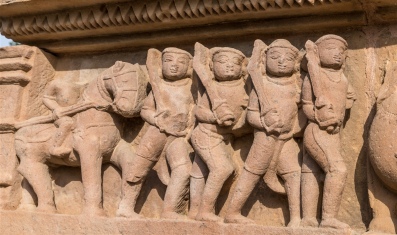 Also worthy of note is the small temple that faces the Lakshmana Temple. This is known as the Devi Temple and now contains an image of the goddess Brahmani, although originally it housed Garuda, Vishnu’s solar bird mount.