My previous visit in 2016 to the Manmodi group of caves was a mixed experience. The light was rapidly fading, there was no signage, and coupled with warnings from locals of large bee populations and possible prowling leopards resulted in me only getting to see Amba-Ambika.

My return visit in 2017 was far more successful. Now knowing how to quickly get to Amba-Abika, I was able to traverse the hillside to the left (heading south for 350m) and within 10 minutes I was at the caves that so alluded me a year ago.

Access to the Bhimashankar Caves only seems possible via a path that runs south (to the left) of Amba-Ambika caves and traverses the hillside. Although these caves are clearly visible from the Junnar-Vadaj road, I don’t believe there is an easier way to successfully access them other than by this route.

As you walk along the side of the hill, you’ll encounter numerous simple cell excavations which will indicate you’re getting close to the main Bhimashankar Caves, which sit a little higher up from the path you’re on. 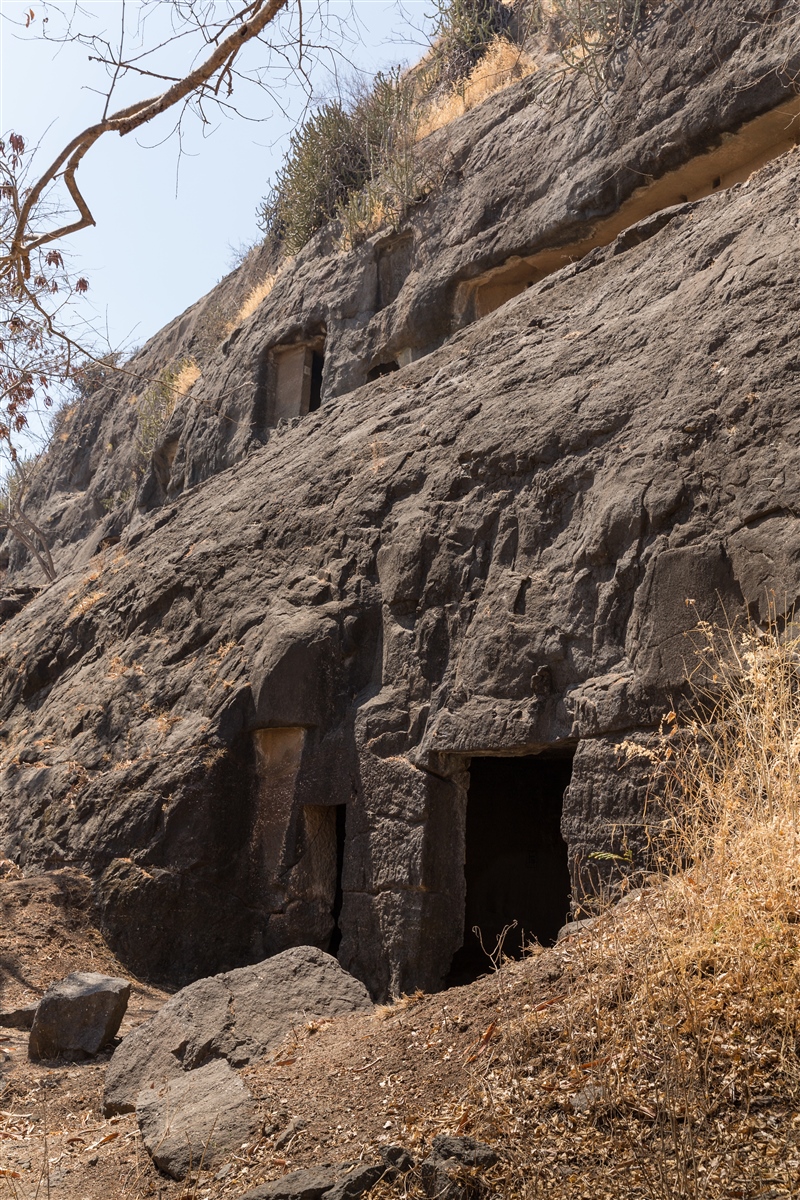 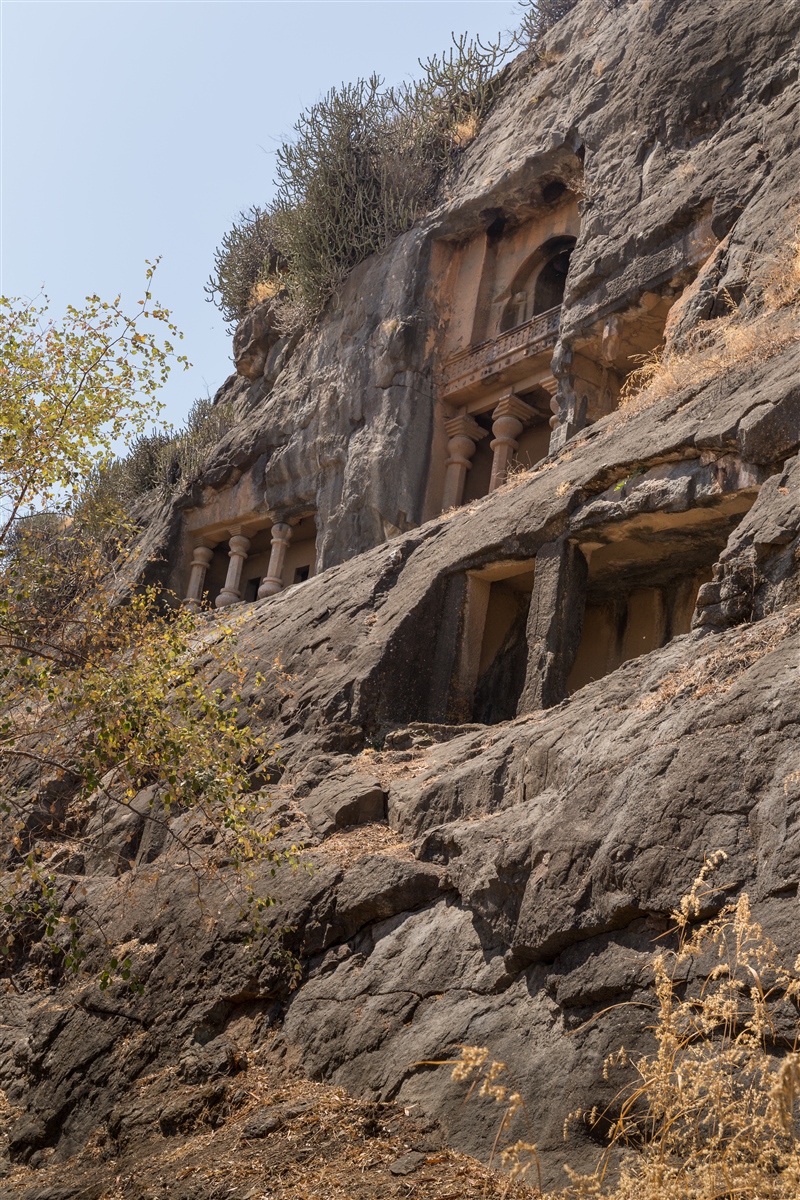 Here there are three main caves that can be easily (safely) explored.

Cave 1 is a layana, or monk’s dwelling, with a veranda and three cells in the back wall. Here you can see what appears to be the old plaster crumbling away from the excavated rock which I imagine may have been also painted at one time. Most of this is in serious need of some stabilising to prevent further damage from the exfoliation that is occurring.

Right next door is the main event, cave 2. This was intended to be a chaitya or chapel cave, but a slit near the ceiling of the present back wall admitted water and it seems the idea of making it a chapel was abandoned. The cave has both an inner hall and a veranda.

The walls and floor of the inner hall are smooth and well finished, in contrast to the ceiling which is rough, uneven, and varying in height.

The flaw in the back wall admitting water appears to have stopped any attempt to carve a relic-shrine. The mass of rock seems to have been left rough and sometime later a sitting female image which is not quite finished and appears to be of considerable age has been carved on the front of the rock. The figure sits cross-legged and its hands and middle are unfinished. It wears large anklets and a necklace, the ears have large earrings and a plain square crown is on the head.

Between cave 2 and cave 3 is a doorway. Over this doorway is an inscription consisting of two whole lines and a portion of a third line. Some of the letters appear to have been lost by erosion from the flow of water above.

The first line had twenty letters, the second twenty and the third eleven of which seven remain. The part preserved reads:

This seems to record a gift by a merchant whose name cannot be made out. Perhaps the giver is the Virabhuti mentioned in the third line. Whether the gift was the doorway, cave 2, or cave 3 cannot be determined. As inscriptions would be normally associated with a significant act, we can probably safely assume it is connected with the chapel of cave 2.

My visit was in late February 2017 which seems to be the peak of the bee season. Both here and Bhutalinga Caves had bees, but there were none at Amba-Ambika Caves. They didn’t pose any difficulties during the visit, but perhaps I was just lucky. Be very aware of their presence however, at first you won’t necessarily realise they are there due to congregating in the cool dark shadows of overhangs that the excavations provide. You will probably hear them before you see them 🙂

The Bhimashankar Cave group consists of ten caves in total, many of which are difficult to access safely. I suspect it may take a third visit and a lot more time to fully explore these.

The easiest way to get down from the Bhimashankar Caves is to head north traversing the hill to the Amba-Ambika Caves, where you can then easily descend through the forest back to the Junnar-Vadaj road. 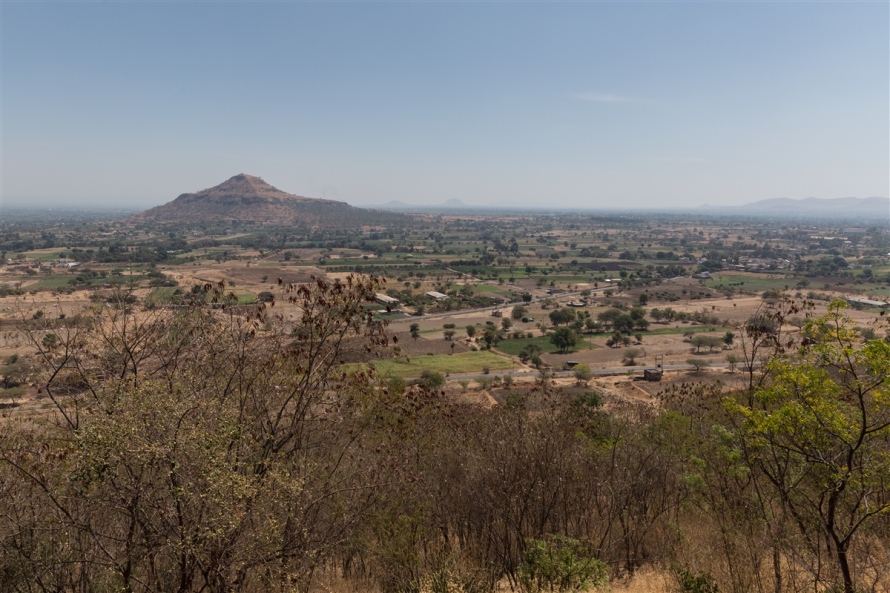 Click here for instructions on how to successfully see all three cave complexes on Manmodi Hill in a single visit.